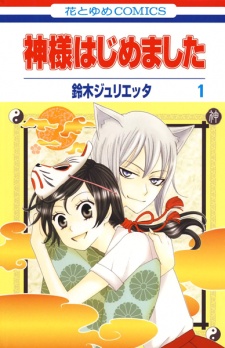 The latest issue of shoujo magazine Hana to Yume has announced that Kamisama Hajimemashita will begin its final arc. It will start in the next magazine issue, which is to be released on January 20.

Drawn by Julietta Suzuki, the series has been serialized in Hana to Yume since July 2008. The 23rd volume was released on December 18, which ranked 17th on the weekly manga rankings in its first week. The manga received its first anime adaptation in 2012 and a TV sequel in 2015, each produced by TMS Entertainment. The series received two OVAs in 2013 and a four-part OVA, which is currently being released, with the third episode to go on sale on April 20.

Have always been interested in this whenever I see it around. Glad I can finally start on the manga now.

It was labeled as both parts, but it was only 28 minutes so that was just Part 1.

Have you tried kissanime.com? I think they have both parts in English subtitles.

Bout dam time; I got bored of keeping up with it.

Ahahhahaa I remember I saw this article and freaked out while crying because Kamisama Haijimemashita was one of my favourite ongoing mangas, but when I opened the update it was a measly extra.

But I read it.

And it was so cute.

Well its been a sweet ride, this manga has been one of my favorites.

Great! When it's done I can finally read it.

No!!! I've been very in love with the manga recently. Though I hope the final arc is good. I doubt they would make a season 3. They are animating the most important arc of the series into a 4 episode ova (which is depressing since it would need like 8 episodes)

Probably my best OTP ever. Sad to see the manga is coming to an end, as for the manga most likely there will be no 3rd season. :c

Soon it'll be time to read it then.

I'm sad, but it had to end sometime, I guess.

though im very sad that its coming to an end, its been great so far and im glad the author actually has a plan as to how they want it to end, so its not another infinite cycle show. kamisama hajiemashita has been a great experience and deserves a resolution. fingers crossed for a great finale.

it has been fun reading this, but i think it does seem like the end is near. maybe a spin-off...but I'm satisfied with the story so far. they won't really mess up the ending given what has happened so far.

I need to seriously read this... I really liked the anime, especially the 1st season.

aww man... but have seen this coming since of the recent story :/

I wonder if I'll ever see this news about kimi ni todoke...

Dat Shoujo art makes the series look like its from 2003.

ainky said:
I still have hopes for a 3rd season.

same, there's so much I'd love to see animated from this series

I'm glad it's ending before being dragged out, I just hope it has a good ending even if it isn't a happy one

Looks like I'll have to start this manga soon.