Sports Manga 'All Out!!' Gets TV Anime Adaptation for 2016 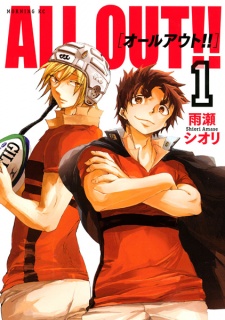 According to a scan to be released on September 22 from the November issue of Kodansha's Morning Two magazine, a TV anime adaptation of sports manga All Out!! has been green-lit for 2016. The series is both written and illustrated by Shiori Amase. There are currently six compiled volumes with the 7th volume scheduled to ship on September 23. The series was launched in Morning Two in 2012 and Kodansha began publishing the series since then.

Synopsis
The story takes place in Kanagawa Prefectural High School. Kenji Gion, a short first year high school student, meets the tall and timid Sumiaki Iwashimizu during a game of rugby. Because of their common interests, they form a rugby club and begin a friendship. However, their heights become an issue as the unlikely pair finds themselves often mismatched.

I have never read this, but I am really looking forward to this! The more sports anime that's released the better!

Haven't read it but I am always up for more sports anime!

I love sports anime. Also have never watched rugby so hopefully it's good!

Not a fan of rugby or handegg, but I suppose I can give it a try. After all, I wasn't that huge with baseball before DnA either.

The only thing I know about Japan and rugby is eyeshield 21, it's mostly slapstick but does understand the rules though not that realistic.

Bruh Rugby!? that's a first for me.

I've only read 2 chaps so far but it doesn't have any gay connotations up till now. Can't wait for this to air <3

Oh my lord! Pinch me I must be dreaming! Been waiting for a Rugby anime for years. Played the game for 9 years, the sport of my people.

Rugby fan here, so there's no way I'll miss this. Hopefully it will be decent enough...

kyouche29 said:
I haven't watched any rugby-related anime, but I might check this one out.

That's because this is the first one :)

The designs aren't really fujoshi catering but neither was Yowapedal and I've seen plenty of that amongst the fujoshits so who knows.
I only ever read rugby bu so that's the extent of my rugby knowledge hah. I'll give it a shot, I've quickly fallen off the sports anime bandwagon, but maybe this will get me back on.

Takala said:
this should be good havent seen a rugby anime b4
Precisely! I don't watch many sports series, or like any at all.

Rugby huh?
Gonna have to wait for more news about this one to see if i will watch it or not.

i was getting tired of baseball anime anyway, now rugby i havent had one with that sport yet.

Didn't even knew there was a rugby manga x)

Monochrome said:
It seems to have some uh interesting art, but what is with this guy's hair

As for this news I'll check it out because manga is taking decades before updating.

And every sport anime till now has been gay af, no point in getting upset now.

I haven't watched any rugby-related anime, but I might check this one out.

WHOA!
amma All out for this one.
Every sports anime is must watch