It was announced on its official website that Takumi Hiiragiboshi's light novel Absolutely Duo will be receiving an anime adaptation. The studio confirmed to be involved with the project is 8bit.

Oh, its one of those super power high school romances.

I was so sure that this would get an anime adaption eventually. Well, I dropped the light novel, it's one of those girl after girl being introduced and having battles around.

Have been meaning to read the LN sooner or later, but unfortunately i didn't have the time. Looks like i'll watch this one, not sure about 8bit being the studio though.

if it's good i will probably start reading the LN

will be adding to my PTW !!

okay? another one that screams generic from the premise to synopsis. i think i will try few episodes to see the execution

It hasn't been approved yet, which is why it doesn't show up in a search.

No synopsis or even a MAL entry?

Whatever I read now is getting an adaptation?

I should start reading a lot more then.

Pretty much how I feel. The days I actually look at the news it's like, "Oh, I'm reading this too." Normally I'd be happy something I'm reading is getting an adaptation, but I've been a bit disappointed with them lately. These mixed feelings...

Waiting on that Oyasumi Punpun adaptation. 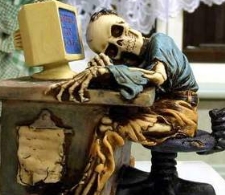 another generic LN getting adapted while tons of great manga accumulate dust.

Moonchipz said:
rederoin said:
Moonchipz said:
All these people who actually find this garbage good and are getting upset over us having an opinion is cute.
Just because you're used to the taste of shit doesn't mean the shit is any good. It's still shit.
LNs are barely ever good, but the rare chance that an LN is good, it's almost guaranteed that it will NEVER get adapted, because actual good stories don't sell, only what panders to otakus do.
It's pretty sad, but it's the state of the industry..

We find your need to post your opinions in every single thread to be annoying. Deal with it.
Why make a thread about it if you're going to get upset over opinions? Do you know how childish that makes you sound?
Also, this is like, the second LN announcement thread I've posted in, so don't lump me in with everyone else.
If something catches our attention and we feel the need to post about it, we will. We're not going to abstain from posting because it might hurt the little kiddy's feelings.

I hate to barge in but I found your statement hilarious.
I wonder who's more childish.

You aren't even making anything specific about the LN, just some vague answer why you hate "shit" LNs.
Stop acting like a toddler having a tantrum.


Anyways...
I wonder if this anime would do the LN any good.
Read a couple chapters from the manga version.
Its interesting at the start with the introduction and setting but the characters felt bland and cliche.

I will definite watch the first 2-3 episodes.

kuuderes_shadow said:
Sometimes I wonder just how sad someone's life would have to be for them to spend hours of every day spewing hate and insults at something just because it doesn't suit their personal preferences.

Some of them are not people, they are AIs made by me and my friends.

LOL, it's always like this in every LN harem Anime adaption thread.
I might watch this shit.

The story seems to a be about revenge, and genre has Action, Harem, Supernatural.

This looks good to me.

Man, I hate anime based in harem LNs, but...these people always complaing about one being animated are way more annoying.


TheNaturalPerm said:
Kabuto90 said:
Kudos to everyone that's not judging something as shit before it even airs.

Getting on topic this doesn't seem too bad. Will definitely check it out.

you can judge 98/100 anime by synopsis, cover and genres alone. anime rarely ever conceals its target audience. that's the kind of medium it is

if they want to market their show to creepy otaku, the synopsis/cover will inform you of that

And that's good, because you can just read it, think: "meh", and move on with your life ignoring it. Instead, people stop in every place they can to complain because that exists now.