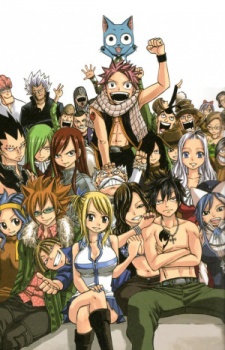 
Kodansha also announced The Sailor Moon Art Book that will feature work from all five Japanese Sailor Moon art books. The book will be full color and have bonus material.


Also, the problem with To Love ru is that there are lolis in that manga and they show them nude on various occasions (Mikan and Nana especially).

So actually, To Love Ru might never make it to the U.S.....unfortunately :(
.

There are a lot of manga and anime with naked lolis in it. I'm surprised a lot of it comes out in English. Also, remember that TLR's anime has already come out in English, as well as the OVAs.


AO968 said:
What's wrong with the title? I think it sums up nicely what the story is all about, and it's a nice play on the whole undead theme.

It's unnecessary. Having a short title, such as "Sankarea", will get people intrigued. They'll think, "Oh, Sankarea? What's this about? *opens up*" However, if you were to name it "Sankarea: moeass zombie girls doing moeass thangs", people will be like "Wut I don't want that filth..." The shorter the title, the more people will check it out. If you're being told what the content of the book is, then you're more likely NOT going to pick it up. What sellers want is for people to actually pick up the book and not just look at it and pass it up.
People will pick up Sankarea and think "What does Sankarea mean? What's it about?" and then read through to find out it's the name of a girl.

If I were to see a manga titled "Undying Love", I'd pass right by it, because it sounds like a badly titled fanfiction.

Trust me: I know marketing.


Brand said:
Yes, and I wrote "Volumes will now be published monthly."

Why couldn't it be the No.6 novel instead ugh

There are PLENTY of English manga where tits are shown.

The problem is that you have to sell it as "MATURE CONTENT".

Also, the problem with To Love ru is that there are lolis in that manga and they show them nude on various occasions (Mikan and Nana especially).

So actually, To Love Ru might never make it to the U.S.....unfortunately :(

There shouldn't be any problems with TWGOK, Sekirei or Sora no Otoshimono though, I really don't know why they haven't released those.

angelfire892 said:
Tokyo Mew Mew A La Mode? Why -__-
Considering that they did omnibuses for Tokyo Mew Mew, it's pretty easy to see why they would do an omnibus of A La Mode.


JustALEX said:
The following manga have STILL not been licensed:

To Love Ru, and To Love Ru Darkness

THE WORLD GOD ONLY KNOWS!

Seriously, what is Kodansha, Yen Press, and Viz waiting for????
100% agree. I would love to have all of them.

Higashi_no_Kaze said:
Any clues on the pace they will be releasing the Vinland Saga volumes?

Not sure but my guess would be a pretty slow release as it is a monthly series. Maybe one every four to six months?

Any clues on the pace they will be releasing the Vinland Saga volumes?

Waiting for the day when they license ONE of Shouoto Aya's works...

icantfeelmyarms said:
Wasn't Fairy Tail already publishing? Pretty sure I see it at Barnes & Nobles every time I'm there .-.

Yes, and I wrote "Volumes will now be published monthly."