Baby Steps is a popular tennis manga/anime by Hikaru Katsuki. It depicts our hero going through multiple changes in, you guessed it, baby steps. Let's have a look what kind of lessons we can get out of Eiichirou's accomplishments.

Baby steps: the first steps towards a surmounting goal. This is the story about Eiichirou Maruo, a studious high school boy who dreams of becoming a professional tennis player. This tennis story originating from 2007 has came a long way since its debut. In full stride, this series showing no signs of decline with 30 volumes of manga, a successful anime with an upcoming second season, and scores of fans.

Like many other sports anime, it portrays the hardships and obstacles the protagonist faces during his journey. However, unlike most other anime, Baby Steps is truly unique in a sense which we can learn a variety of lessons from “Ei-chan” which can be applied to real life.

So further without further ado, let’s get straight into it! 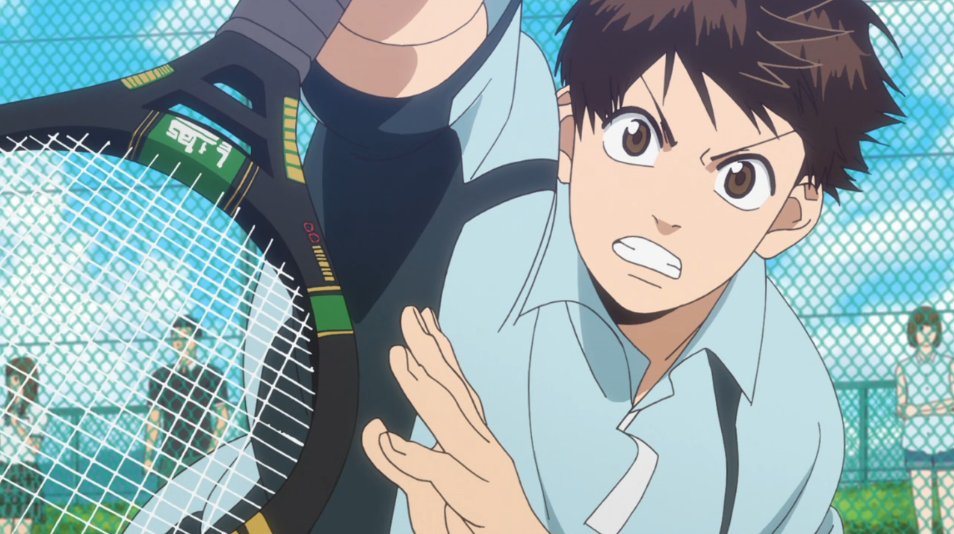 This is something dead simple, yet commonly avoided. Unlike main characters of other sports anime, Maruo doesn’t have special powers or natural-born talent, especially when compared to his predecessor, the main character of Prince of Tennis.

Eichirou, called "Ei-chan" by his friends, starts off as a complete newbie to tennis, having no experience in any sports whatsoever. But he falls in love with the game, and makes becoming a profession his goal. In order to achieve his dreams, he practices tennis for hours each day－and slowly but surely, the results start to show.

2. You need to have passion. 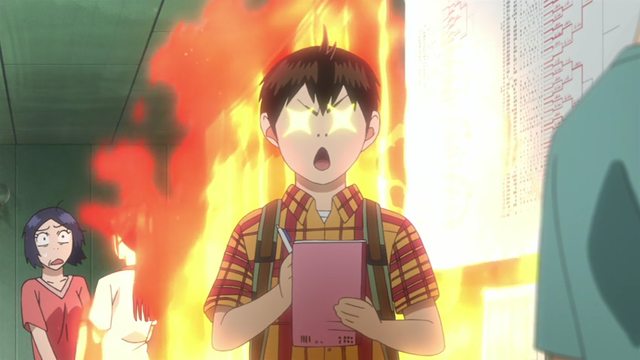 Ei-chan starts his journey from as a directionless young man. He had no real hobby or passion, and studied all day long because he had nothing better to do. Without meaning in his life, he wasn't very happy. But after meeting Natsu and starting tennis, he changed. The passion he developed for the sport lit a fire within him.

Everyone can find a passion in at least one thing in life. All you have to do is keep an open mind and take chances! Who knows; you might just find your passion in the strangest of places!

3. Have a well thought-out plan. 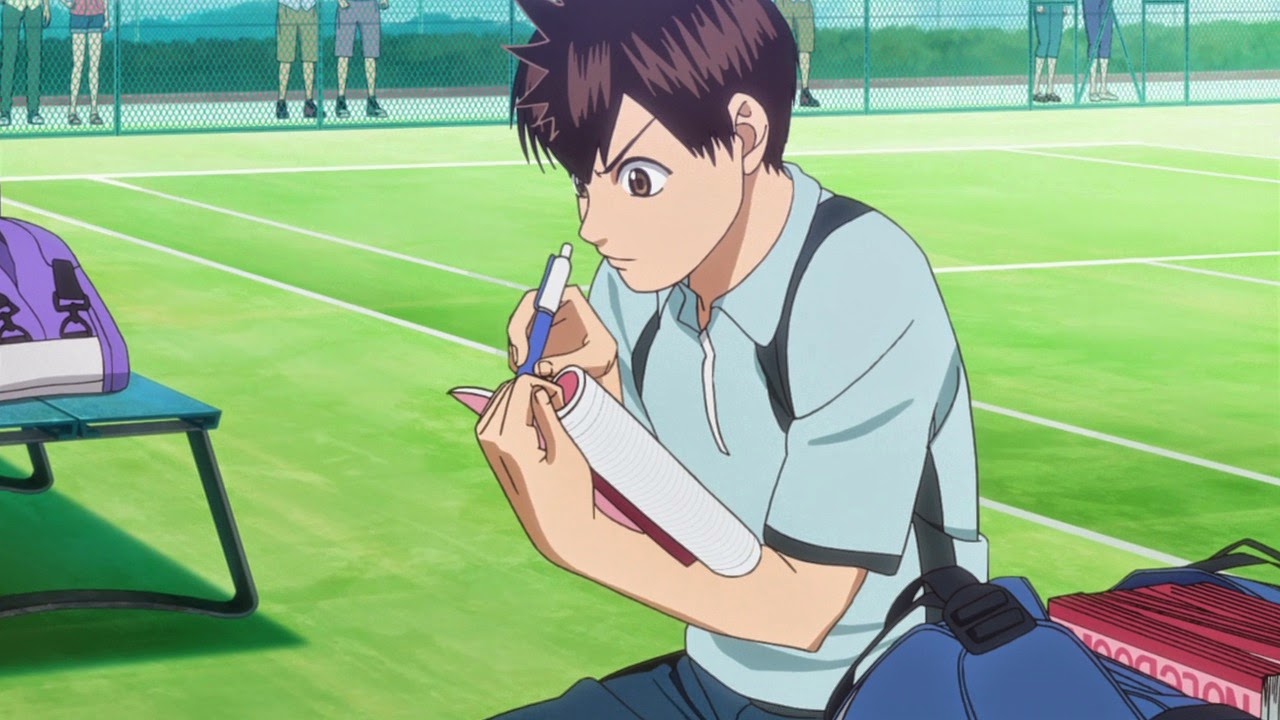 Almost every protagonist in a story is unique. Some might have special powers and/or attributes. In Ei-chan's case, his is using his brains and notes to note everything about he noticed. This might seem underwhelming, as in the history of sports anime no other character has gotten stronger purely by “thinking”. However, in real life, this is a significant step to improve. The mental process behind an action is just as important as the action itself.

Let’s think about an example here. Say for instance we have someone who is really passionate about chess, a classic game which involves lot of thought. People can improve by learning the rules and doing many chess games to gain experience but there is always a learning curve which cannot be crossed unless you think through it. It might be thinking 1 step ahead, which then turns to 2 steps ahead and so on.

Sure, you may be able to go through the motions, but only when you understand the causes and reasoning behind it do you truly become an expert. Acting instinctively can only do so much.

4. Make the most out of your environment. 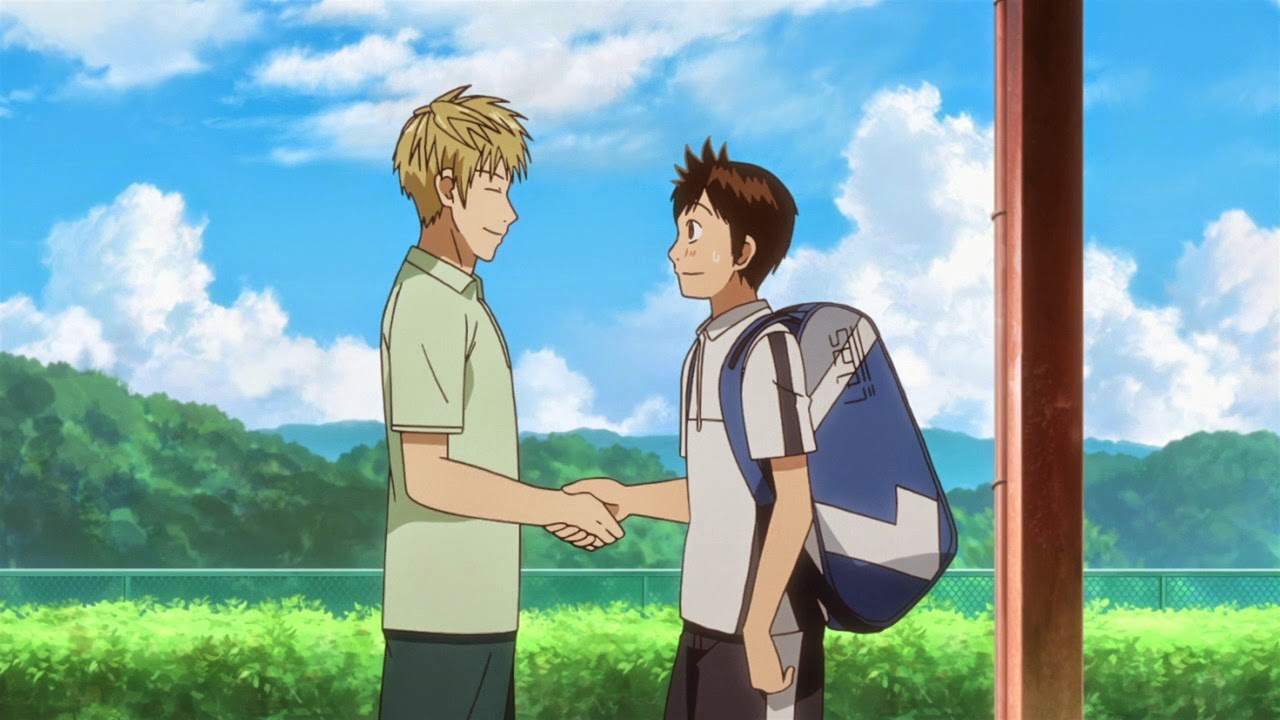 Ei-chan is blessed. Unlike many of his rivals, he did not go to a tennis club with a hostile environment, and hadn't experienced extreme rivalry that could have led to episodes of demoralization and discouragement. In fact he went to the best tennis club the prefecture can offer.

The main reason Ei-chan became successful was that he took full advantage of his environment. He trained with Takuma Egawa, he made friends with those more advanced than him, like Yukichi Fukuzawa, and he used the knowledge of the coaches. By being proactive about talking to his peers and superiors, he made great friends that were also great mentors. Whatever resources are available to you, make the most out of it.

What about the people who aren't in a good environment? Again we can learn from Ei-chan: change it! Just because you are in one place doesn't mean you are stuck there forever. Remember the time he went to Florida to be stronger? It will be hard to change your settings, but it's not impossible. Drastic changes will not occur unless you have the will to change drastically. 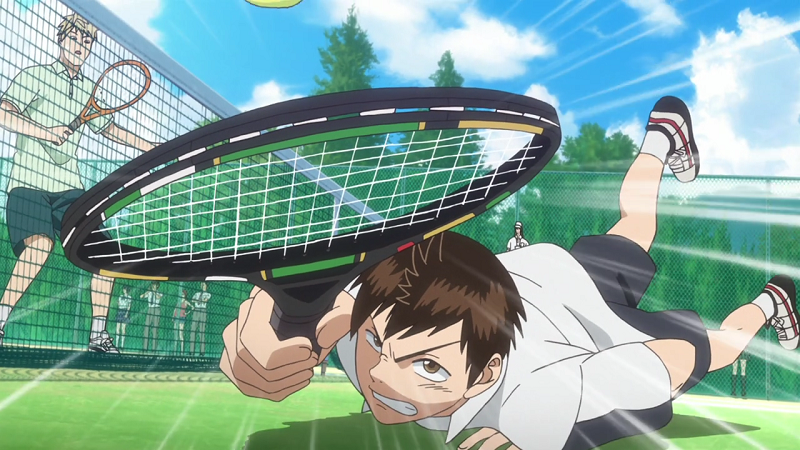 Ei-chan has produced some amazing matches and some amazing comebacks. He doesn't give up even when the situation looks bad, assessing the situation and trying to do everything he can before the match is over. The game isn't lost unless you run away without facing the challenge.

6. Learn from your mistakes. 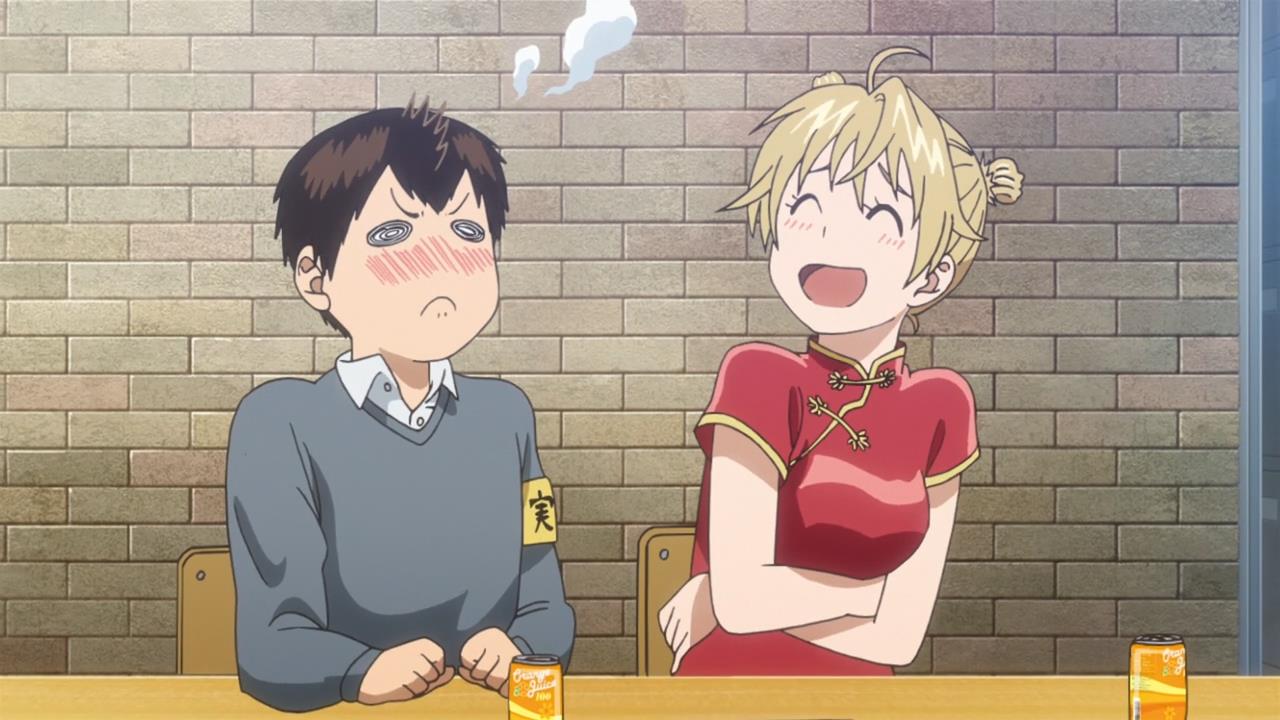 It isn't easy to reflect and accept your own failures, especially when high stakes are involved. But if you don't, it is likely that you will make the same mistake again. Whether you take notes or meditate, being able to look back on your actions and think about what you should improve next time is a key skill in life! 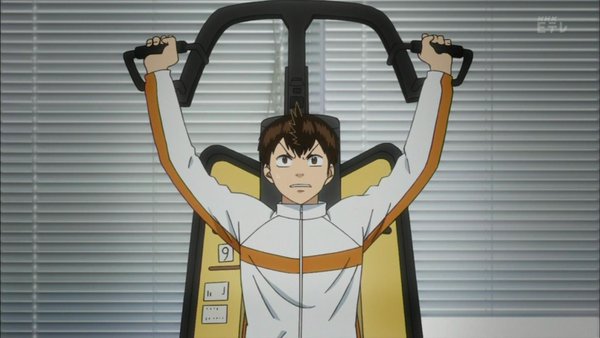 You don't need to stick with the same routine all the time. Sometimes it's important to mix it up a little to make things interesting. The last thing you want to become is a shallow-minded person with closed views right?

Take the STC training routine, they often mix things up, with one day focusing on shots, even trick shots like the Federer special. Then there are times when they do matches against many different opponents. In the training center in the US they do matches along with gym training, visual training and even mental training!

Many of these training sessions open new doors for Ei-chan to discover his potential. Don't you want to try it too? After all, variety is the spice of life!

8. Take care of yourself 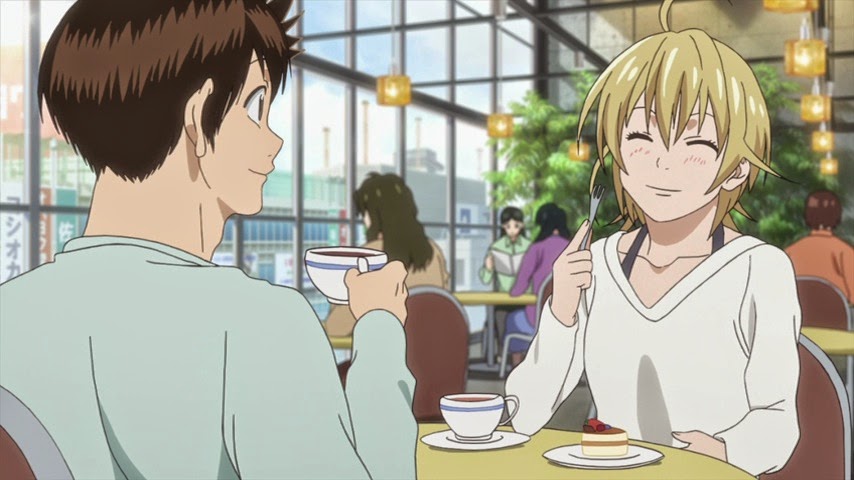 Baby Steps is an interesting anime, as it places as much emphasis on training and other events as much as the actual matches. Here Ei-chan has had 2 coaches which has led him in his tennis journey so far, Coach Miura and Coach Aoi. The latter, Coach Aoi, told us the importance of being fit and healthy as he himself has suffered from chronic injuries which has forced him into retirement.

The lesson that we can learn here is that yes, we can accomplish a lot of things. Yes, we have the potential to success, and yes, everyone who strives will find a way. But it is worthless if you have to pay too high a price. It could be your health, or it could be your relationship with someone important. Never forget the balance that you need to take care of yourself to ensure what you are pursuing is worth it. 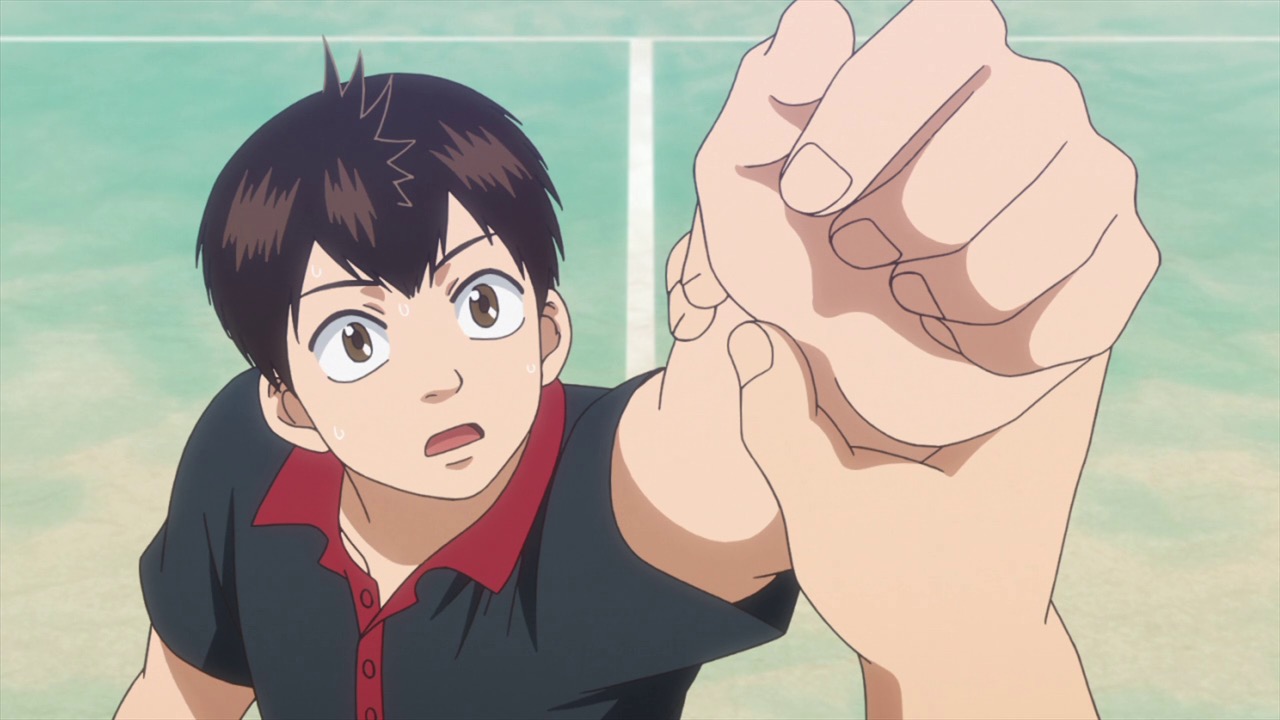 It is said that you become an expert only after you spend 10,000 hours on something. No matter how good you might be at something you need time to polish your skills and practice to get better at it. In Baby Steps, Ei-chan and his peers practice a lot. As the story takes place over a number of years none of them suddenly rocket to fame after inventing a new trick shot. Sometimes people get lucky, but in general, you have to work for your goals! After all, Rome wasn't built overnight.

10. Don't get discouraged over other people's success. 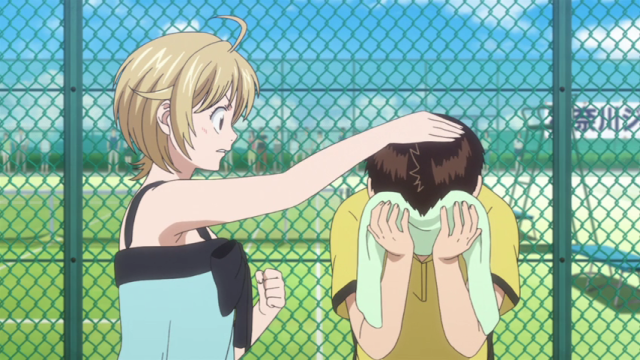 Life is just unfair sometimes. Just because you worked hard for something does not mean you will necessarily achieve your goals. The same goes for many characters in Baby Steps. There can only be one winner and the rest are the losers; for every victory there are many more defeats in the world.

But just because you lose doesn't mean automatically that you are a failure. You might have lost something, but in return you have gained something. In the anime, Miyagawa may lose a game, but he gains mastery over his drive volley shots. Iwase discovers what his true passions are, and so on. Not being in first place doesn't mean that you aren't a winner.

The opening credits end in the lyrics, "So believe in yourself". To quote Nike, "Just Do It." Pick yourself up when you fall, and try again!

In summary many of you might be thinking “Thanks for stating the obvious!”. However many times it is these simple points that we forget in our daily lives being bogged down with everyday duties of life and work. But looking at Ei-chan it reminds that humans are an incredible specimens and we can achieve anything!!!