While waiting for their father at a bus stop one night, Mei falls asleep on Satsuki's back. Suddenly, Totoro appears and stands right next to the sisters. Rain is pouring from the sky, but poor Totoro only has a leaf atop his head to keep him dry. When Satsuki offers him their extra umbrella, Totoro gamely holds it aloft. Delighted by the sound of the falling raindrops, he literally jumps for joy, startling Satsuki and Mei. He also makes some adorable, typically Totoro-like noises. When the catbus comes, Totoro boards, along with his new umbrella.

What makes this scene so memorable? Let's find out! 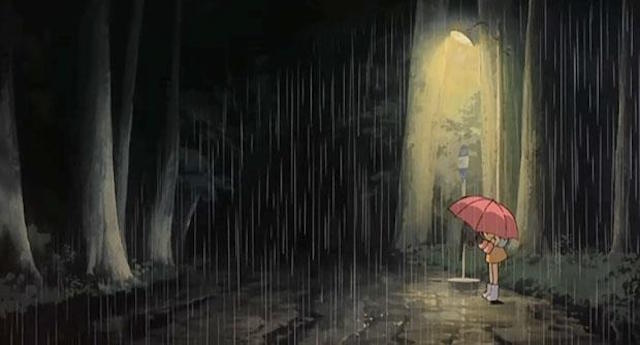 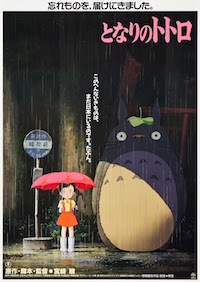 As you can see from the Japanese theatrical poster, and from the image above, the setting of the scene is actually kind of scary. It's a dark, rainy night; two young girls are all alone at a deserted bus stop. While they wait for their absent father, a giant beast, with huge claws, comes upon them! Now, doesn't this sound like the set-up for a horror movie?


But of course, this is Hayao Miyazaki, not Satoshi Kon. Totoro turns out to be nothing more than a cute, cuddly spirit animal, benign in every sense. The scene, which has the potential to be frightening, works so well because its tone is the complete opposite of that—instead, it is adorable and funny. One of the major reasons Totoro remains so beloved, even to this day, is that he represents the innocence and magic of childhood. Similarly, the scene is so iconic because it readily showcases his playful, childlike nature, in contrast to the fearful monster he could be.

The Connection with Nature 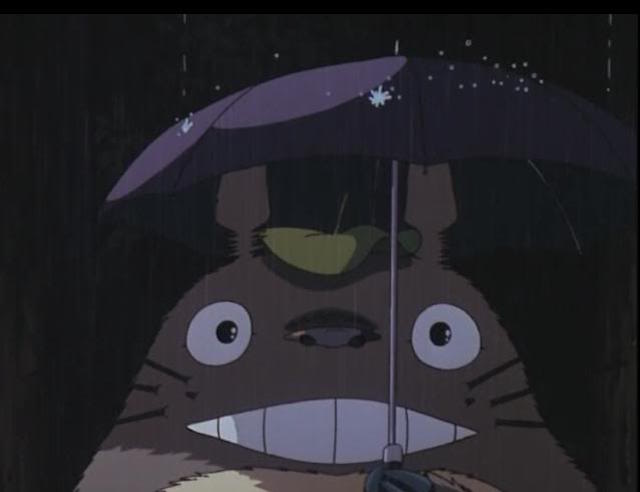 As a spirit of the forest, Totoro naturally has a deep connection with nature. In the aforementioned scene, the fact that he only has a leaf to cover his head from the rain is a source of humor. However, it doesn't seem that he is particularly bothered by the rain, and even after he receives the umbrella, he still revels in the patter of the raindrops. It's no coincidence that this scene is set on a rainy night, for just as the rain gives life to the forest, so does the forest give life to Totoro.

Totoro is a mysterious figure who doesn't speak, but roars and uses his large frame to wordlessly express his pleasure at the sensation of rain on his furry body. He enjoys the sensation so much that he jumps to cause even more raindrops to fall down. In the scene, the rain serves as a symbolic backdrop to clarify Totoro's true nature. Although he accepts Satsuki's gift of the umbrella, he doesn't actually need it; he receives it out of friendship. In return, he gifts her a packet of nuts and seeds, which can also offer shelter from the rain—that is, once the seeds grow to become trees. What a perfect gift from a spirit of the forest! And it emphasizes just how important nature is in the world of My Neighbor Totoro. 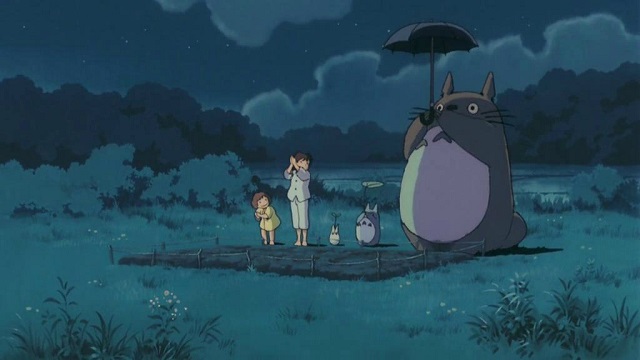 I hope you enjoyed these thoughts on the enduring popularity and fame of My Neighbor Totoro's bus stop scene. Totoro standing with an umbrella in the rain is an iconic image because it encapsulates the charm and whimsy of the film. It can always bring a smile to my face! 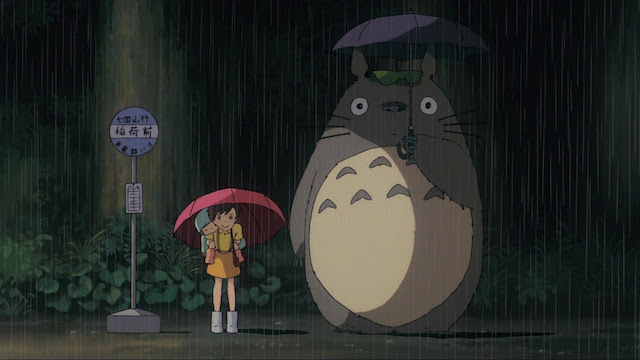