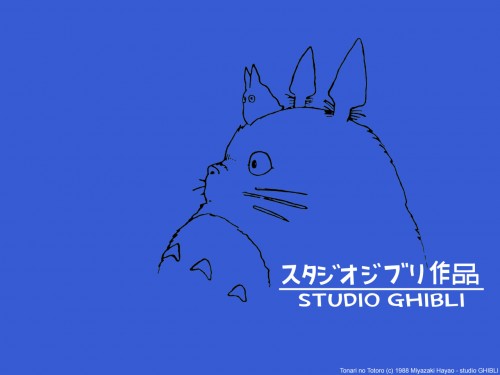 My Neighbor Totoro is probably Hayao Miyazaki's most famous film—which says a lot, considering how famous his other films are! In fact, Totoro has become the mascot for Studio Ghibli, and even features in the official logo of the studio. The character of Totoro is incredibly well-known all around the world. Merchandise bearing his likeness includes plush toys, pillows, keychains, pajamas, backpacks, socks, hoodies, phone cases, and much, much more. He is a surefire hot property, although the character actually appears only briefly throughout the movie.

What makes him so appealing? Why, his cuteness, of course!

Is It Wrong to Be Jealous of a Baby? 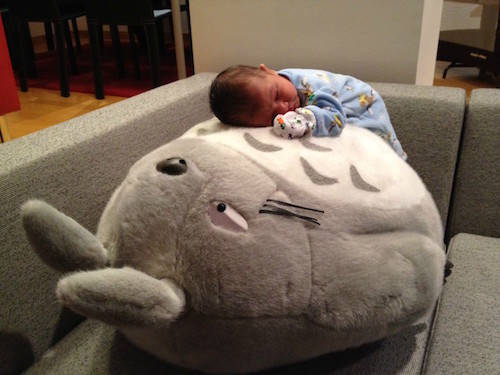 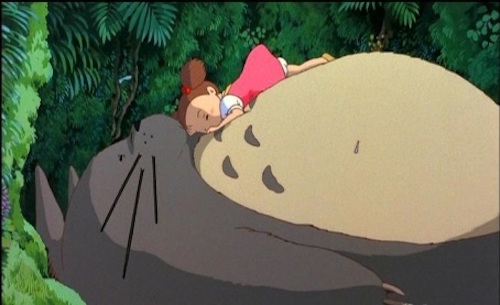 The huge success of Totoro as a character is definitely owed in large part to his unbelievable cuteness. Everyone who sees the film wants a Totoro for themselves—and why not? Just look above at this squee-inducing re-creation of one of the most kawaii scenes from the movie! I've never been jealous of a baby before, but there's a first time for everything... 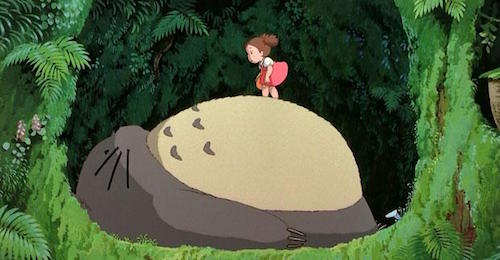 How can a fictional character be this adorable?! It's impossible!

Totoro looks so confuzzled here, and I love it. 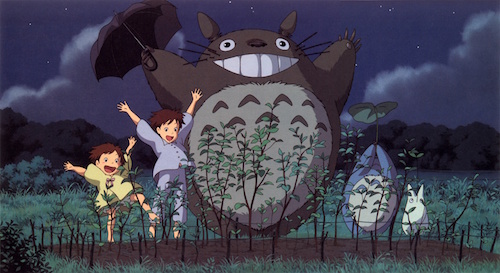 Totoro is just like a big balloon! The tiny umbrella in his paw really adds a nice touch.

This ceremony requires solemnity. But Totoro still can't hide how fluffy, soft, and cuddly he is.

Awww, Totoro is trying so hard. He really cares!

...I have no words. Too cute. Brain has melted.

Mei Is No Slouch in the Cuteness Department Either 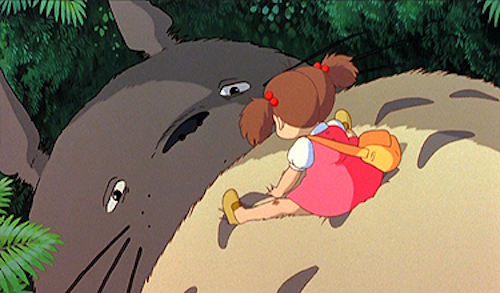 Mei falling asleep on Totoro's big belly is definitely one of her cutest moments, and one of the cutest moments in the entire film. 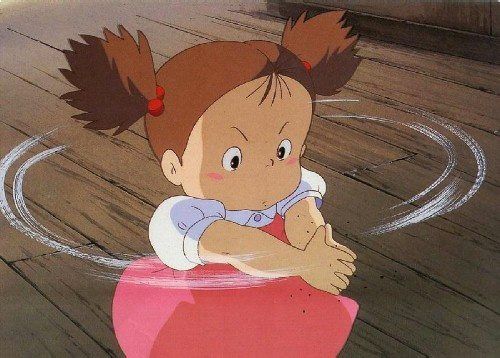 But make no mistake: she's adorable just by herself too! 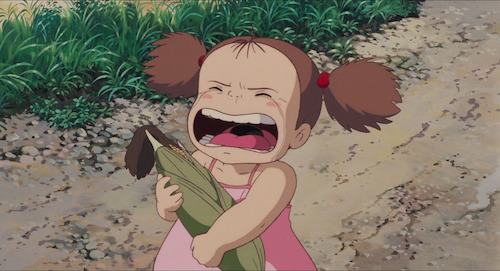 Mei's facial expressions are truly hilarious, even when she's crying her eyes out. 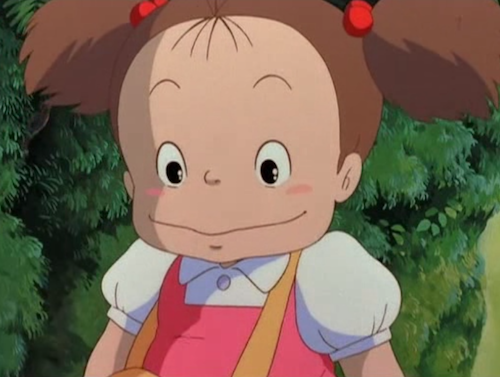 I just want to squeeze her cheeks and tug on her pigtails! 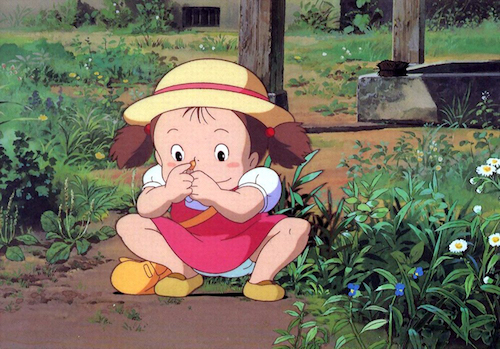 KAWAII! Mei missed Satsuki so much! This sisterly relationship is one of the cutest ever created.

Really, their whole family is just adorable. The way Daddy Kusakabe loves and cares for his girls is truly heartwarming. 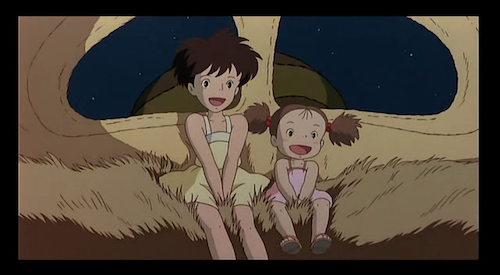 Satsuki and Mei ride in style on the Catbus. 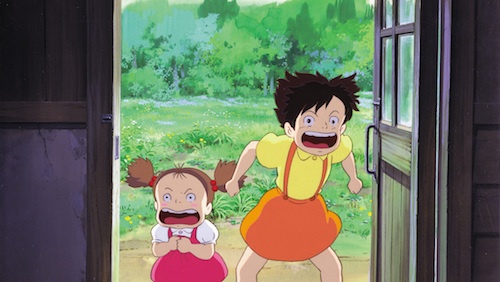 Satsuki and Mei have so many adventures, yet they continue to see everything with a sense of wonder. How beautiful a child's view of the world is! 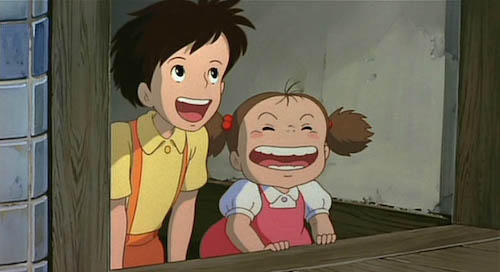 The Other Spirits of the Forest

The other "totoro" spirits may be smaller than Totoro, but they are just as kawaii!

How adorable that they look up to their big brother Totoro, and follow him around like this. 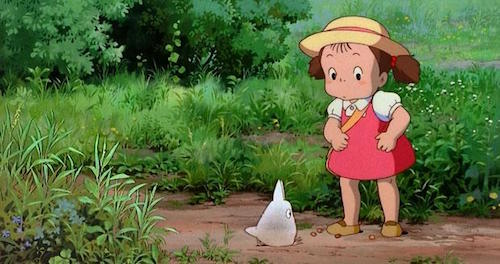 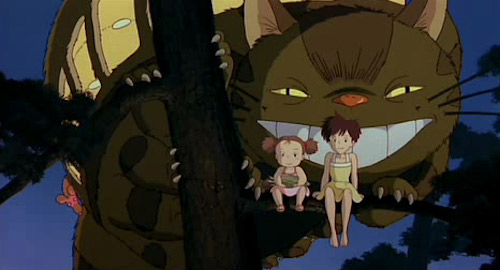 Really, this post could have gone on even longer! My Neighbor Totoro is one of the most lighthearted, joyous, and magical films I've ever seen. It's full of cute characters, cute moments, and cute images. No wonder Totoro is so popular everywhere he goes—he's a friend to anyone who needs him. His lovability transcends the boundaries between his fictional world and our own reality. He is so KAWAII!