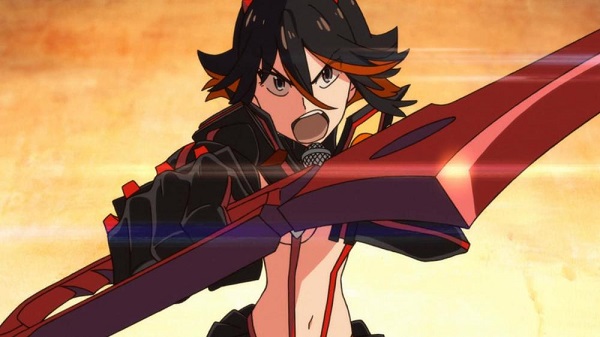 Ryuuko Matoi isn't your average high school student. She's watched her father die and brawled her way from school to school all across Japan. Like a modern-day Miyamoto Musashi, she's never lost a fight. But she wields an unusual weapon: the crimson Scissor Blade, a keepsake from her murdered father. Ryuuko's Scissor Blade kicks off the plot of Kill la Kill, setting her on a course of revenge and discovery as she searches for the Scissor Blade's other half. Find it, and she finds her father's killer. 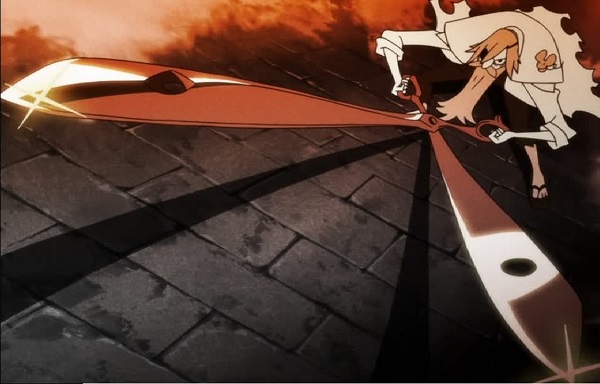 One of Japan's foremost scientists, Ryuuko's father Isshin Matoi devoted his life to studying Life Fibers, an alien species in the form of sentient thread. His research produced Ryuuko's sailor uniform Senketsu, as well as the one thing that can kill it: the Rending Scissors. Because they are made from ultra-hardened Life Fibers, the Rending Scissors are one of a very few weapons that can cut through Life Fiber-based clothing, such as the Goku Uniforms of Honnouji Academy. Though they can separate into two Scissor Blades—one red, one purple—the Rending Scissors are most powerful in one piece.

Six months before the beginning of the series, a mysterious stranger breaks into Isshin's laboratory and mortally wounds him with his own invention. With the last of his strength, Isshin breaks the Scissors and permanently scars his enemy, who flees with the purple blade. Ryuuko finds her dying father immediately after the battle, taking up the red Scissor Blade and swearing vengeance. The orphaned warrior carries the Scissor Blade everywhere she goes, keeping it in a guitar case El Mariachi style. 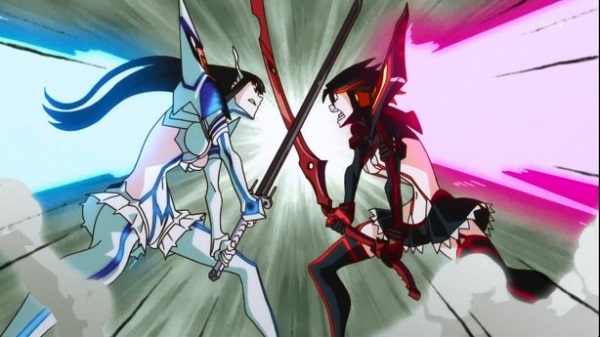 The Scissor Blade is specially made to sever Life Fibers. Like a lightsaber in Star Wars that instantly cauterizes a wound, it keeps Life Fibers from regenerating. As such, it gives Ryuuko a powerful finishing move, Sen-i-Soshitsu, which can destroy an enemy's Life Fibers in a single strike. The Blade is also capable of transforming; it can unfold into a longer "Decapitation Mode" to finish off stronger opponents, or collapse into a miniature form for easier storage. Though it's just over three feet long, the Scissor Blade packs a serious punch: throughout the series it is seen cutting through buildings at several miles' distance, withstanding supersonic impacts, and surviving a fall from high Earth orbit. Its powers are increased exponentially when it is reunited with its other half. 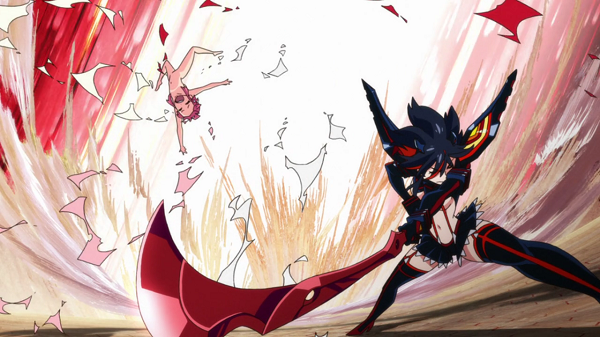 The Scissor Blade pulls double duty as Ryuuko's signature weapon and the strongest symbol of her father's memory. It's also a thematically perfect tool in a world threatened by superpowered clothing, sharing space with sewing machine pistols and throwing needles. As Kill la Kill's Japanese title is Kiru ra Kiru, and kiru can mean "cut", "kill", or "wear", you're effectively watching a show called "Dressed to Kill." In a world where clothing is power, what better way to defeat your opponent than by cutting up her outfit?