Each pair of anime twins in this list are truly two of a kind! 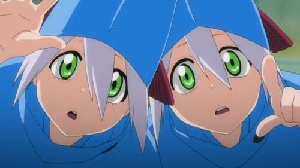 Twins in Japan are quite shockingly rare. One pair of twins are born every 160 births from Japanese women. Their appearance in anime though are a little more frequent, because anime twins make for some fascinating character dynamics. The connection they share is strong to the point of being nearly psychic (or so the thinking goes, although I'm sure many twins reading this are bamboozled by such thinking). Their identical appearance can create all sorts of jokes or plot twists. Anime twins are also pretty hot - who doesn't want a duplicate of a handsome man or pretty girl? Finally, character designers love them because you get two characters with one drawing! Here are some of the most notable anime twins in the industry.

Here are 20 of the most popular anime twins in existence!

Ryou and Kyou Fujibayashi from Clannad 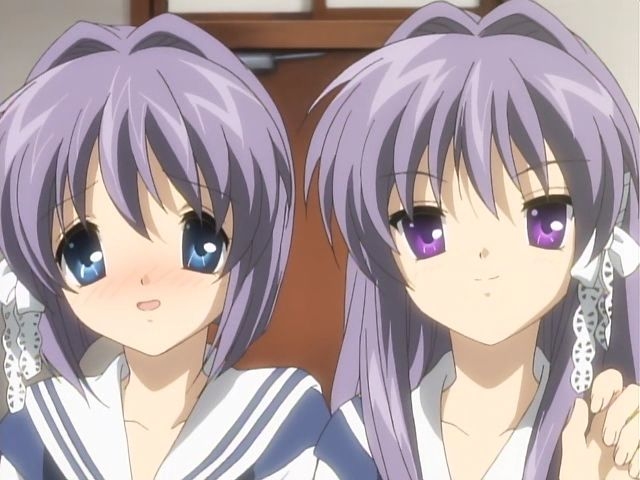 Ryou and Kyou Fujibayashi are the purple haired anime twins in Kyoto Animation and Key's cry-a-thon Clannad and its sequel Clannad: After Story. Although they're twins, the pair of them are quite different. Ryou is the timid version, while Kyou is the louder, more aggressive version of the two. Also, since Clannad technically qualifies as a harem anime with multiple routes, they both have a crush on the main character.

Nana Astar and Momo Belia Deviluke from To LOVE-Ru Darkness Nana and Momo (along with their big sister Lala) are the pretty pink Princesses of Deviluke, making them two of the cutest anime twins and anime aliens in existence. But don't be fooled by their bright smiles. These mischievous anime twins have come to Earth to escape their studies and have some fun... and fun they shall have!

Yukio and Rin Okumura from Ao no Excorcist

When you imagine the children of Satan, you probably picture creatures straight out of some old horror movie. But animation paints a quite different picture than Hollywood. The Okumura brothers are two half-human, half-demon brothers who were raised by a powerful exorcist. After his passing, they decide to fight the fight that he had began. These handsome anime twins show us just how hot flames can be!

Tsukasa and Kagami Hiiragi from Lucky☆Star 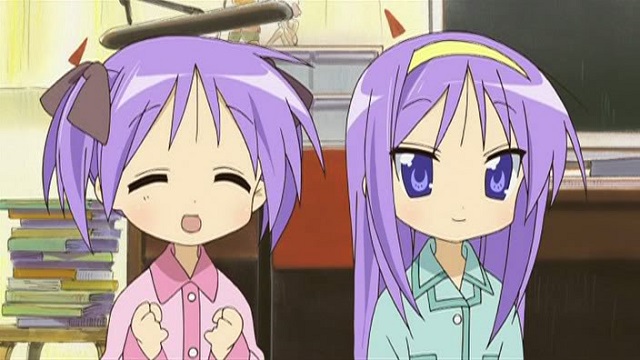 You know how they say twins are like two peas in a pod... yeah, not these girls. Kagami and Tsukasa are fraternal twins with completely different hobbies. While Kagami is what we would call an overachiever who loves reading light novels and studying for school, Tsukasa is less academically active, spending most of her free time watching anime, playing games, and napping. With two completely different characters, both with pretty much the same face, it's impossible not to fall in love with at least one of them!

Kazuya and Tatsuya Uesugi from Touch Kazuya and Tatsuya not only share the same good looks and love for baseball, but also the same romantic feelings for the girl next door. However, what seems to be the beginning of a messy soap opera gradually transforms into a beautiful portrayal of the bond between these two young boys as they face life's challenges head on!

Sora and Haruka Kasugano from Yosuga no Sora: In Solitude, Where We Are Least Alone. After the loss of their parents, Sora and Haruka were awakened to the reality of their deepest desires. In times of tragedy, you can't help but long for comfort from someone close to you. But in the case of these innocent anime twins, how close is too close? These two twins have just what it takes to make it big in the world of anime: Kotone being a loose cannon on the verge of becoming a yandere and Akari having the tsundere archetype down pat. To save the life of their little sister, these anime twins must find a way to work together to overcome fate itself. With a little help from some cute penguins, of course. Maiku has had a difficult life, to say the least. He has no recollection of who or where his family are, and the only hint to finding them is a picture of a young boy and girl playing in front of a blue house. This clue leads Maiku to that very blue house, where he soon meets two beautiful girls, one his twin and one an impostor. Love and confusion are in the air, and none of them are immune to it. In this mysterious game of Where's My Twin? one thing is for certain: this is not your typical love triangle. Zero and Ichiru have a long history. Before the chaotic family fights, there was an era where the two truly cared for each other. We can only hope that those innocent smiles last forever.

Yuuko and Hideyoshi Kinoshita from Baka to Test to Shoukanjuu Who knew that the iconic Hideyoshi had an identical twin sister? I could only imagine how awkward it could be to have a brother just as feminine as you, if not more so. But on the bright side, Yuuko, every otaku fan that drools over Hideyoshi is most likely also drooling over you. 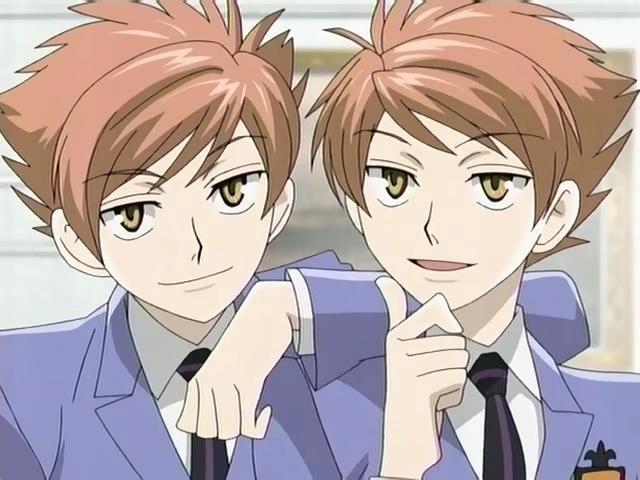 Doesn't matter if you're a lady or a dude, everything is better when there are two versions of this pretty guy. This is especially true since these anime twins like to play up a homoerotic, incestuous vibe between themselves in Ouran High School Host Club. You would think parents of these identical anime twins would give them significantly different names, but instead they got lazy and just stuck 'hi' on the front of Kaoru's name to christen their other twin son.

Kururi and Mairu Orihara from Durarara 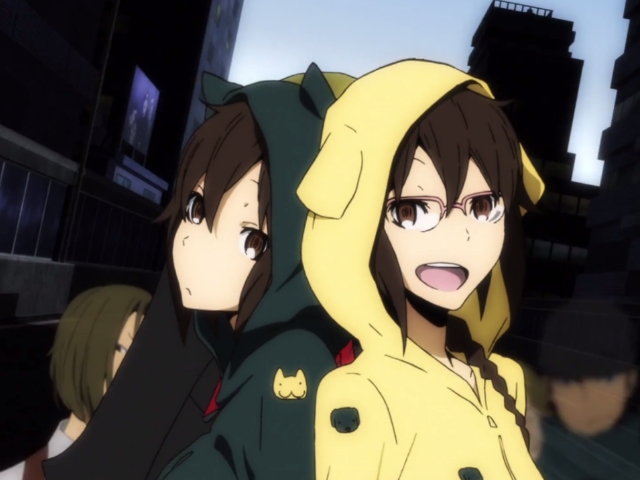 Speaking of anime twins that like to play up their vaguely incestuous homosexual vibes, how about the Orihara sisters from Durarara. Although they didn't really show up until the sequel, Izaya's younger sisters stole the spotlight in each scene they were in with their wild and slightly scary antics. Unless you think pouring thumb tacks into someone's mouth is cute and lovable behaviour.

Chii and Freya from Chobits 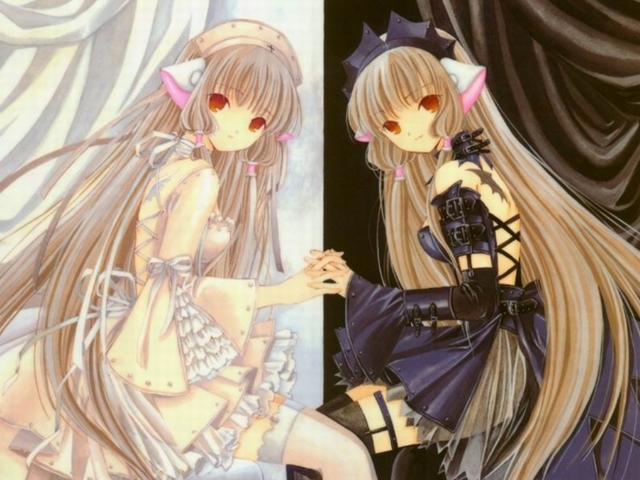 Twins are not always just born. Or at least in anime they aren't. In the anime Chobits, the pair of androids Elda, who later became Chii, and Freya are created as twin sisters and surrogate daughters for their creators. They share the old twin psychic connection, although at least this time it is perhaps more explainable as maybe they are just sending each other messages via the WhatsApp installed on their operating systems. 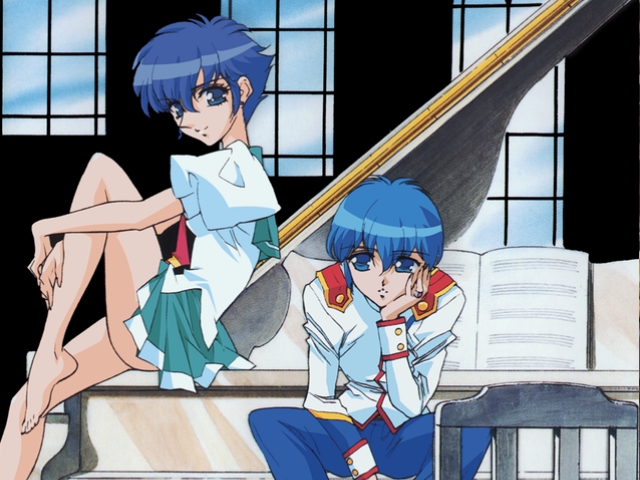 Playing up that incest is just anime being anime, but on rare occasions a director decides to go further with that concept and really explore the deep emotional complexities and fraught relationships such feelings could create. Step forward Kunihiko Ikuhara with his masterpiece Revolutionary Girl Utena. Kozue and Miki aren't the main focus of the show, but their struggles are a constant background hum in this fascinating tale. 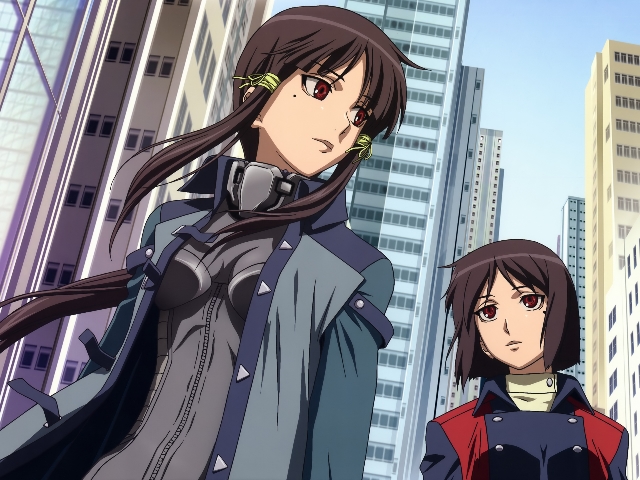 I didn't quite realise just how common creepy relationships between anime twins were until I started making this list. The Chinese assassin twins from Full Metal Panic: The Second Raid are yet another example. Yu Lan Xia and Yu Fan Xia are set on revenge against the cruel upbringing and can only rely on each other for comfort.

Hansel and Gretel from Black Lagoon: The Second Barrage 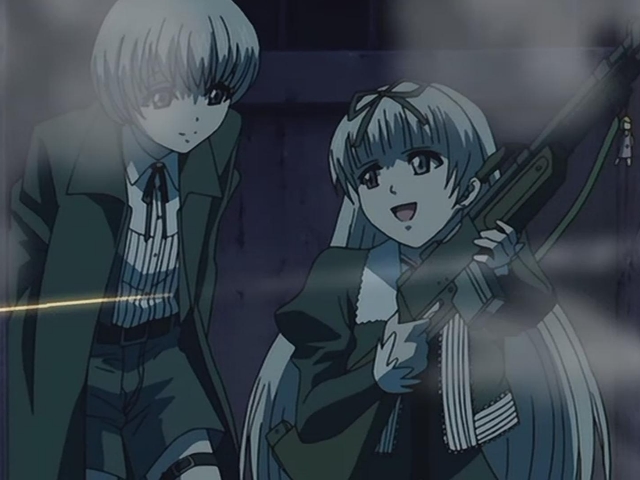 However, the title of king of scary anime twins belongs to Hansel and Gretel from Black Lagoon. I shall refrain from spoiling their story, but it's the kind of tale that makes you recoil in horror from your screen as you can feel your skin crawl and bile start to rise in your throat.

Shion and Mion Sonozaki from Higurashi no Naku Koro ni 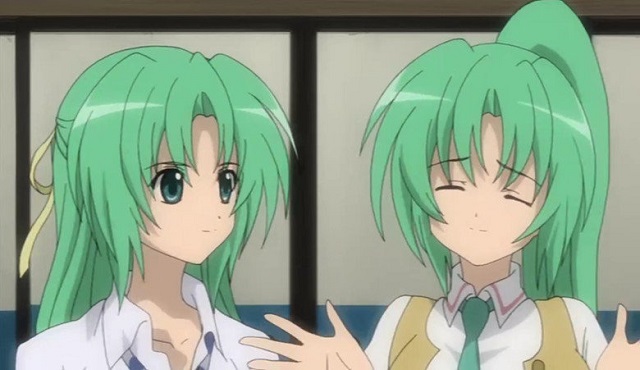 We're starting to see something of a pattern here. Horror anime really love their twins, and the complicated family relationship between Mion and Shion in the brutal anime Higurashi is another addition to this ever growing list. Perhaps it has something to do with a deeper cultural belief that twins are considered bad luck and in the past it was not uncommon to kill one of the twins at birth before neighbours found out. No really, Japan's history with twins is rather brutal indeed.

Johan and Anna Liebert from Monster 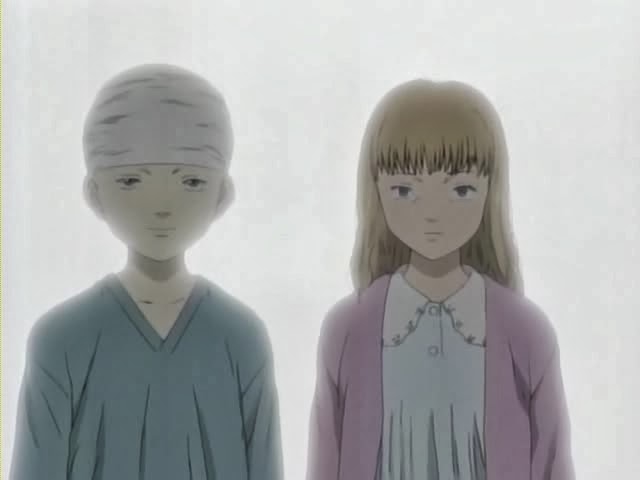 Oh no, more horror anime? I thought this was going to be a happy list with lots of pretty anime twins, not this unrelenting wall of twisted stories. The German twins from Monster share a dark and frightening history and their pursuit of each other speaks to unfulfilled desires and attempting to right perceived wrongs, but to say any more would be spoiling one of the most critically acclaimed anime around. Can we have something more happy now? Some twins from a rubbish harem anime or something like that?

Basically the entire cast of Futakoi 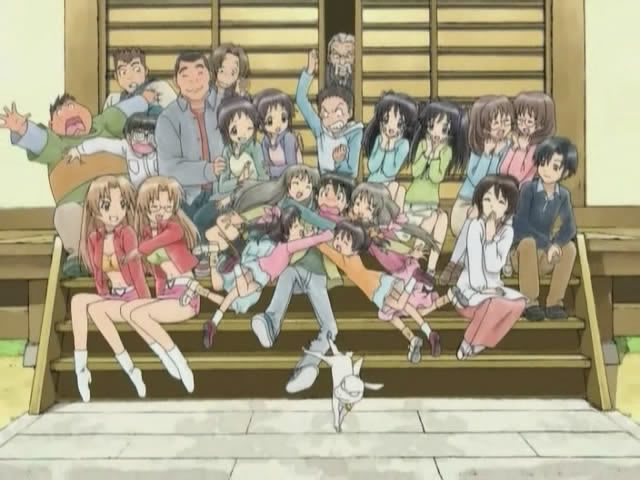 The ultimate anime twins... or twins anime! Literally translated to "Twin Love", Futakoi is about a generic male lead returning to his home town who is suddenly surrounded by twin girls on all sides. There are at least 6 pairs of twins packed into these 13 episodes alone. If you love twins, then this is the anime to watch!

Twins are adorable, but anime twins have much more to offer!

What started as a delightful look into the fun twin characters in anime turned really dark surprisingly quickly. It turns out that perhaps Japanese folklore in regards to twins has had a stronger lasting impact on story writers in Japan than we originally thought. For every fluffy harem and reverse harem featuring some cute twins, there's a frightening horror anime waiting just around the corner. If you ever are in the mood to be spooked though, please be sure to check out the Top 15 Horror Anime and Top 7 Scary Girls in Anime articles for some more frightening fun!