When you say the word 'anime' to someone who's not particularly well versed in the medium, their response will probably be one of two things: Either “Oh my god, Naruto is the best show ever!”, or “high school”. It's an incredibly common theme that even a casual anime watcher will have noticed. But high school by itself is a little boring. I'm sure we all have some fond memories from our time in high school, but was there enough freak occurrences and calamity to make an interesting story? Probably not. That's why anime creators – as well as mangaka, light novel authors, etc. – need to add a little something to it. Thus, we commonly get a high school romance, with a few other themes thrown in. Sometimes the romance is the main focus, like in Clannad. Sometimes it's only a small part of the anime, i.e., Isuca. And sometimes, the romance is only implied, and is left up to us to take it where we want with our imagination, as you will see in Charlotte. 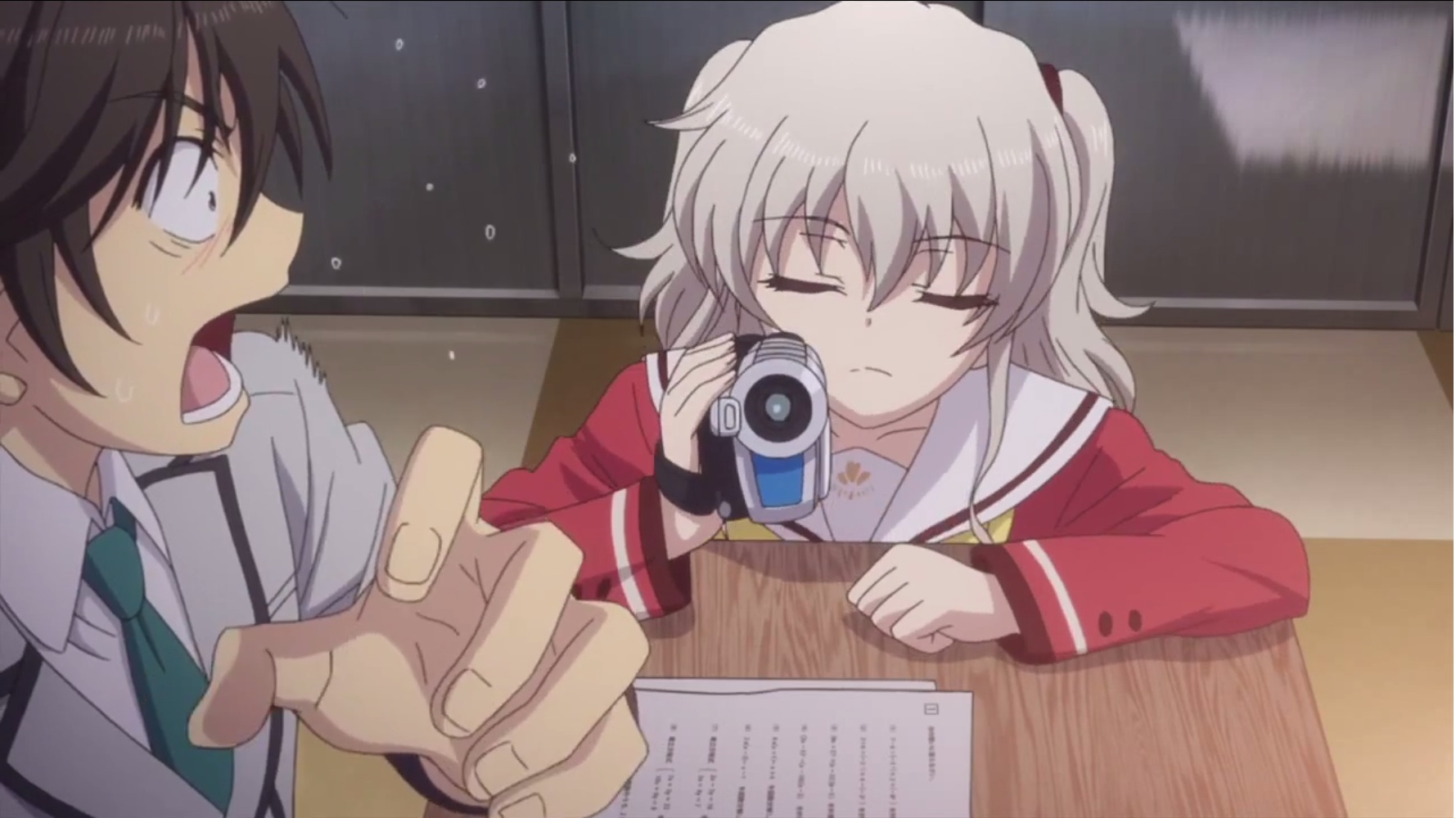 Charlotte is a recent anime scripted by Jun Maeda, who also wrote Angel Beats! and was in charge of the musical direction for other Key/Visual Arts productions, such as Clannad and Kanon. Not to be confused with the unrelated 1977 anime of the same name, the 2015 anime is about several characters struggling not only with the trials of high school, but also the fear of being hunted for their gifts. As high school alone is not exciting enough, many characters from the world of Charlotte develop some form of superpower around the time they reach puberty. However, such things are not meant to last. Their powers will suddenly disappear within a few years. But really, who wouldn't want to be able to travel through time, or move faster than the speed of sound? 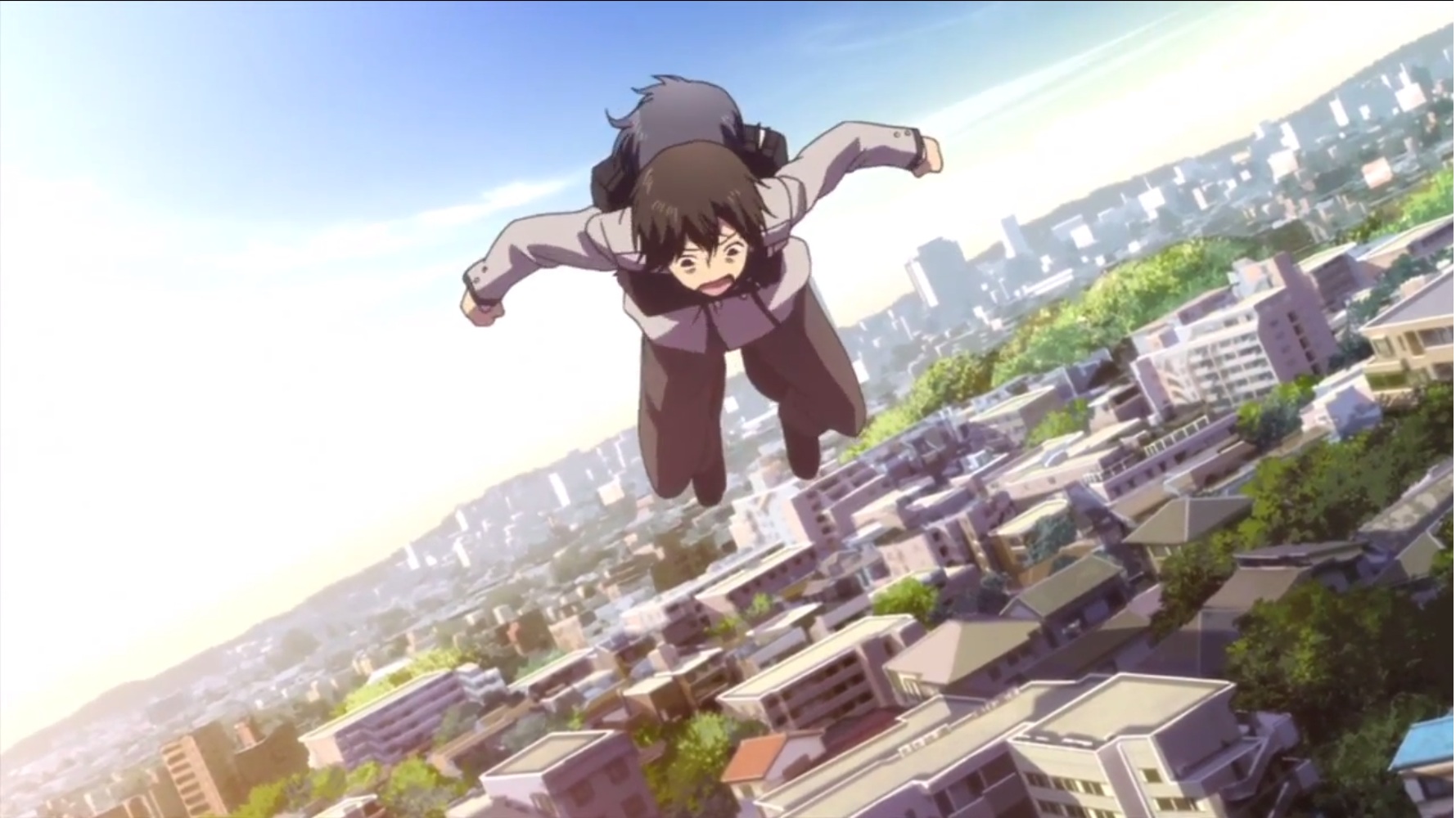 The main protagonist of Charlotte is Yuu Otosaka, who has the ability to invade anyone's mind for five seconds. Later, he can also permanently steal the power of other ability wielders, making him a little overpowered. He is a little antisocial at first, and doesn't really have any friends, but many of his classmates see him as something of an idol. Aside from that, he's more or less just your typical high school student. He cheats on tests, has no interest in the student council, and he's mostly just there to get through school so he can move on with his life.

His partner in crime, so to speak, is the student council president and a fellow ability wielder, Nao Tomori. Her ability? Invisibility. Kind of. She can completely erase her presence from one person at a time. Everyone else can see her perfectly. It might seem like a kind of useless ability, but it... well... yeah, I guess it is pretty useless. But it's especially handy around episode seven, when we are blessed with a phenomenal amount of character development for both her and Yuu.

Nao is also the most interesting character in this gem. She's very smart and level-headed, but her methods of getting things done can be a little extreme. At times, she seems like she's a tsundere, but that's not quite accurate. She lacks the wild, personality flip-flopping of a typical tsundere character. This is a nice change of pace, as we actually get to see some romantic development, instead of just the obvious infatuation of a tsundere. She holds her friends and family in high regard, and although she can sometimes be a little terse with them, she's only trying to help.

There are many other characters in this anime with a plethora of abilities, but since this article is about the high school romance aspect of the show, I'm going to stick to just Yuu and Nao since they are the only characters with any romantic element between them. 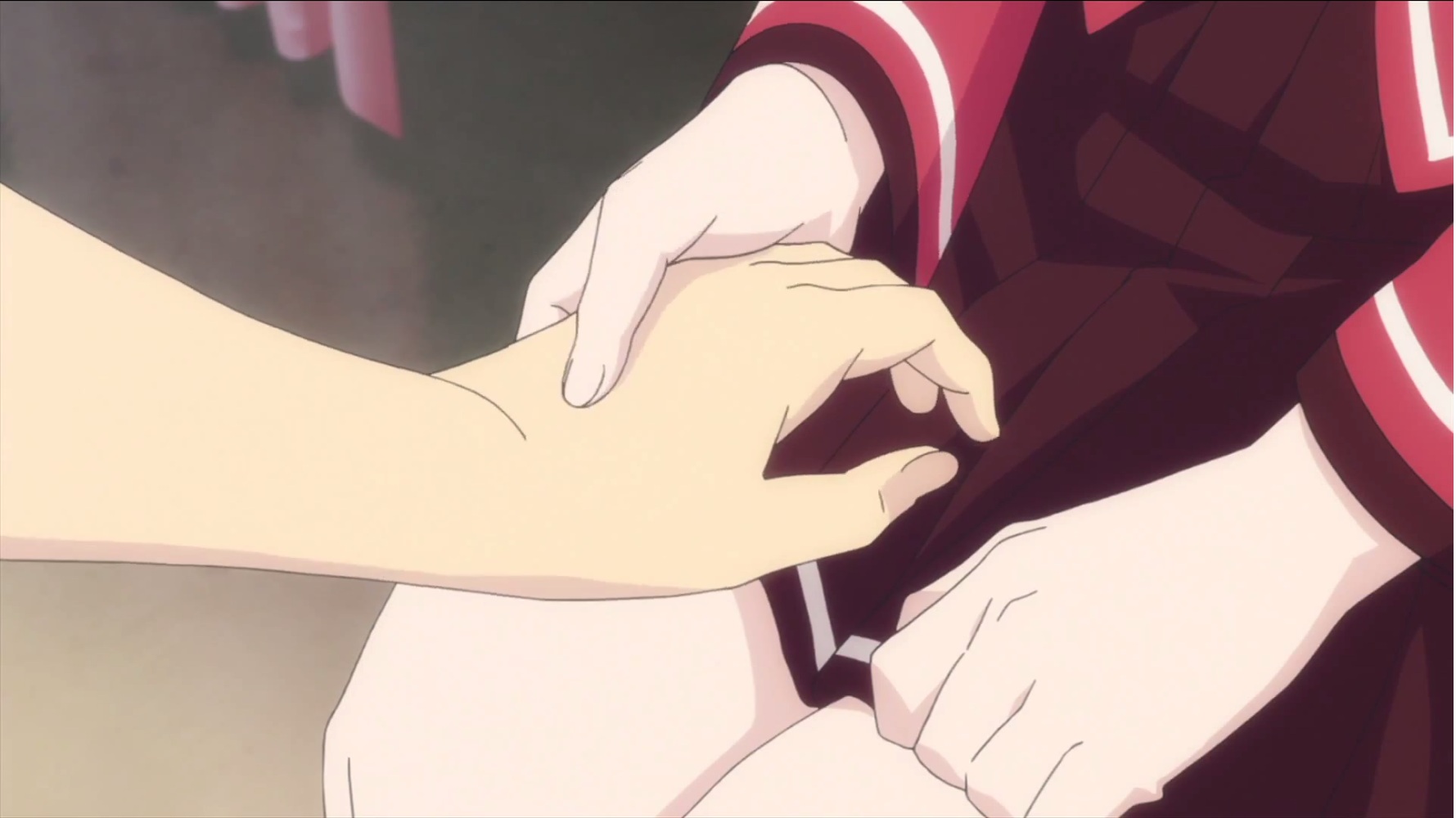 The romance in Charlotte is pretty hidden for most of its 13 episodes. There are several instances where we start to believe that there has to be something more between two characters – particularly Yuu and Nao – but we don't get any conclusive evidence until the last few episodes. There's almost no connection between them at first. Nao recruits Yuu to join the student council, which is composed entirely of people with abilities. At least they call themselves the student council, but really, all they do is find other people with certain powers and convince them to keep a low profile. There are certain organizations that are looking for these people to experiment on them. Not to mention the damage some of them could do if they fall in with the wrong crowd.

Normally, Nao would only tell Yuu to stop using his ability, but his ability would make it very easy to avoid conflict with any of the other super-powered people. As they work together, they begin to share more and more of themselves with each other. Nao gets closer to Yuu's younger sister, Ayumi, and Yuu gets introduced to Nao's older brother, Kazuki. Thanks to Nao, Yuu gradually starts to open up, and become more personable. 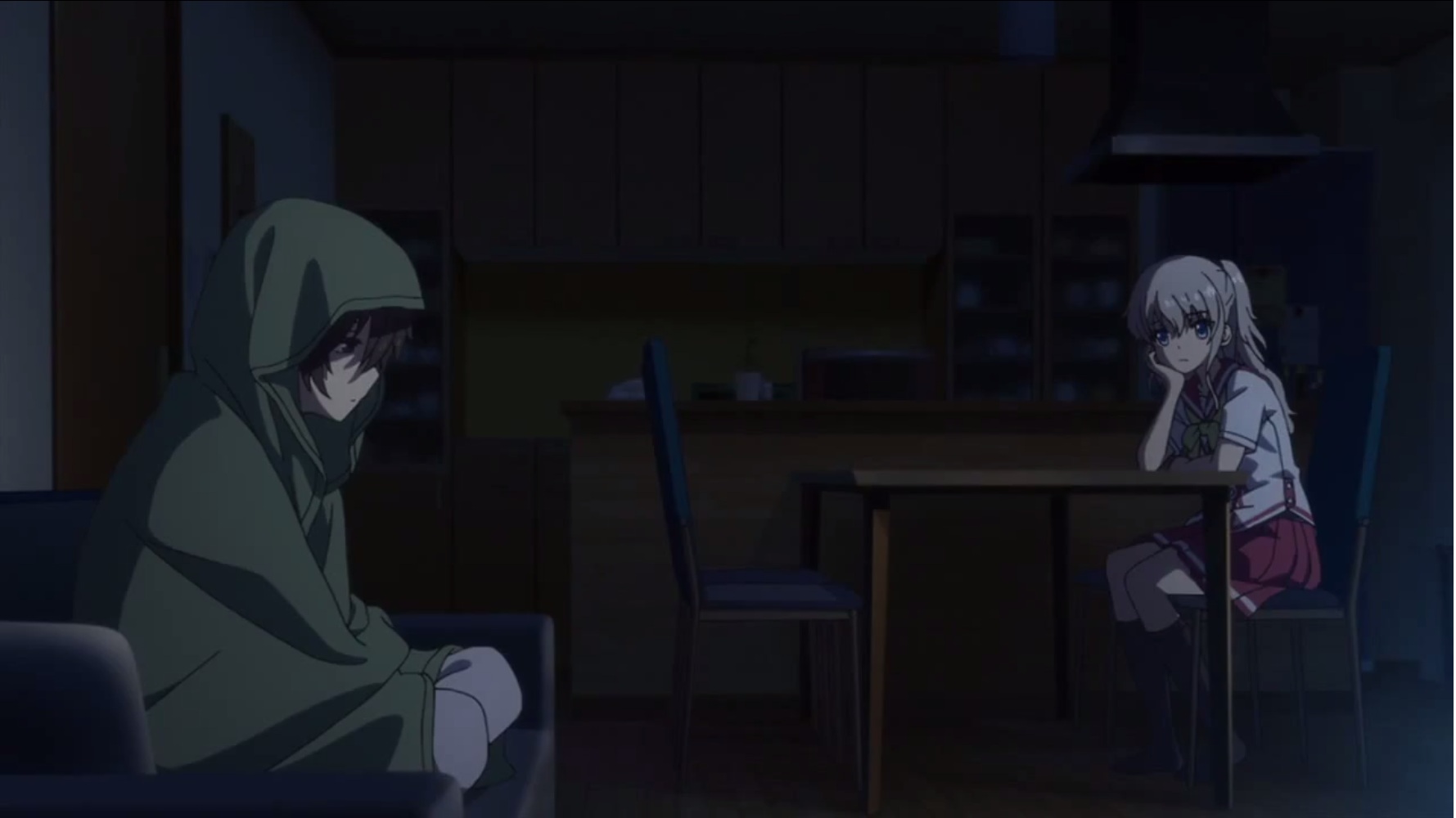 However, the actual romance between them is still nonexistent for quite a while. They're close friends, but nothing more. Until Yuu falls into a deep depression, starts fighting, and turns to drugs. Nao is the only one there for him, although he can't see her. She secretly watches over him, and wants to bring him back to his senses. She goes to extreme lengths to save her friend.

Things continue relatively normally after that, until Yuu remembers his erased past and his ability to confiscate other abilities. Now it's his turn to repay Nao kindness. He begins pillaging the abilities of every other ability user in the world. But not before he confesses to Nao. She in turn makes a little booklet full of English sayings for him, which becomes the only thing to tie him to his old life. After stealing tens of thousands of abilities, his memories have faded. So much so that he has absolutely no recollection of Nao at all. But her feelings for him will not change.

The romantic aspect of Charlotte is truly quite brilliant. It's not overbearing or obvious, nor is it too insignificant and inconsistent. It has just the right amount of development to make it very touching. What makes it so interesting is how believable it is. Not the whole superpowers thing, but the progression of their friendship and their relationship. It's more lifelike than you will find in most anime. What started out as nothing more than simple character introductions blossoms into a real romance story without the use of any tricks like the cliched tsundere character or internal monologues.