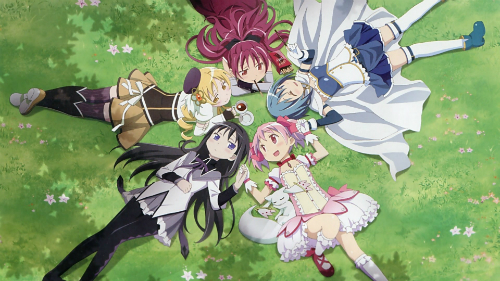 Is Mahou Shoujo Madoka☆Magika something a little more than friendship? Fans of this show are still arguing back and forth on the answer to that question. While there are theories that the show is nothing more than platonic loyalty to friends, there are also lots of hints that prove it leans more towards yuri. Whether it's between Homura Akemi and Madoka Kaname, or Sayaka Miki and Kyouko Sakura, there are undertones of a more romantic relationship budding beyond the canonical friendship. 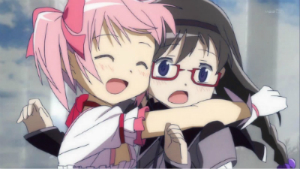 The theorized romance between Homura Akemi and Madoka Kaname is something that the series is very well known for. In fact, there are tons and tons of fans that argue that their friendship was meant to be romantic. Of course, it didn't start that way. When the anime series commenced, the audience was introduced to Homura as the new girl. She was mysterious, and almost portrayed as the rival magical girl. However, as the series continued, there was an obvious connection to Homura and Madoka that everyone had missed.

Further into the series, viewers learn that Homura is able to manipulate time. They also learn that she and Madoka had started out as very close friends. It was because of the strength Madoka gave her that Homura was able to make friends and learn how to be herself. Her one wish was even focal pointed around Madoka: she wished to be able to save Madoka from the magical girl lifestyle. This wish had caused Homura to spiral out of control, watching her very best friend die without even being able to change her fate. Every single time, Homura would get so close to saving Madoka, only to see a repeat of what had happened in previous time lines－or worse. It's that sacrifice that leads the fans to believe that there is something more between them that isn't written into the script of the show.

However, the script of the show also hints towards yuri dialogue. For example, in episode 10, Homura says this to Madoka:
"I'll repeat it. I'll continue to repeat it over and over. Visiting the same time again and again, searching for the single exit out. Searching for the path to save you from a fate of despair. If it's...if it's for you, I have no problem being trapped eternally in this maze."

Connections to other Yuri anime

While there are more than enough scenes and dialogue that give enough evidence on their own, there are also a few scenes that look a bit similar to scenes from other well beloved yuri anime. The two yuri anime that the show gives homage to are Kannazuki No Miko and Revolutionary Girl Utena

In the final scenes of the anime, prior to Madoka: Rebellion, Madoka and Homura share what the viewers believe to be a final embrace. Madoka gives Homura her red hair ribbons, which can also be inferred as the red string of fate to some fans. This embrace, which has become infamous with fans of Mahou Shoujo Madoka☆Magika, resembles a still from a very well known yuri anime, Kannazuki No Miko.

If this comparison feels a bit far-fetched, it's also notable that Homura Akemi resembles Chikane Himemiya by a landslide. Both of them are dark haired, have some kind of comparison to night time, and wield a bow and arrow. Both are also stuck on the idea of a forbidden love, or at least a love that is very difficult to obtain. In the picture below, Chikane is holding Himeko's uniform tightly to her chest, just as Homura is doing to Madoka's red hair ribbons. 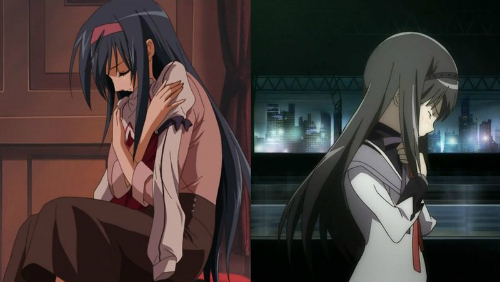 Revolutionary Girl Utena is a very popular yuri anime that debuted in the 90s, and it is still widely loved today. In the opening sequence to Madoka: Rebellion, there are a few stills of Homura and Madoka that greatly resemble that of a dance in the Revolutionary Girl Utena movie. The only thing that seems to be different is the lack of roses, but even without them, it's easy to say that this is a striking resemblance. 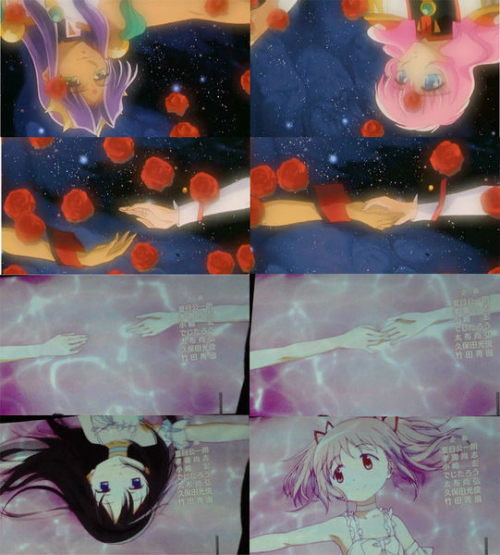 The final comparison is also to Revolutionary Girl Utena, but it is not between Homura Akemi and Madoka Kaname. It is a touching scene held between Madoka's friends, Sayaka Miki and Kyouko Sakura, two fellow magical girl. Prior to this scene, Sayaka and Kyouko had only just become friends. Whenever Sayaka began to fall apart from depression, it was Kyouko who stood by her side more than anyone else. In fact, Kyouko was so loyal to Sayaka, that she allowed herself to be killed in the process of putting Sayaka's witch form to rest. This is also following the pattern of a forbidden romance, much like the one between Homura and Madoka.

Of course, all of this is speculation and theory. Fans are going to believe whatever they want to believe, but there are obvious signs towards a deeper, more romantic side of the series. The show is crammed full of forbidden romances and lifelong sacrifices that only lovers would make for one another. Or perhaps sacrifices that only friends would make to see each other happy. There is no wrong answer to this question!