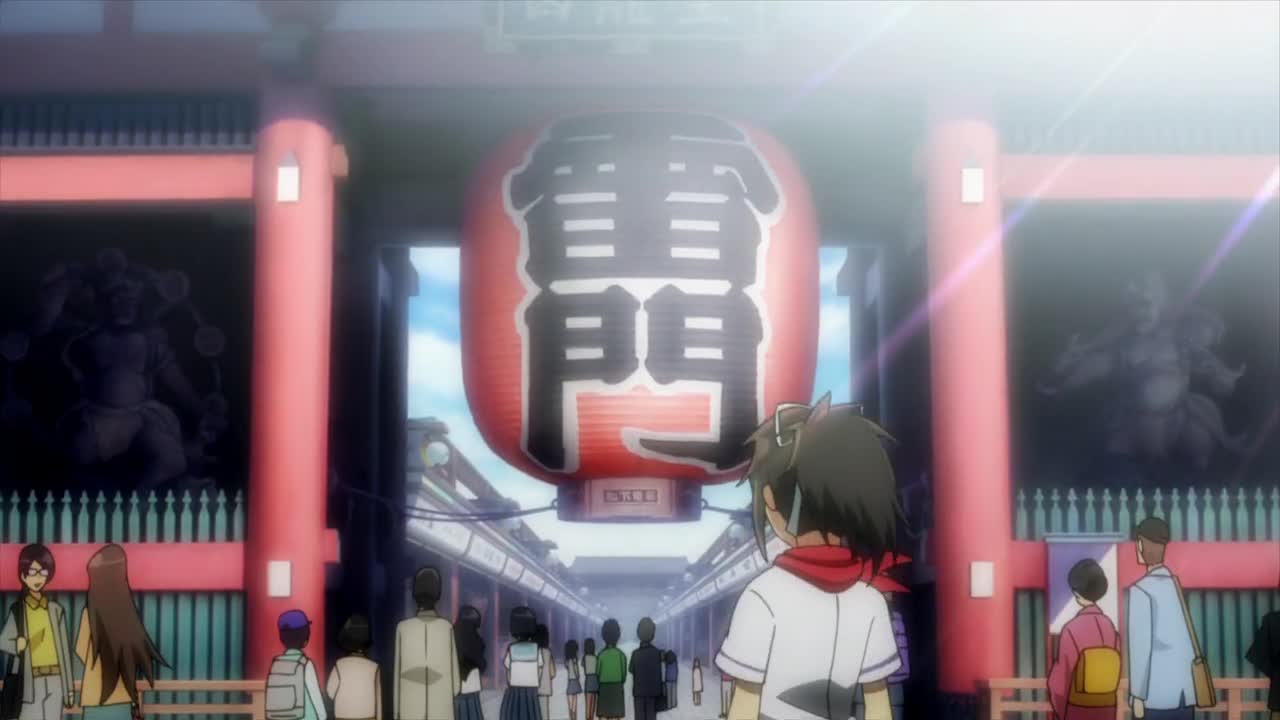 Hanzo Academy is just like any other school in Japan, except for the select group of students who train dutifully to become "good ninja". Of course, where there is light, there is darkness. At the heart of the darkness in Senran Kagura’s world is Hebijo Academy. A merciless training ground dedicated to nothing but creating the most ruthless ninja. These two factions will be pitted against one another as an evil entity makes a power grab.

While Senran Kagura takes places in modern Japan, it still incorporates historical aspects that mesh well with the shinobi storyline. Below is some insight into the history that inspired parts of the anime. 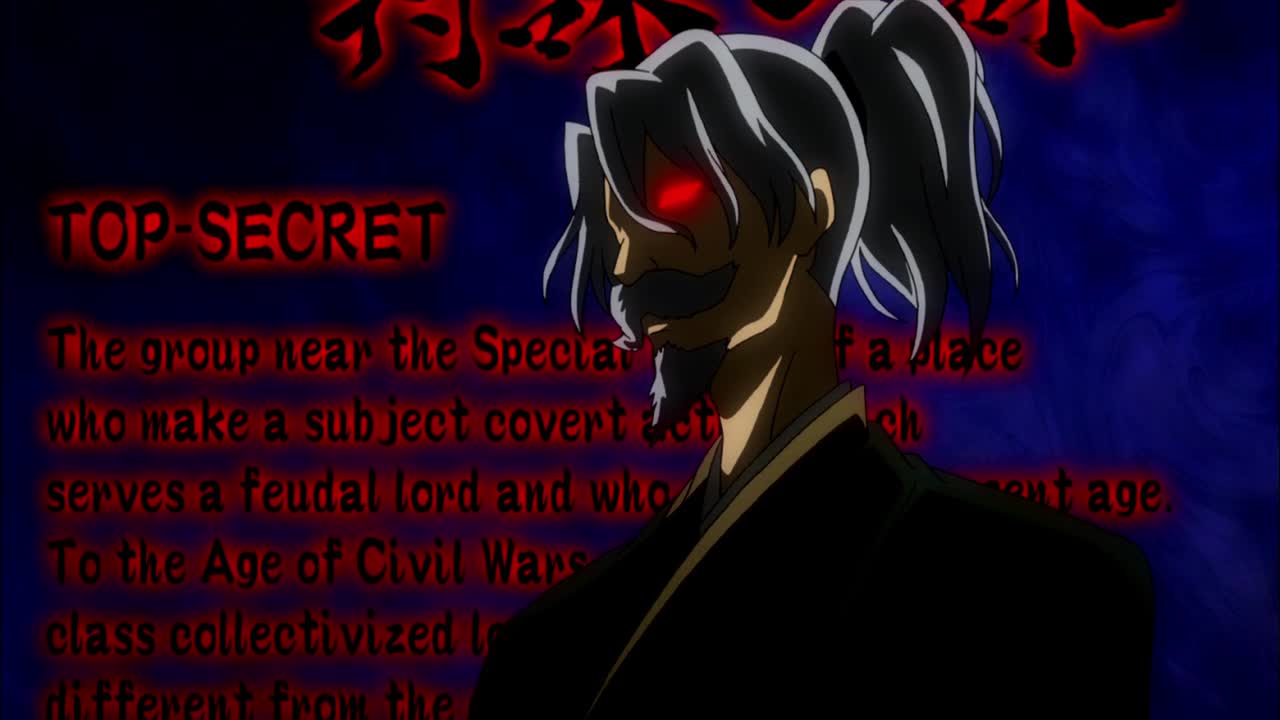 Master Hanzo is a legendary shinobi in Senran Kagura’s world with an academy named after him. Anybody involved in the shinobi trade knows of him.
There’s no doubt that he was modeled after the legendary samurai and ninja Hattori Hanzo of the Sengoku era, who lived from 1542 – 1596. 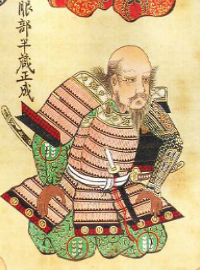 Hattori Hanzo began filling his resume at the tender age of 16 when he participated in an attack on Udo Castle. He would follow this up by fighting in the siege of Kaminogo Castle and Kakegawa Castle, and serving in the battles of Anegawa and Mikatagahara. He was able to distinguish himself in all of these battles, although he is most well-known for leading Tokugawa Ieyasu to safety through treacherous lands after the death of Oda Nobunaga. Tokugawa Ieyasu would go on to become Shogun.
The heroics he displayed during Tokugawa Ieyasu's escape cemented his legacy. Hattori Hanzo would go on to be featured in a myriad of films, television shows, books, manga and of course anime. There are also physical remnants of this larger than life figure. He has a gate named for him that still remains to this day within the Tokyo Imperial Palace, Hanzomon (Hanzo's Gate). He also has an entire subway line that bears his name, the Hanzomon subway line that runs from Hanzomon station located in central Tokyo that goes towards the western suburbs and ends where his home was once located.

Supernatural abilities have been ascribed to Hattori Hanzo, including being able to predict the future and control the physical world with his mind (psychokinesis). These types of abilities are also attached to all of the shinobi within the world of Senran Kagura. 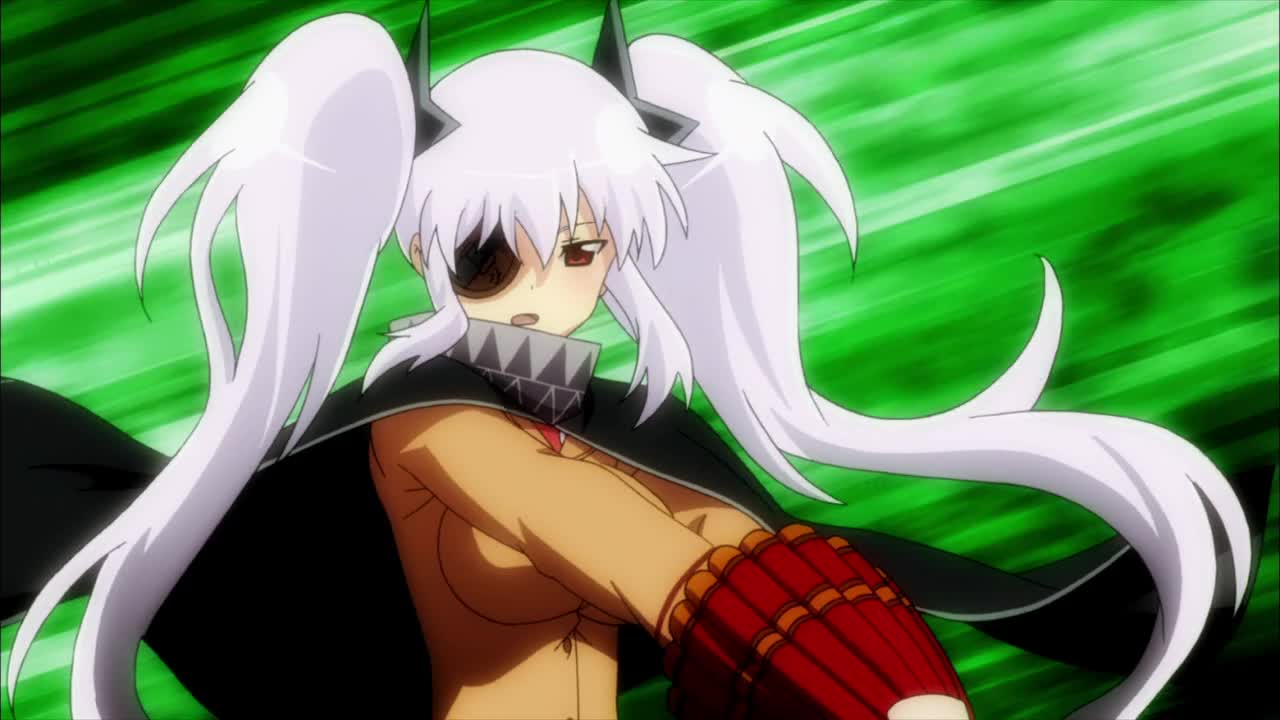 Yagyu is an incredibly gifted shinobi at Hanzo Academy despite her young age. The inspiration for this character most likely comes from Yagyu Munetoshi, another samurai from the Sengoku era, who lived from 1529 – 1606.

Yagyu Munetoshi enjoyed studying the military arts from a young age. This love of battle and tactics would serve him well when he entered battle for the first time, at 15 years old, when his clan's castle came under attack. He was even given his own troops to command in this battle. Despite his side's loss, he acquitted himself well.

About two decades later, he would face off with Kamiizumi Nobutsuna, where he was soundly defeated. Afterwards he would invite Nobutsuna to his home where the two trained dutifully for about a year. During this period of training, Yagyu would perfect the concept Muto-dori, fending off an armed opponent while unarmed. This innovation impressed Nobutsuna so much that he would award Yagyu with an inka-jo, meaning he had reached the pinnacle of Shinkage-ryu and could now teach it. Yagyu would later write that he did not know victory until he met Nobutsuna.

Yagyu Munetoshi’s fame would come from mastering Shinkage-ryu, and inheriting the school after Nobutsuna’s death. The school’s name then changed to Yagyu Shinkage-ryu, and is one of the most storied and respected schools of swordsmanship in Japan. 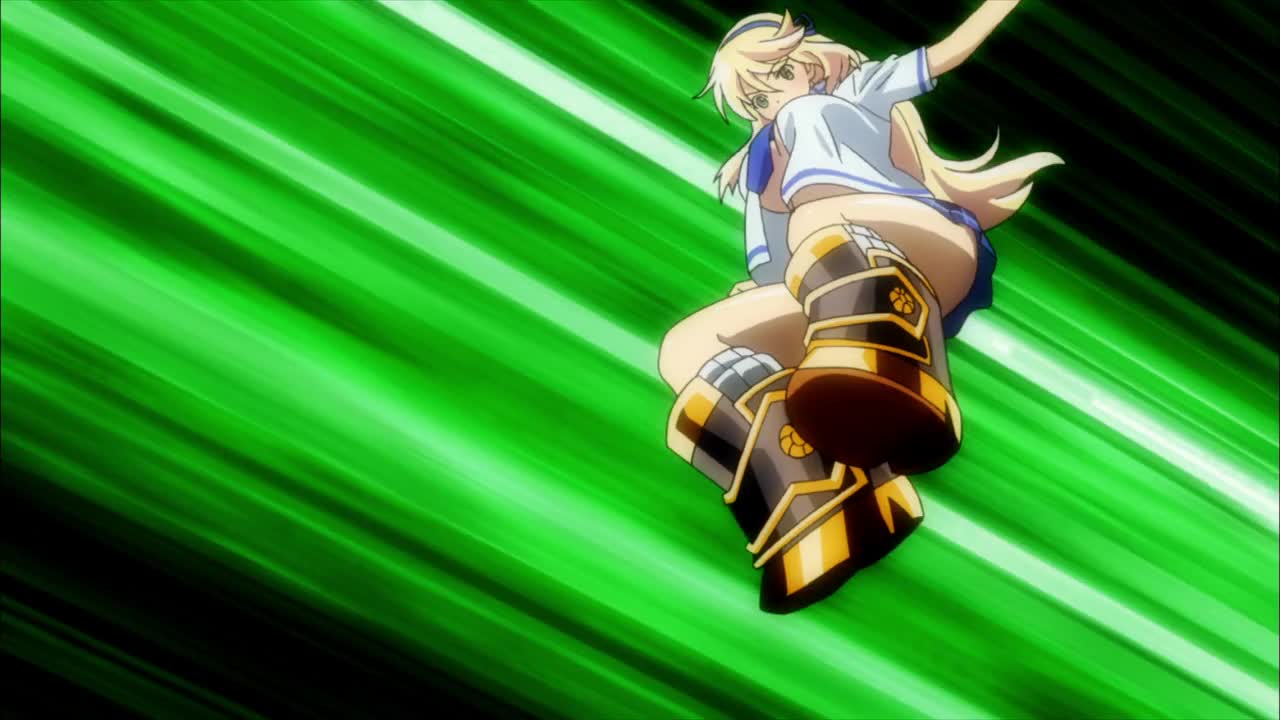 Katsuragi is a brawler through and through, preferring to use her fists and feet to dish out damage. With her transformation to her ultimate shinobi form, she acquires a pair of iron greaves, which are a type of armor that protect the wearer’s lower legs.

Japanese greaves, or suneate, became common garb for samurai during the Kamakura period, which took place from 1186 – 1333. Its design would continue to evolve throughout the years with the most common type of suneate being a metal splint attached to fabric with chain mail placed in between the splint and the fabric. This kind of suneate would be used throughout the Momoyama period, which ended in 1602. 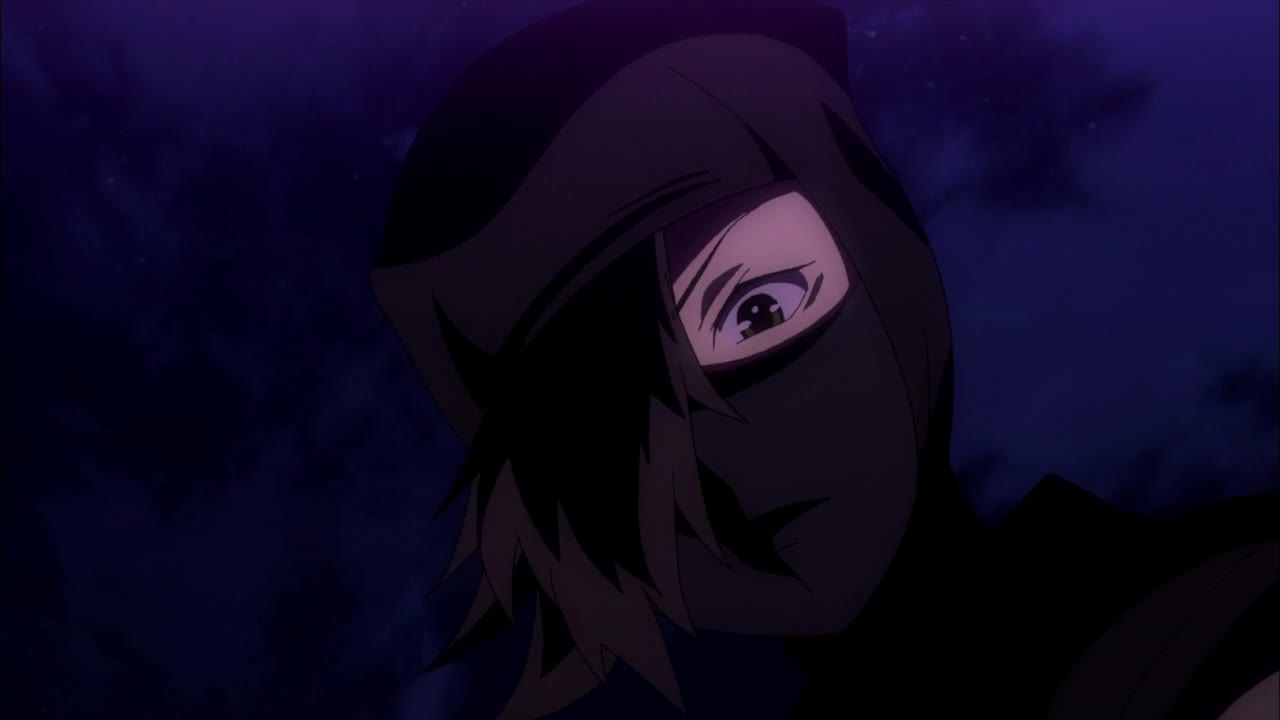 Senran Kagura is all about the girls’ quests to become the best shinobi that they can possibly be. So this article would be incomplete without delving into the secretive world of these martial artists.

Shinobi would perform a range of tasks including assassination, spying, infiltration and sabotage. The height of shinobi power came during the Sengoku era, which was a chaotic time for Japan. This chaos meant that the specific skills the shinobi possessed would be in demand. 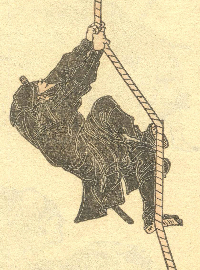 Those who would train in and master these secretive arts were usually of lower classes. This is because samurai would never “lower” themselves to performing such disgraceful acts as espionage or terrorism; with rituals, decorum and openly challenging opponents being the unspoken rules of that era. But at the end of the day, someone had to do the dirty work in order to facilitate a victory, and the shinobi filled that role perfectly. A role that would later make them infamous figures in Japanese history.


Shinobi, just like samurai, would begin training as children because the profession would be passed down within the family. Their training was designed to make them proficient in scouting, gathering of information, explosives, survival skills, poisons and martial arts. Student's physical attributes would be honed with long distance runs, swimming and climbing. In order to disguise themselves, they would learn basic facts about the most common types of jobs found at the time, enabling them to blend in amongst the populace.

The Iga and Koga clans were infamous for the ability and skill of their shinobi. These clans were living in a remote area of Japan, surrounded by mountains that made it almost inaccessible. This most likely allowed for the development of the shinobi to happen without interruption. All of the shinobi that emerged were absolute professionals, their superb skills sought out by feudal lords throughout Japan. 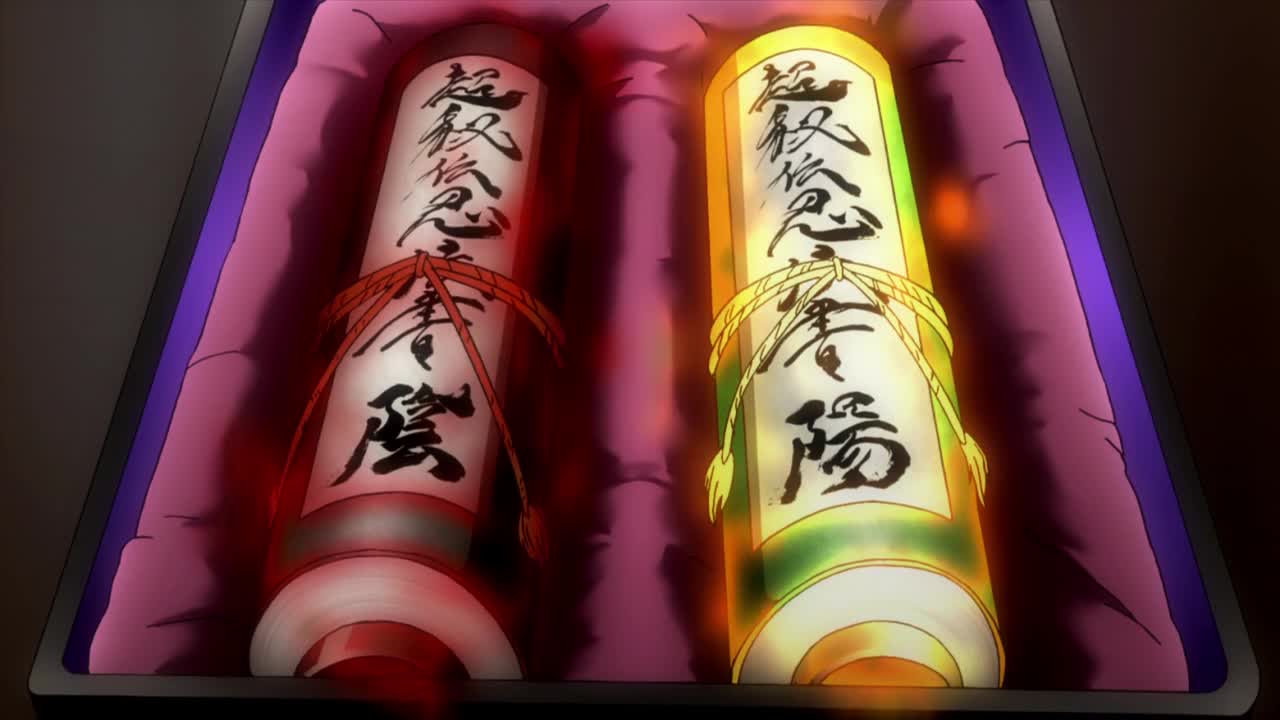 The concept of yin and yang is explored in Senran Kagura with Hanzo Academy and Hebijo Academy. The show explains that the main reason Hebijo exists is to act as a counterbalance to Hanzo academy, with Hebijo acting as the yin while Hanzo occupies the role of yang.

Yin and Yang are an important part of Chinese philosophy. It is thought that opposing or contrary forces in nature are interconnected, independent, and complementary rather than being destructive to one another. Day and night, water and fire, and contraction and expansion are all examples of this duality in effect. Confucianism builds on this idea by attaching morals to the philosophy. 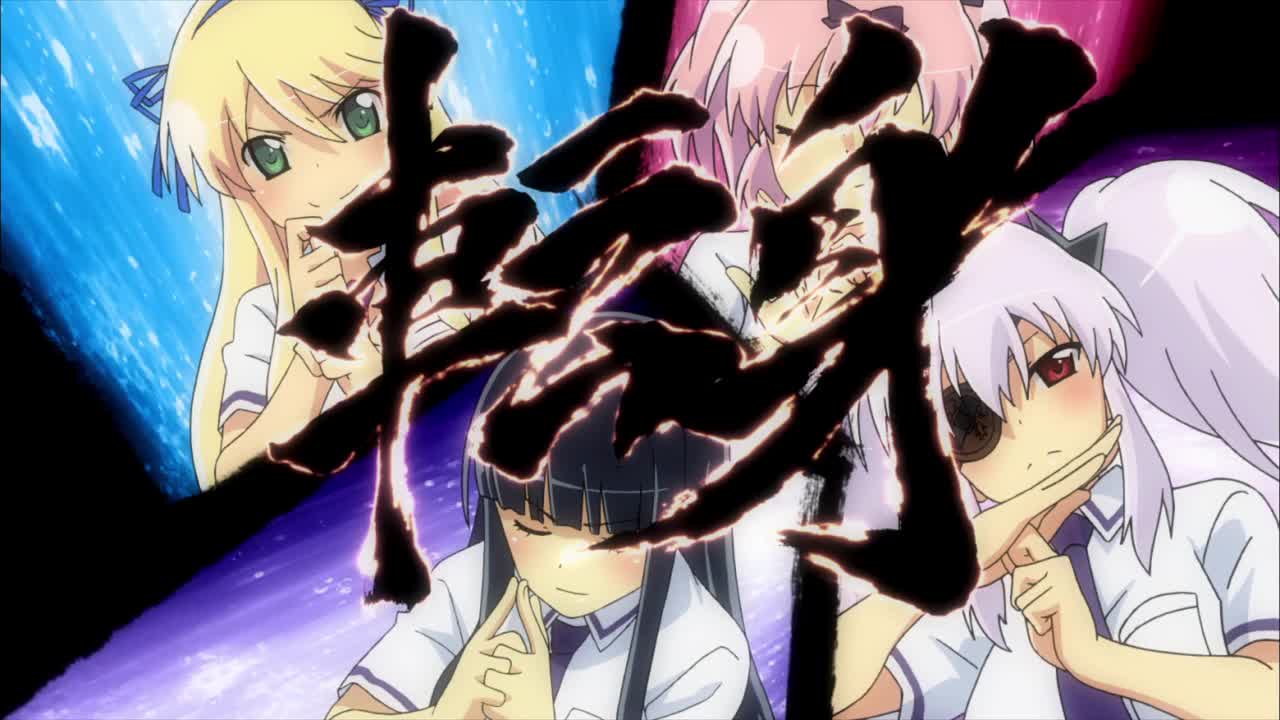 As part of their shinobi training, the girls are taught the secret technique of shinobi transformation. This technique requires them to tap into the dormant energy stored within all six of their chakras, or energy channels. The transformation instantaneously changes them into a uniform that matches their fighting style, allowing them to use their powers at the maximum level.

Chakras are an element of the Hindu religion based in India, and their hierarchy was introduced around the eighth century. It is thought that the human body contains energy that meets along several points through energy channels called “nadi.” The nadi allows the life force or vital energy to move throughout the body. According to different texts and teachings, there are several chakras located within a person, but seven of them are considered to be the most important. A key difference to note is that the anime states that the girls must tap into six chakras in order to transform into their most powerful selves.

The seven main chakras are:

So you're done with Senran Kagura and you'd like to watch more attractive girls who happen to be skilled fighters? Then this is your lucky day because the following anime have that in spades! 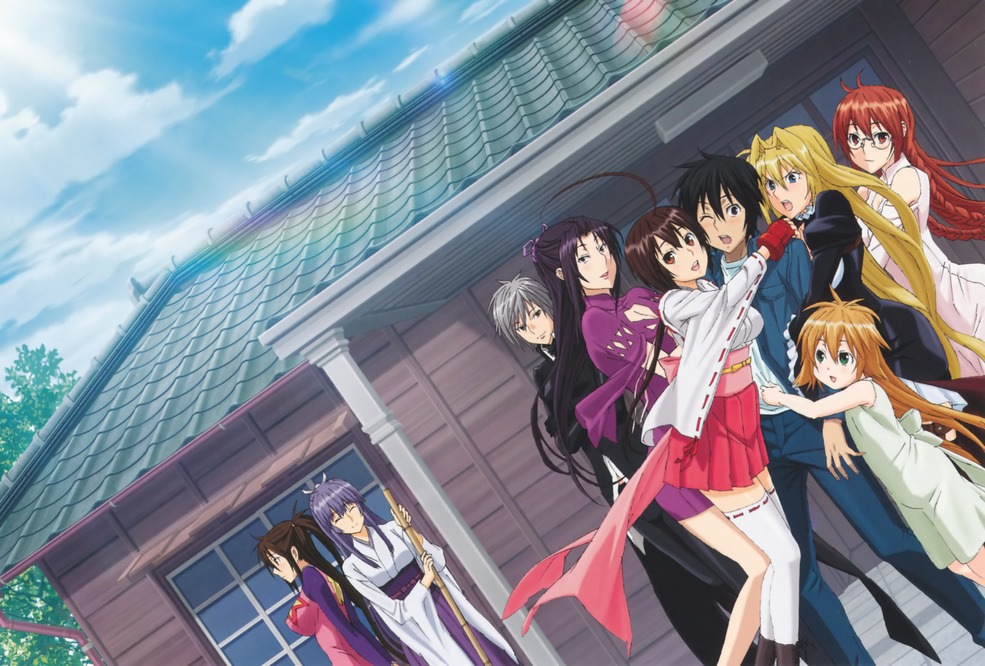 The story revolves around Minato Sahashi. He's incredibly intelligent, but tends to crack under pressure. This leads to him failing his college entrance exams. Following this failure, he meets Musubi, a young woman that is a Sekirei, who happens to fall on him. This chance encounter will lead to Minato becoming Musubi's Ashikabi, a person who can unlock a Sekirei's full potential.

The power unlocked by the Ashikabi is used by Sekirei when fighting other Sekirei in battle. These battles are usually because the Sekirei are matched up against one another in a tournament known as the S-Plan (Sekirei Plan), which is run by the powerful corporation MBI (Mid Bio Informatics).

The Sekirei are tough fighters similar to the shinobi in Senran Kagura. The main difference being that the Sekirei's abilities are on a more powerful scale. During fights clothing will begin to fall apart as the contestants deal more and more damage, so there are plenty of opportunities to see all of the jiggly goodness on your screen. This disappearing act is a trademark of Senran Kagura. You'll feel right at home. 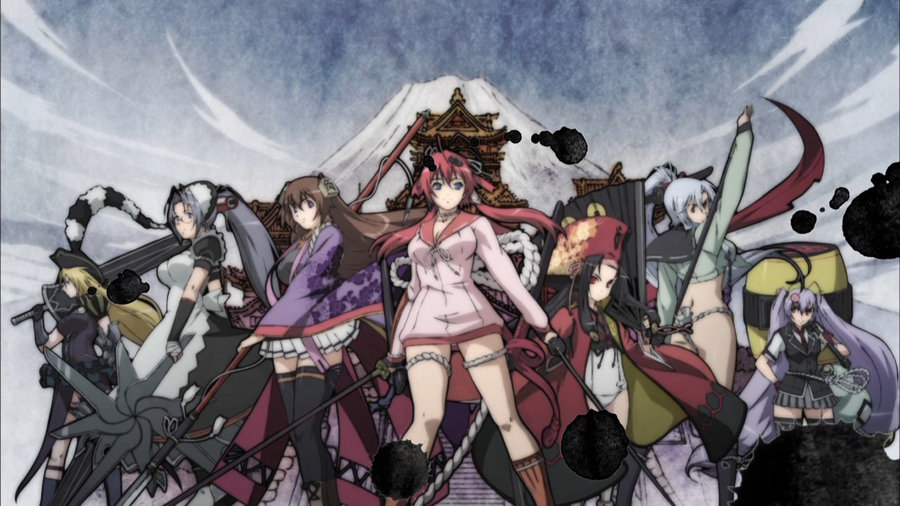 Hyakka Ryouran: Samurai Girls definitely takes a more historical angle. While the story takes place in modern times, it exists in a timeline where the Tokugawa Shogunate never relinquishes power in Japan. Jubei Yagyu, Sen Tokugawa, Hanzo Hattori, Gisen Yagyu... No, these aren't a bunch of old dudes with weird facial hair you've seen in history text books. These are some of the characters of Hyakka Ryouran: Samurai Girls and they are all very pleasing to the eyes, and can match the girls of Senran Kagura when it comes to their physical assets. Instead of training to become shinobi, they will be training to become samurai.

While the story is interesting and the characters are all hotties, the part that will really get a viewer's attention is the art style. It looks like an old school ink painting come to life. The art all has very bold line work to it, which makes it stand out from other shows. The art really has to be seen in action to be fully appreciated. It's a show that would please any discerning visual arts fan.

Saint Seiya: Soul of Gold -- A Paradise for Pagans!

Saint Seiya: Soul of Gold is the newest installment of the long-running franchise. The series develops the references to Norse Mythology that were only hinted at in the original series.