Warning: This post contains minor spoilers about character developments in Nanatsu no Taizai, some of which happen fairly late into the anime. Read at your own risk!

Merlin. King Arthur. Britannia. No, that’s not a word association game with Arthurian legends - those are some of the names that pop up in Nanatsu no Taizai. You might have recognized these names while watching, but dismissed them as insignificant nods to the great legend of Britain’s King Arthur.

If you look closer, though, you’ll find that Merlin and King Arthur are not the only references to the legends. All seven sins are connected to Arthurian legends. Some merely borrow the name while others stick fairly close to their origin stories.

So what, exactly, do Meliodas and his band of odd companions have to do with King Arthur and the Knights of the Round Table? Well… 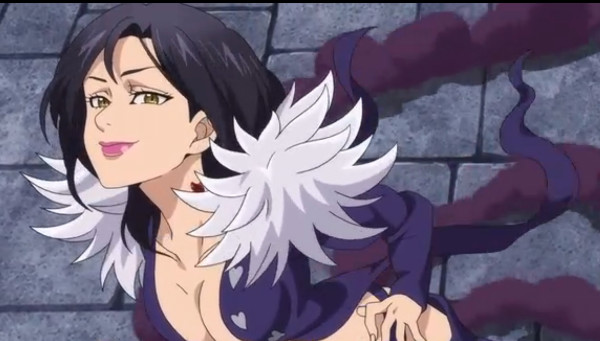 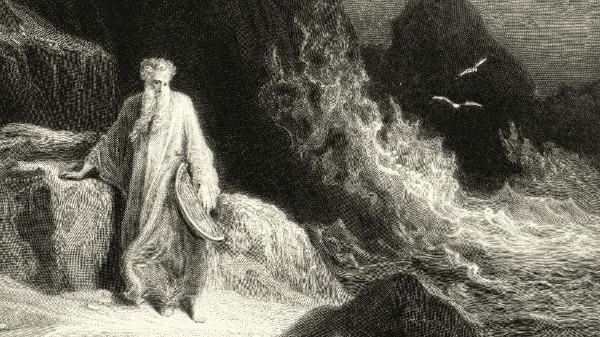 Engraving from the 19th century. Just a slight difference between the two images…

This is probably the most recognizable name among the Sins in the anime. Merlin is a powerful female magic user and a faithful companion to King Arthur.

In Arthurian legends, Merlin was… a powerful male magic user and a faithful companion to King Arthur. Moving right along...

Meliodas was the King of Liones 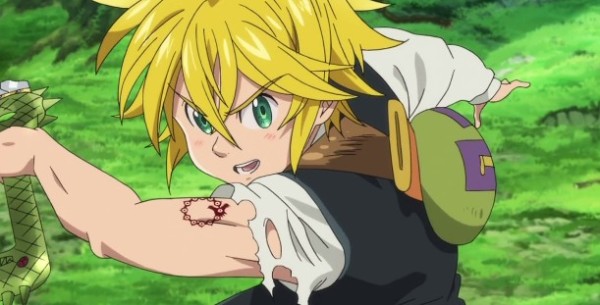 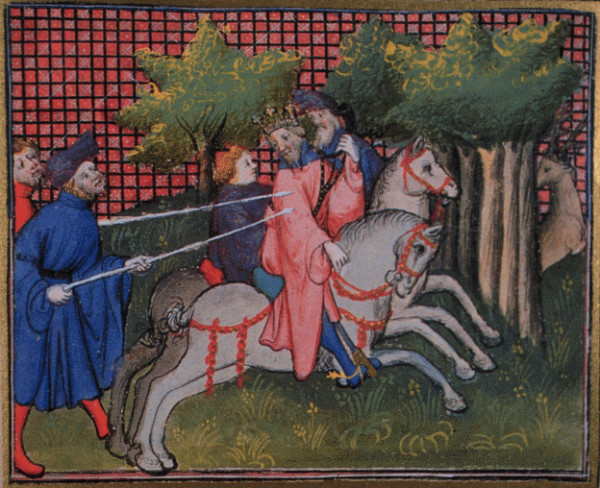 Meliodas is the undisputedly awesome leader of the Seven Sins, possessing an immense power that sometimes frightens even his closest friends. His Arthurian origin bearing the same name is not as physically strong, but he wielded a different kind of power - he was a king.

King Meliodas of Liones is not that well known on his own, but rather for his offspring: the legendary knight of the Round Table, Sir Tristan. Tristan gained fame for his forbidden and tragic love with the Irish princess Isolde, and overshadowed his father through sheer drama.

According to one retelling of the legend, King Meliodas goes on a couple of adventures of his own before he settles down to do his Kingly duties. He is magically abducted and imprisoned in a castle (sounds a bit more like another Nanatsu no Taizai character..). He is eventually freed by Merlin, but not before his wife gives birth and dies from the childbirth.

Who was his wife? None other than Elizabeth, of course. In the series, Elizabeth’s full is name is actually Elizabeth Liones, in case you need further proof that the two are destined to be together. Loving and losing a woman named Elizabeth also seems to be in Meliodas’ cards.

As an aside, Meliodas and Elizabeth are originally named Rivalen and Blancheflor. That just doesn’t flow off the tongue as easily…

Ban was the father of Sir Lancelot 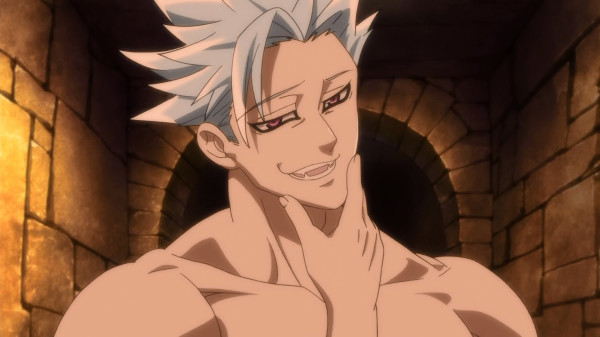 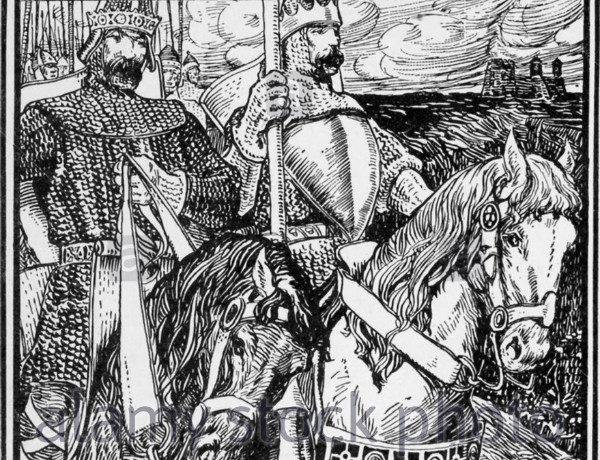 Engraving of the kings Bors and Ban, though it’s uncertain which is which.

In the anime, Ban says that his name is short for Bandit, and we assume we never actually learn his real name.

According to Arthurian legend, though, Ban is his full name. He and his brother Bors are kings, like Meliodas. And like Meliodas, Ban’s biggest claim to fame is his son: none other than Sir Lancelot, both King Arthur’s best knight, and worst traitor.

In the legends, Ban is married to Elaine (while his brother is married to her sister Evaine. That must make for some strange family reunions..). Elaine also happens to be one of the names that the Lady of the Lake (ruler of Avalon and powerful magician) is referred to as, so there’s a possible double-reference there.

That’s where the parallels between the anime and legend end, though. Unlike the fiercely loyal anime Ban, Arthurian Ban cheats on Elaine with another woman and fathers an illegitimate child. Meanwhile, anime Ban would never cheat on his precious Elaine, not even after her death.

Diane was a goddess 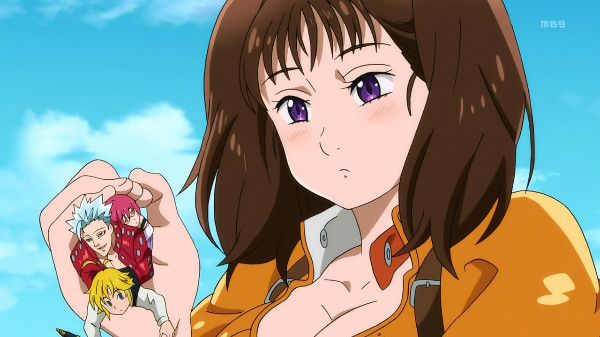 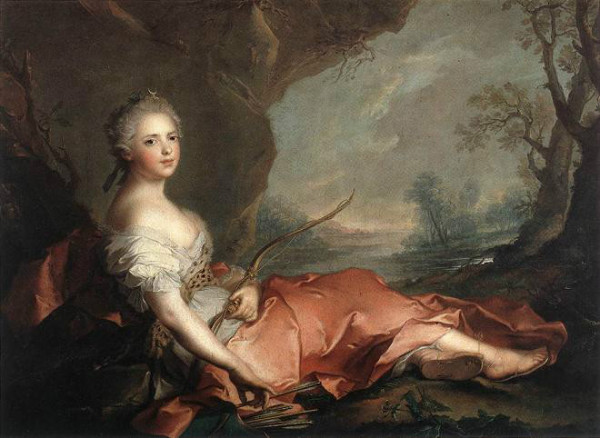 18th century painting of Diana, goddess of the hunt.

It’s not as certain which Arthurian woman Diane is supposed to represent, but considering her closeness to nature, she is probably a reference to the goddess Diana of the Wood.

Diana of the Wood has close ties to the Roman goddess of nature and the hunt, Diana. When the figure of King Arthur emerged, Britain was under Roman rule - so it's not unusual that some of the mythologies and legends got morphed together.

Oddly enough, Diane’s origin seems to describe Elaine’s story more than the giant’s. According to one myth, Diana had a sacred fountain which was guarded by a single person. Once in a while, a traveler would approach and challenge the guardian of the spring. The victor of the battle would become the spring’s new guardian.

Other than that, the goddess Diana was the protector of the woods, godmother of the Lady of the Lake’s father, and “particularly intimate” with a wood-sprite (although his name was not King). She was not, as far as I can tell, a giant.

King was tricked by a dwarf 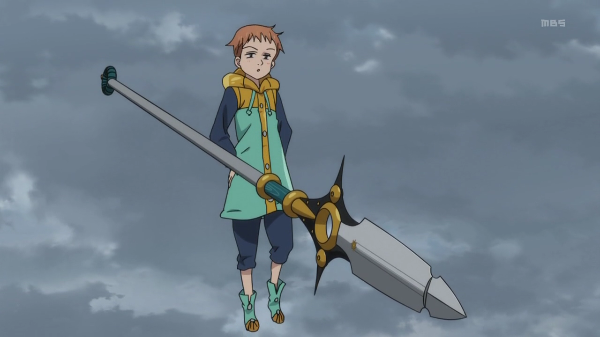 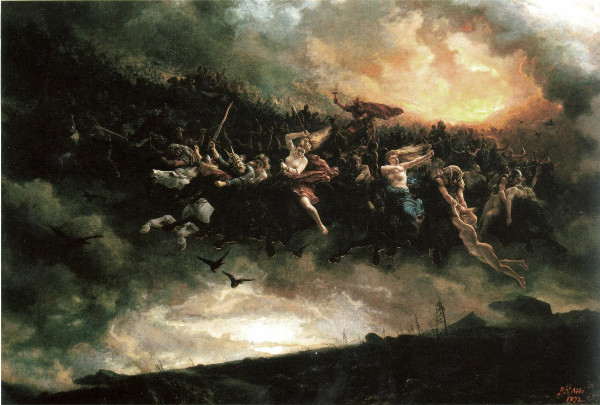 Painting from 1872 by Peter Nicolai Arbo depicting Odin and the Wild Hunt, who some believe is actually King Herla and his horsemen.

King is a pretty typical fairy. According to folklore, fairies used magic to disguise their appearance, and to fly (the cute wings came later).

You find the real story, though, through King’s full name. Harlequin is a French term for something of a cross between a clown and a mime. Dig even deeper, and you find King Herla.

In the story, King Herla is a human who is tricked by a dwarf. The two agree to attend each other’s weddings, and the dwarf makes a perfect guest. A year later, Herla travels to the dwarf’s home in the fairy land for his end of the bargain.

When he comes back, though, King Herla discovers that the people he left (Britons) have been replaced by strange people he didn’t recognize (Anglo-Saxons). Much like King in the anime, a feast that Herla thought only lasted three days actually kept him from his home for 200 years.

Having lost the one person he loves most, both in the anime and in the legend, Harlequin becomes an eternal wanderer. 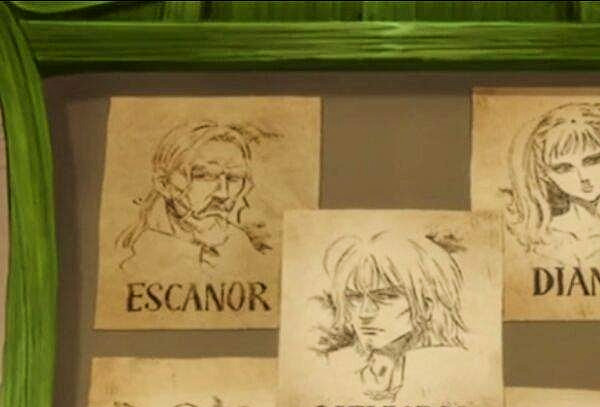 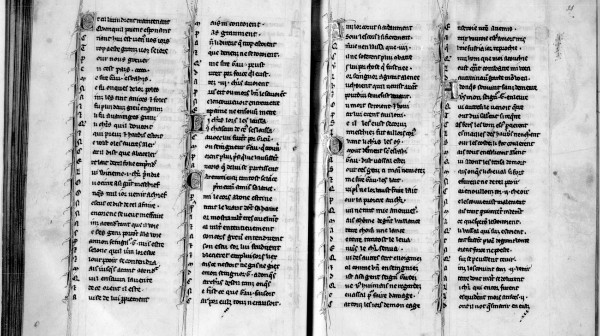 Arthurian Escanor is as elusive as the anime version.. I couldn’t find a single image of him. So here’s an image of the book he appears in, the 13th/14th century Romance de Escanor by Girart d’Amiens.

Escanor, the sin of pride, doesn’t even make an appearance in the first season of the anime. He’s not exempt from the Arthurian treatment though, and his origin is pretty firmly connected with the knight Gawaine.

The Escanor of legends has his own self-titled romance, as well as some serious beef with Sir Gawaine. The two fight twice, and both times are thanks to Escanor either being kind of a crook (he tried to abduct another knight), or just being wrong (he accuses Gawaine of killing Escanor’s cousin. Fact check: he didn’t).

All the fighting makes the two good friends and the story has a fairly happy ending.

Since we don’t know much about Escanor in the anime, there’s no telling yet what kind of character he’ll be. But fighting someone because you refuse to admit you were wrong sounds like something a sin of Pride would do.

Gowther was a terrible, terrible person 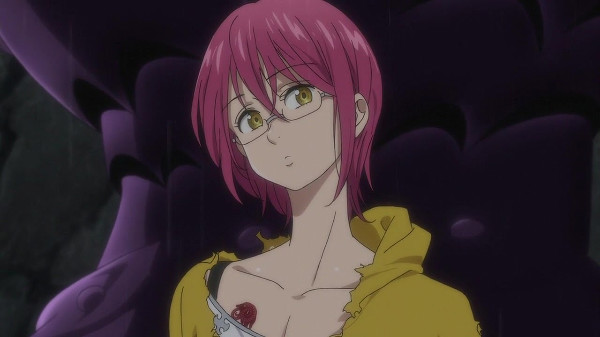 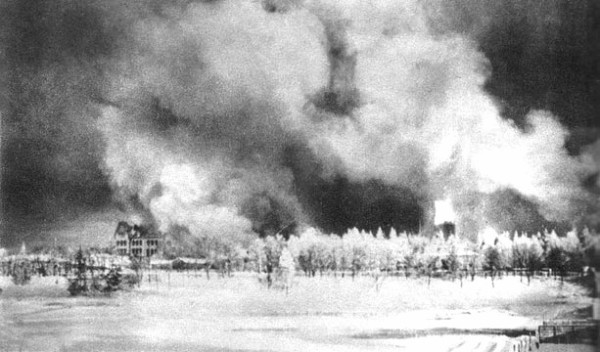 Unfortunately, I couldn’t find any images of Gowther either, so here’s a picture of a church on fire. It will become relevant as you read, I promise.

Ah Gowther. The story of Gowther’s Arthurian equivalent is so outlandishly terrible and unrelated to the anime Gowther, his name might as well have been picked from a hat. It’s so ridiculous, though, that it’s worth sharing:

In the legend, Gowther’s mother was tricked by a demonic fairy and became pregnant. This demon had a reputation for tricking women - his most notable conquest being Merlin's mother. And so Gowther, half-brother to Merlin, comes into the world.

Baby Gowther terrorizes everyone around him, somehow killing off several of his wet-nurses then biting off his mother’s nipple. Adolescent Gowther is no better, raping left and right, and even burning a convent of nuns to the ground. Nuns. The only way he could have been worse is by crashing a school bus full of orphans. His mother's husband literally dies of shame.

One day, Gowther finds out that his father was a fairy. And by “finds out” I mean he threatens his mother with a sword until she admits everything. Somehow, knowing his dad wasn’t human makes Gowther completely change, and immediately run to the Pope in Rome to ask for forgiveness for his sins.

The Pope agrees, but under two conditions: Gowther is forbidden from speaking, and anything he eats has to be chewed by a dog first, because apparently rape, arson, and murder can be forgiven through humiliation.

Gowther becomes an emperor’s fool. Soon, fighting breaks out and Gowther emerges as the best fighter thanks to a magical horse and suit of armor that make him invincible. Every night, the armor is a different color, and no one except the emperor’s mute daughter knows his identity.

On the final night of fighting, Gowther is wounded (so much for that invincibility). The emperor’s daughter is so worried that she leans too far out of her window and falls to her death. At her funeral, the mute daughter wakes up and tells everyone that she’s forgiven Gowther for his sins, and that they can both speak now.

They get married and Gowther builds a convent where the nuns can pray for the nuns he killed.

Bonus: Hawk may have been King Arthur’s nephew 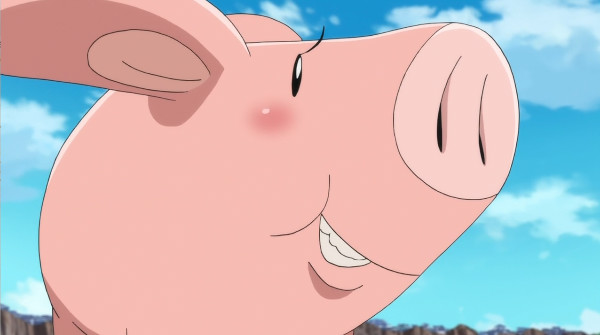 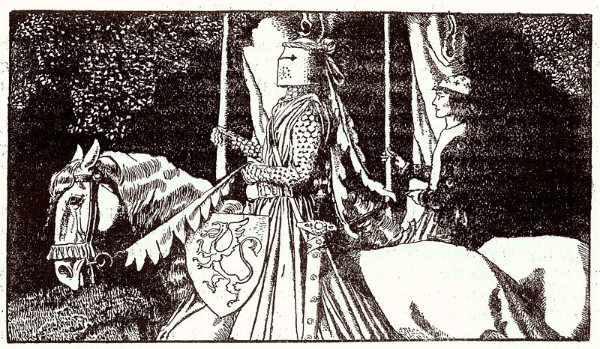 A 1900s depiction of Sir Gawaine by Arthur Pyle.

Remember Sir Gawaine from the Escanor entry? He happened to also be the nephew of King Arthur, and went on many adventures aside from the two we mentioned. He might be who Hawk is based on.

Gawain’s name is actually a morphed version of his true name: Gwalchmei. In Welsh, that means Hawk of May.

Gawain was loyal, chivalrous, kind, and an ideal knight. That certainly sounds like the Hawk we know and love!

More than Angels: Understanding the Symbolism in Haibane Renmei

On the surface, Haibane Renmei seems to be alluding to religion… but there is so much more to it than that. The beautiful anime is rich in symbolism, some of which we explore here.