Shokugeki no Souma ("Food Wars") was first published in 2012 and received an anime adaptation in 2015. Written by Yuto Tsukada and illustrated by Shun Saeki, the series is set in an elite cooking school called Tootsuki Culinary Academy. Chef Yuki Morisaki concocts the mouth-watering recipes we see created by the various students within the series. So - what makes it great enough to have attained the number five spot in the list of Top Twenty Anime for 2015 ? 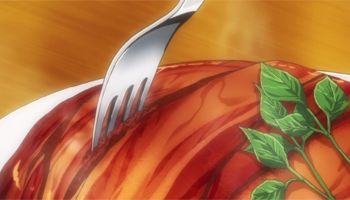 Shokugeki no Souma boasts a solid storyline and a wide range of interesting characters. While the sheer size of the cast can make it hard to explore each character in-depth, you'll find very few have been left on the sidelines. Everyone has a place in the narrative. Everyone has their own modes of thinking. Watching polar ideals clash together is one of the greatest draw cards of this series.

In this article, we'll go over some of the major characters and themes which are brought up in the series.

( Warning: Minor spoilers from the manga will be brought up.) 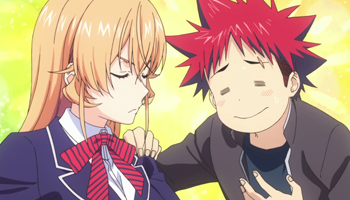 First up, the characters. Almost everyone in this series is a great chef - so much so it makes you wonder whether there can be any further development of their skills or character. As we quickly discover, there is plenty. The slapstick comedy and character caricatures present may sometimes give the impression that there's very little substance to the cast. However in this case, it's more like they're deliberate techniques used to make us laugh and want to continue reading or watching. By tapping into laughter, we're drawn in to the personal stories which drive this series.

Let's begin with the main character. The protagonist, Souma Yukihira, is presented as a young man from a working class, family restaurant background. Not only is he an excellent cook, he delights in feeding his cooking failures to unsuspecting classmates. Within a short time we see that he's brash, self-confident, and even skilled enough to impress the so-called owner of "God's Tongue", Erina Nakiri (although she denies it at the time). He is also extremely adaptable to circumstances, able to whip up a tasty dish for the Polar Star Dormitory mistress with just a small bucket of squid and kitchen leftovers. With such high credentials, what more could there possibly be for him to learn? 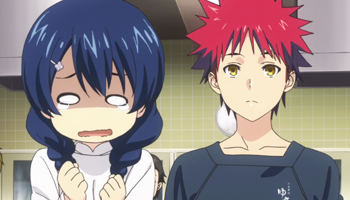 As it turns out: a lot. Souma's self-confidence is as much a strength as it is a weakness. When he teams up with the shy, insecure Megumi, he relies on his own talent in order to buoy her through the first few challenges she faces. It's when he's told that he has to assist her instead of the other way around for a crucial shokugeki, and they lose, that he has his first taste of humiliation. It's a defeat different to the cook-offs he has with his dad because of the pride invested in the battle.

Other characters receive similar challenges and grow through them. Ikumi Mito (better known as "Nikumi") is not shunted to the side after her shokugeki loss to Souma. Where formerly she saw meat as the main aspect of a dish, she gains an appreciation for how meat can be used as an enhancer. Building upon her loss, she goes on to use this learning and deliver a wholesome meat and rice curry during the Autumn Elections. Nor can we forget Megumi, who possesses neither the drive nor the same ambition as the others in her grade. However she does discover her own pride in cooking, which gives her the confidence to compete with everyone else on an equal footing.

There are numerous other examples but it would take too long to name them all. What's remarkable about this cast though is the amount of differing approaches they have towards food and competition. Clashing ideals form the basis for many of the shokugeki which occur, being the lead cause of conflict between chefs - particularly the Elite Ten and free-minded students like Souma.

As mentioned, each character has a different approach to their cooking. Individual specialities aside, most have some sort of talent or life experience which leads them to approach their cooking in a certain way. For Souma and the rest of the Polar Star Dormitory, that is "learning from mistakes" - improvement based on experimentation. For Erina, it is "established perfection" - creating the perfect taste from well-known, established methods. In fact many of the chefs in Tootsuki are elitist, sneering upon anything less than fine quality ingredients and methods which best bring out their flavours. Their attitude is what makes Souma's insurgence all the more shocking. Souma can achieve as-good results - better, even - with supermarket produce compared to those who use expensive or high-grade ingredients. 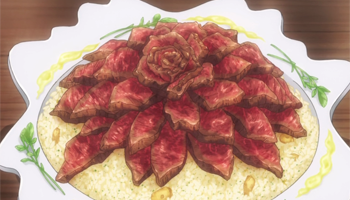 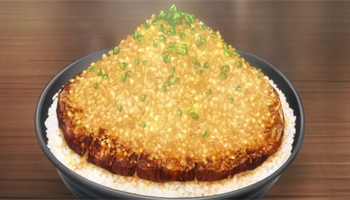 (Above: Ikumi's Roti don, made with A5 beef, versus Souma's Chaliapin supermarket steak don)

Many of the chefs who lose to Souma are people who become so caught up in their gimmicks or specialities that they fail to realise the larger picture. Ikumi Mito, the "Meat Master", was one; Alice Nakiri is another. Alice takes so much pride in her skill with molecular gastronomy that she focuses too much on spectacle when presenting her dishes, which is the reason for her loss against Souma in the Autumn Election semi-finals. By contrast though, the few chefs who succeed against Souma are those who demonstrate a superior ability to cater to their eaters. Usually it's because they think of something that he has neglected to consider. 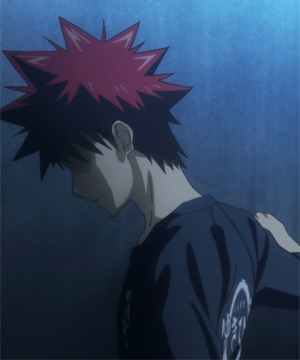 While it's common practice at the Academy to mock those who lose shokugeki or fail challenges, Souma instead learns from his failures and uses those lessons in his subsequent dishes. He's undeterred by his classmates' put-downs - something which shocks them. Failure, after all, is seen as a deeply shameful thing because a single failure can ruin a great chef's reputation for a long time. However, Souma instead sees failure as an opportunity for improvement.

Such a win-or-fail attitude is the core problem of Tootsuki Academy. It's a given that a stratified society will emerge in such a highly competitive environment, but it has the effect of nurturing an elitist culture which ignores certain strains of innovation. Although there are research clubs dedicated to specific types of food, these clubs seem to be more about creating new variations rather than new ways of cooking said food.

This culture is why Souma, with his 'common' background, is seen as an affront to Tootsuki. He thinks of methods which the the elite would not deign to consider, understands that it's not the quality of the ingredients you have but what you do with them, and combines techniques with little thought to their cultural origins. Essentially, Souma is a practical chef - he makes use of what works and what's on hand. He doesn't do what "should" be done, he does what needs to be done to get the result he wants.

The prime opposition to Souma's methods comes in the form of one Erina Nakiri. She is a champion of "proper cooking", having been raised to believe that her perfect tongue means she is the authority on how food should be prepared and how it should taste. Throughout the series, she vehemently denies Souma and his style of cooking, viewing him as an insult to high-class cuisine despite her tongue telling her otherwise during Souma's application test. It isn't until much later (around chapter 140 of the manga) with exposure to the Polar Star Dormitory residents' cooking, that she begins to realise her approach may not be the absolute one. 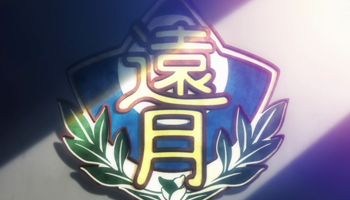 The conflict between Erina and Souma encapsulates the underlying issues mentioned above: elitism and pride. Although Souma and his Polar Star friends are ultimately fighting the larger establishment, Erina provides a human parallel for the changes that may one day shape Tootsuki.

To Watch or Not To Watch?

Shokugeki no Souma isn't your average shounen high school story. If you can look past the fanservice and over-the-top orgasmic food experiences, you'll find that there is a lot to take away from this series. There are pertinent lessons to be learned from the clashes between Souma, his yearmates, and the elite students. The struggle to become number one is not an original story on its own, but that's almost an excuse for the series to showcase the variety of talents that individuals can have. Learning from mistakes and improving oneself is more important than aiming for perfection - in fact it's in the pursuit of perfection that mistakes must be made. While there's value in using tried and tested methods, evolution can't happen without experimentation. In fact, that's how cooking has become what it is now.

Lastly, for what it's worth, this series does balance female fanservice with male. It isn't afraid to show gratuitous shots of near-naked male bodies going through the same orgasmic taste bud experience as the females. In fact one could say that equal treatment is the icing on top of this metaphorical cake. It may not be perfect equality but it's not one-sided.

And if in the end it's still too much for you to enjoy everything else this series has to offer, then that's okay. 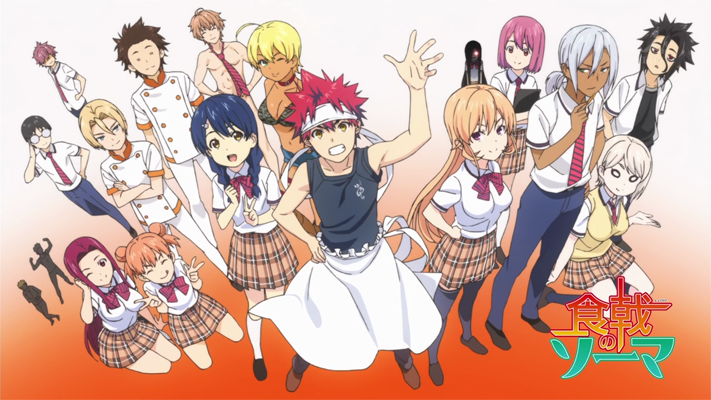 What's In a Name? The Importance of Names and the Nameless in Amnesia

Name are of great importance, and for a character it is an essential part of their identity. So what happens when a character lacks this vital part of how the viewer sees them? Here is a deeper look at names in anime and why the heroine of Amnesia remains nameless.