Have you ever watched the anime Hyouka, and wondered about the Hinamatsuri festival scene in the final episode? Or maybe seen the cute animals of Shirokuma Cafe set up a Hinamatsuri display, and not known what that was about? Or perhaps even the manga called Hinamatsuri, (which is very, very funny and certainly worth reading)?
For those of you who don't know all about this Japanese tradition, and even those who do and want to know more, here is a round up of all Hinamatsuri basics - everything you need to know about this fascinating festival!

Every year on March 3rd, Japanese people celebrate a very special day: Hinamatsuri, also known as Girl's Day or Doll's Day. Through many rituals and displays, people pray for the futures of young girls, and for their health, happiness and safety in life.
It's most famous for the many dolls that are displayed on a tiered platform during the festival, a custom which began during the Heian period about a thousand years ago.
Hinamatsuri comes from an even older custom, which involved making little straw dolls, putting them in paper boats and then floating them down a river towards the sea. People hoped that the dolls would take troubles and bad spirits away with them. These days, the boats are then taken back out of the water and burned in a shrine, because in the past fishermen kept catching the boats. 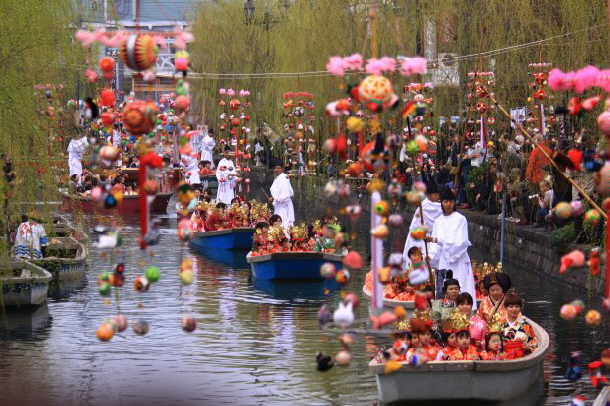 What are the Hinamatsuri dolls?

So what makes this festival so special? Well, the dolls on the tiered platforms are a very well-known image for Hinamatsuri, and you can find them displayed in windows of Japanese stores all around the world during late February and early March.
Hinamatsuri dolls are a popular part of Japanese culture, and were a huge part of a Pokemon anime episode about Girl's Day called "Princess vs Princess". In fact, the episode was meant to air on March 3rd as a special Hinamatsuri celebration. However, the episode was delayed after a previous episode, now infamous, caused hundreds of people around the country to get seizures from bright flashes. So the special Girl's Day episode didn't air until months later. 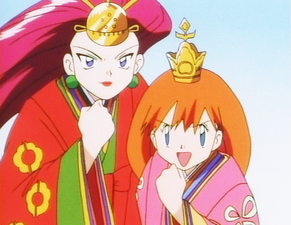 [Hayate no Gotoku!! (Hayate the Combat Butler!!)](Hayate no Gotoku!!) also has a Hinamatsuri doll play a huge role in one episode. When a character in one episode breaks a cursed doll, poor Hayate is hit with a cross-dressing curse, forcing him to wear a maid's outfit. He has to try to meet up with someone at the Hinamatsuri festivities to beat them, in order to break the curse... 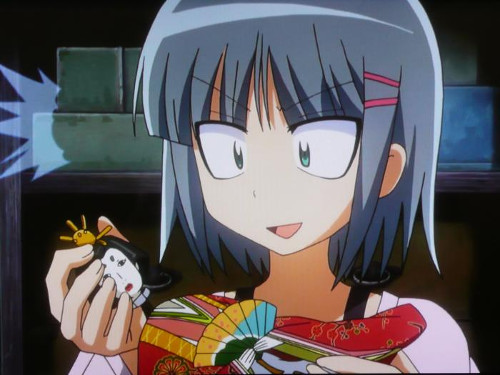 The platform on which the dolls are displayed is called hina dan, and the red cloth covering it is called dankake. Various dolls sit on the five to seven layers in specific orders. They represent the Emperor and Empress, their attendants and court ladies and musicians. Traditionally, these are all dressed in the typical court clothing of the Heian period.
You can see the dolls especially well in Episode 8 of Recorder to Randoseru. For those who don't know this particular anime, it's about siblings Atsushi and Atsumi. Atsushi is an elementary school boy who looks like an adult, and his sister Atsumi is a high school girl who looks like a young child. As you can imagine, this constantly causes confusion and trouble around them. In this episode, Atsushi gets invited to celebrate Hinamatsuri with his girlfriend Hina, but her parents, mistaking him for an adult, get suspicious and turn him away. 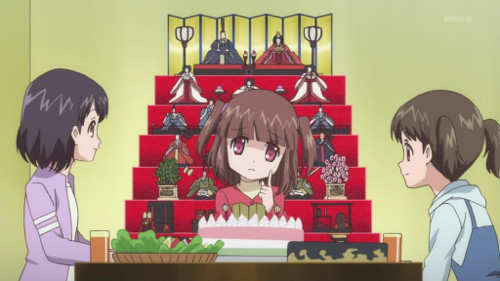 In the anime Shirokuma Cafe, this type of display is what the young penguins try to set up in Episode 46. Of course, Shirokuma Cafe is all about cute animals making mistakes, so things start to go wrong pretty quickly. Before they know it, they are into big trouble... 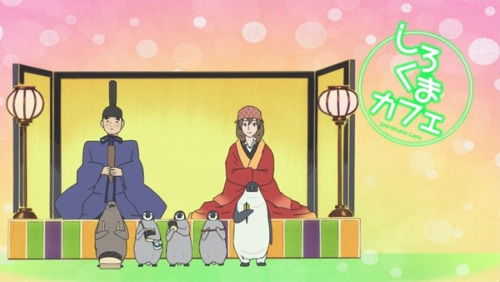 Often, the lowest layers have displays of miniature furniture on them, and some families leave food on the display with the dolls. Some doll sets are then passed on from mother to daughter, staying in the family for many years. In some families, the ancient, antique set of dolls is one of the families' most treasured belongings.
There's an especially beautiful Hinamatsuri display in the anime K-On! Being a fairly realistic show about high school life, it's only natural that the Hinamatsuri festival plays a part, too! 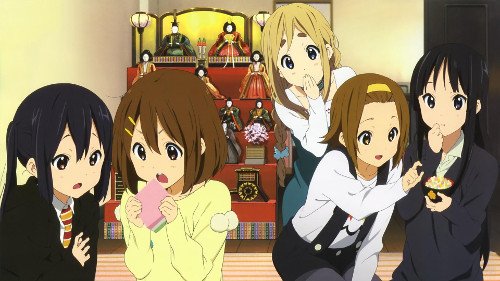 Hinamatsuri displays are put up in February in preparation for the festival, and stay there as beautiful decorations on tables and in shop windows. But one more thing is important: they have to be taken down by March 4th. Tradition says that otherwise, the daughters of the household will marry late. 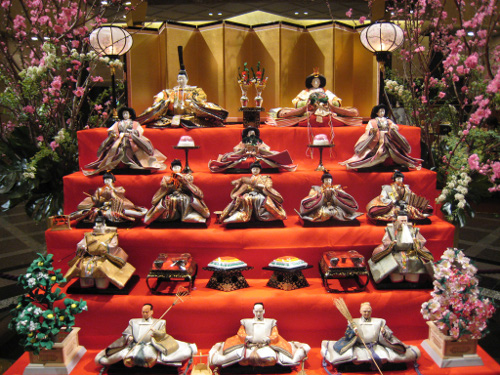 Food is a huge part of Girl's Day (because you can't have a celebration without lots of food!). The most popular traditional drink for the occasion is shirozake, which is a sake made of fermented rice. People also eat hina-arare, which are small rice crackers flavored with either sugar or soy sauce. Whilst you can eat these all year round, one thing is different during Hinamatsuri- they are colored in lots of different colors, bringing brightness to the food for the special occasion.
People also eat hishi-mochi, which is a diamond-shaped cake in three different colors made of mochi, a sticky rice cake. Sushi and clams, especially clam soup, are also traditionally eaten. You can see many of these foods being eaten during the Hinamatsuri episode of Shirokuma Cafe. 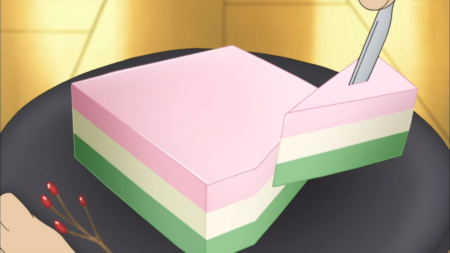 Another regular part of Hinamatsuri celebrations is a parade. Often, this involves beautiful girls in traditional kimonos. In the final episode of the anime Hyouka, the characters take part in a Girl's Day festival, and you see all of these amazing sights. It's a beautiful episode, too, with lovely images and some pretty scenes. It manages to capture the festive spirit of Hinamatsuri very well. 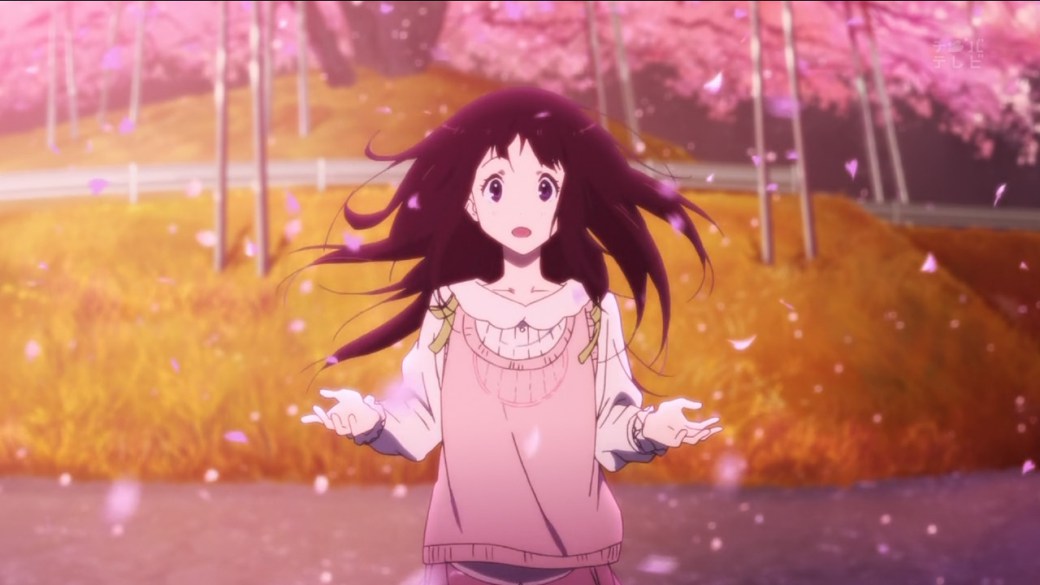 As well as the traditional doll platforms, Hinamatsuri happens to be in the spring, when the peach blossoms are in bloom. So of course sakura are often used as decorations, making beautiful, delicate displays to compliment a wonderful, feminine festival.
There are also some beautiful clothes that girls wear during Hinamatsuri- lovely pink, flowery kimonos in traditional styles to celebrate this age-old festival. Check out Yuru Yuri, an anime about a group of friends who run an Amusement Club at school. Such fun-loving girls wouldn't let the amazing festivities and clothes of Hinamatsuri pass them by, and bubbly and optimistic Kyouko Toshinou looks wonderful in hers! 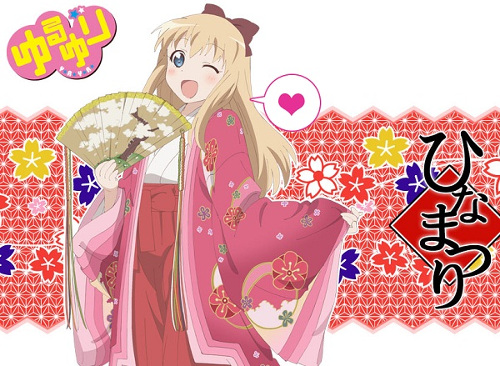 So this is Hinamatsuri, a wonderful festival full of food, music and beauty and about wishing the best for girls and women. Now you'll know more about it in case you see it in an anime one day. It's a very special day and one that is a big part of Japanese culture.