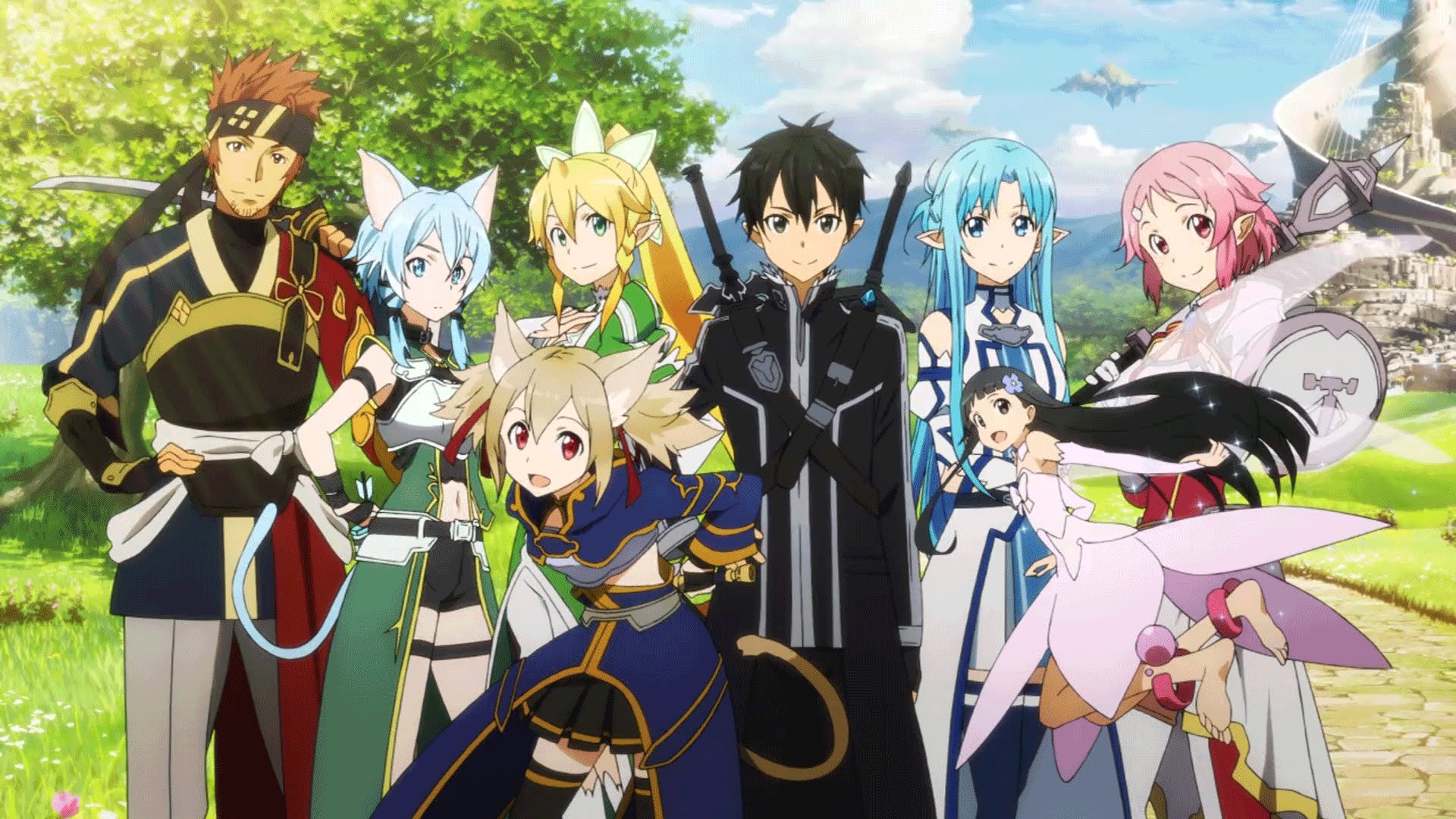 The story of Sword Art Online (SAO) is not restricted to any one gaming platform. There are three different virtual environments that Kirito, the stories protagonist explores. Each gaming environment has different rules, characteristics and objectives, and makes use of different avatars for each virtual reality.

SAO is the original platform created as the “death game” by Kayaba Akihiko. It is operated by the Cardinal system which manages the internal operations of the game. Alfheim online operates from a version of Cardinal system which enables a similar virtual structure but with different landscape and character appearance. The Alfheim universe surrounds the world tree where the ultimate test of the game lies.

SAO takes 10,000 VRMMO players and captures their consciousness within the game. Kayaba Akihiko, the game master and developer, creates the death game version of SAO in order to “make a world free of laws and restrictions” and to see his childhood dream of creating a castle floating in the sky come true.

Players are unable to log out of the game and are advised that they must clear all 100 levels to clear the game. If a player is killed in the game, they die in the real world too.
Players are equipped with a user interface and have the ability to level up, acquire new skills and items, and progress through the game solo or as part of a party or a guild (a group of players banded together, generally of similar level). Player vs player (PVP) killing is discouraged within SAO. Players who have killed other players can be identified by a yellow or red marker directly above their avatar. Only one guild takes pride in killing players from other guilds.

The main objective of SAO is to clear the 100 floors of the game which will allow all players to log out and return to real life. Players are trapped within SAO for 2 years in total although only 75% of the levels are completed. The game is cut short as Kirito calls out and battles the final boss upon realizing he is an immortal object and therefore, a system created ‘immortal object’. The battle is epic. 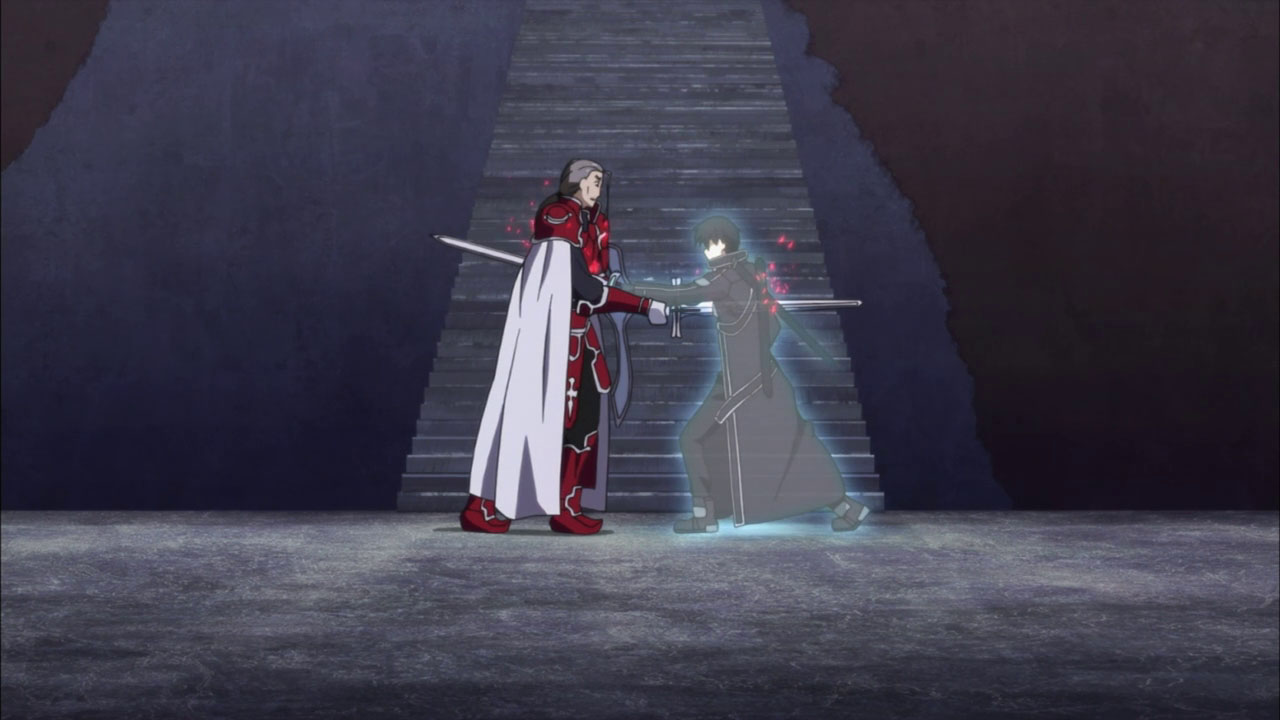 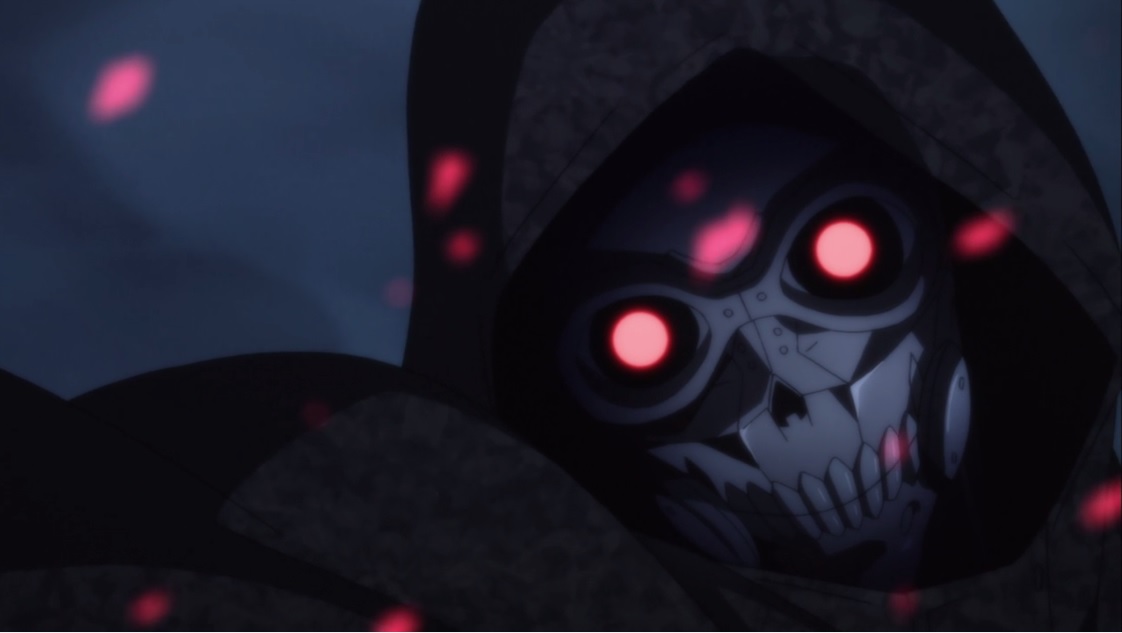 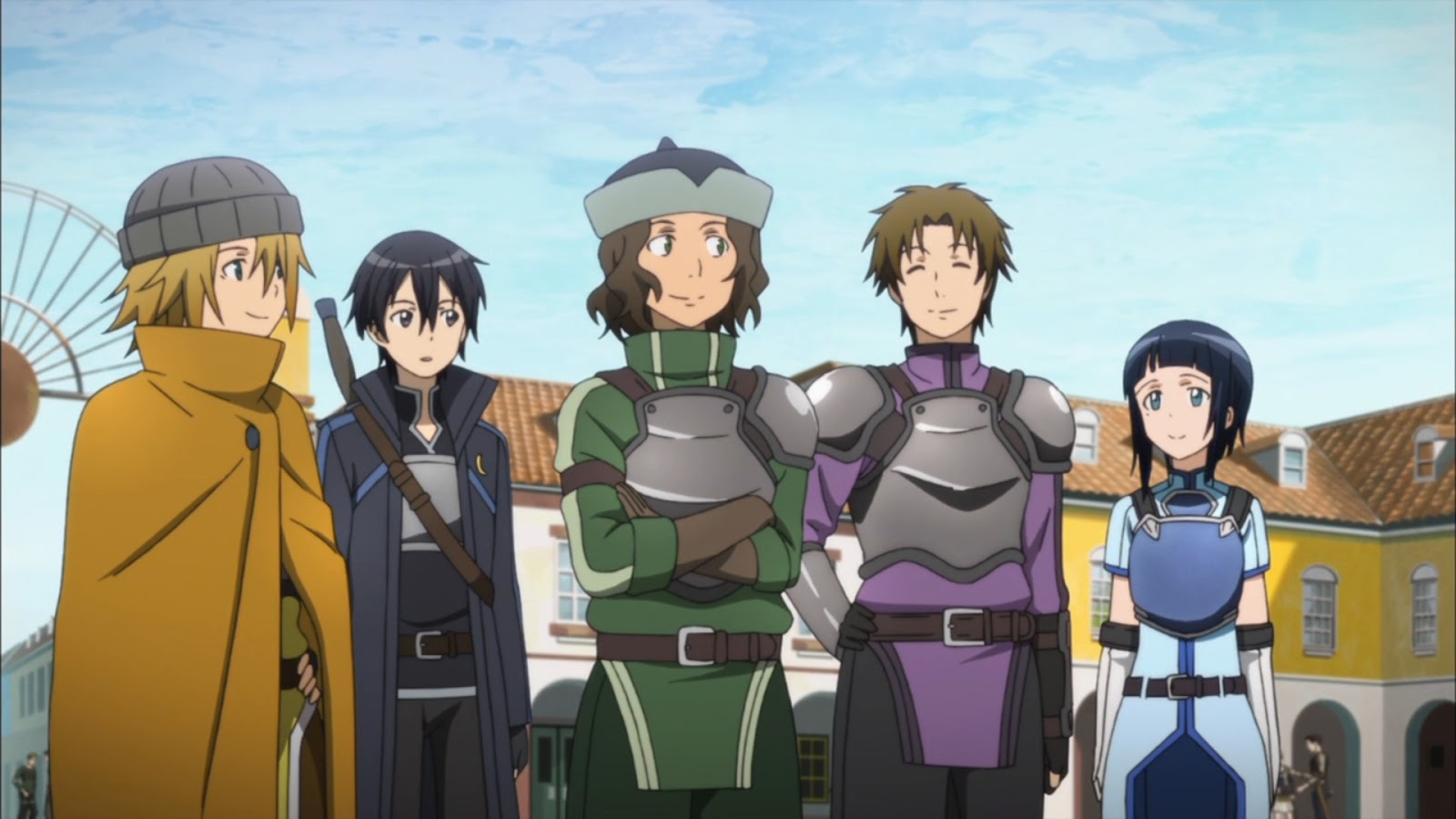 The Moonlit Black Cats are one of the first guilds Kirito interacts with in SAO. He quickly takes a liking to the bond that binds them and begins to feel part of the group after a short time. Kirito comes to the aid of Sachi, one of the weaker group members who is contemplating suicide and after some persuasion, manages to convince Sachi that she will make it out of SAO alive. The guild accidently activates a monster trap whilst leveling on one of the lower floors. Despite his significantly higher level, Kirito is unable to save any of the guild members from being annihilated. 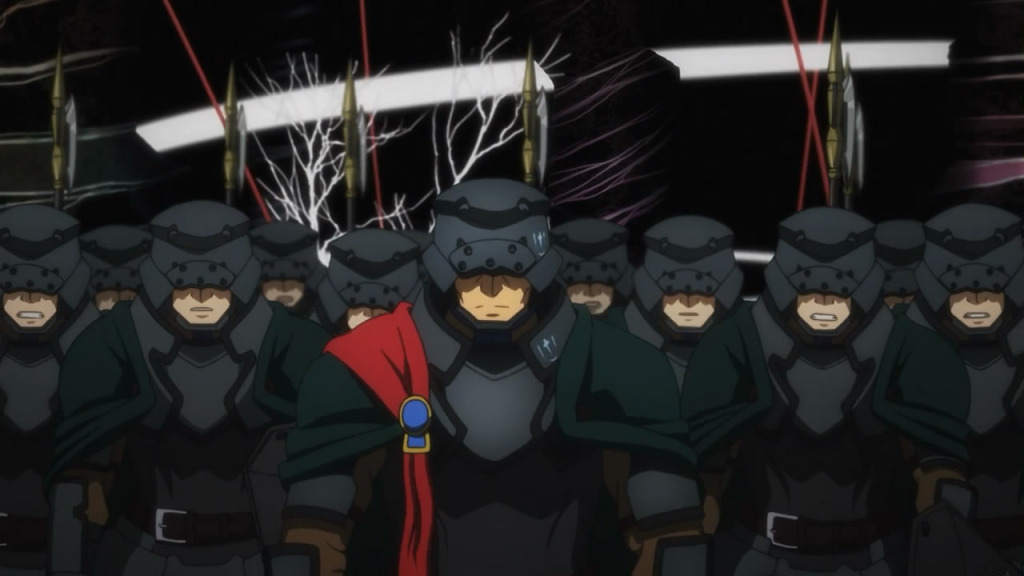 The Aincrad Liberation Force are a massive army-like guild trying to regulate order within the SAO world. Their ‘strength in numbers’ is effective against tackling mobs, but incurs heavy losses for them as a guild when facing stronger opponents or bosses. The nature of the ALF changes from a player friendly assistance guild to a group of army extortionists as a result of mutiny and leadership changes.

Knights of the Blood Oath 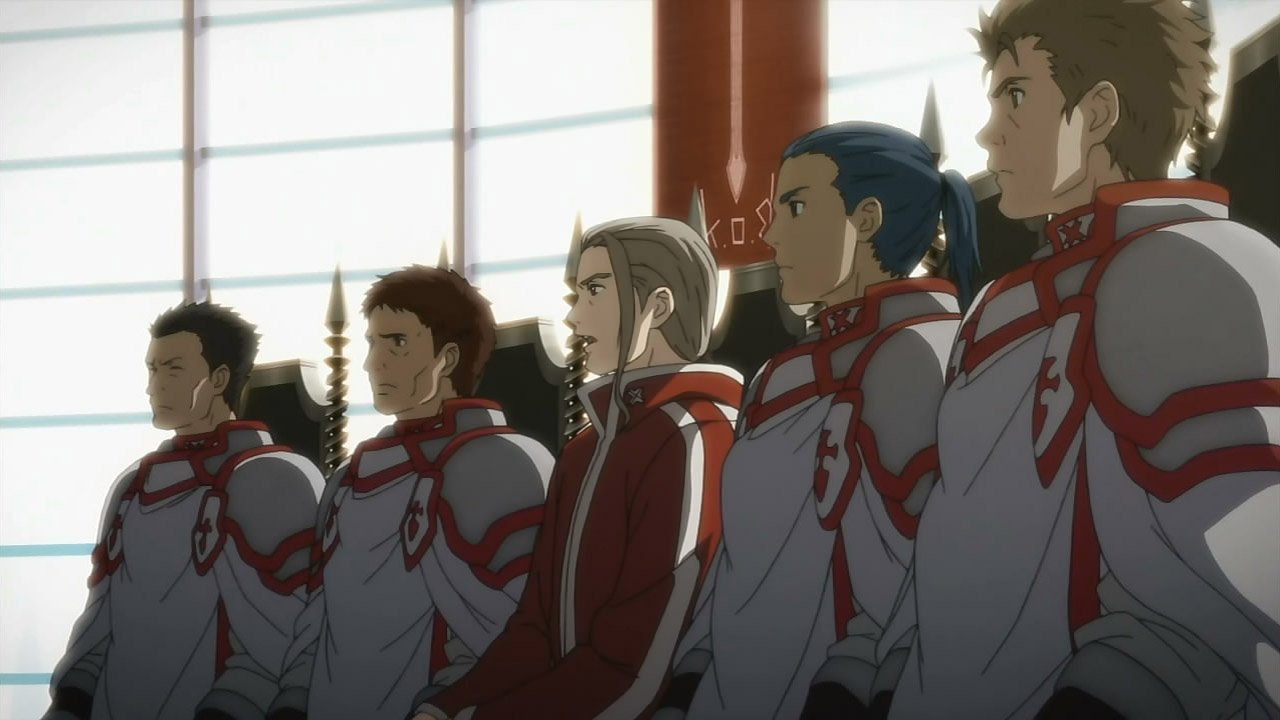 The Knights of the Blood Oath play the most pivotal role in SAO as the guild has the highest level players including Asuna, the guild's second in command who is unmatched in speed and agility. Asuna has a strong relationship with Kirito and becomes a central character in the storyline. The commander, Heathcliff is the strongest player in the game who defeats Kirito and forces her to join the guild.

Kirito explains to Asuna that he has to join GGO as a favor to Seijiro Kikuoka from the Ministry of Internal Affairs Virtual Division. Asuna understands though she explains she has a hard time trusting Seijiro Kikuoka and wants Kirito to be back to live the virtual family life with Yui. Kiriko’s primary purpose for entering GGO is reconnaissance on the mysterious Death Gun who has been targeting high profile professional players, causing them to die outside the virtual platform.
Kirito's first encounter with Death Gun is a face to face standoff. After making a reference to Kirito’s sword skills and asking him if he is the “real deal”, Kirito realizes that Death Gun is an SAO player when he notices the mark of the Laughing Coffin Guild. Kirito racks his memory to determine who Death Gun is and when they met in SAO.

Although most of the character development throughout SAO gravitates around the relationships between Kirito and most of the female players that he interacts with, the development of Kirito as a person is evident as he progresses through each task or obstacle he is presented with.

Asuna is unquestionably Kirito’s main relationship within Sword Art Online. She was his friend when fighting the first level boss, then, gradually, a romantic connection between them established. Although her position of power and skill within the game enables her to be a strong and independent heroin in her own right, Asuna is still overwhelmed by Kirito’s unfaltering skills and agility. The relationship between Asuna and Kirito continues to blossom and eventually they retreat from the front lines of the battle to be one with each other. Asuna again plays a vital role in Alfheim online as Kirito enters the platform to rescue her consciousness from the game's designer. Further into the story, Asuna plays more of a supportive partner for Kirito, as he embarks on the GGO mission to uncover the seemingly impossible murders occurring.

Asuna and Kirito come across a young girl with no memory, shortly after declaring their love for one another. They bring the girl back to their home and nurse her to health. Asuna and Kirito discover the girl’s name to be Yui and are discomforted by the fact she is so young and alone. The relationship between Asuna, Kirito and Yui quickly becomes similar to a normal family structure with Yui openly referring to them as mummy and daddy. After some time, Asuna and Kirito understand the paradox of remaining in the virtual family bliss. Unless they join the game, they can never live this life in the real world.

Kirito is surprised when initially entering the GGO world, as his avatar has feminine characteristics unlike his typically masculine and agile appearance. He is mistaken several times for a female, most importantly by Sinon, a relatively high level main character wielding a rare and gigantic sniper rifle. The relationship between Kirito and Sinon is different in contrast with that of Kirito and Asuna, primarily because Kirito no longer has pre-existing knowledge or abilities within the alien world of GGO. Most female characters that interact with Kirito tend to fall for him almost instantly evident through Kirito’s relationships with Yuuki, Lizbeth, and Sachi. Even guild leaders Alicia Rue and Siune (Alfheim) are instantly taken by his strength, heroic nature and generosity.

Throughout the Alfheim online saga of the story, Kirito is unknowingly in alliance with his cousin Kirigaya Suguha who is also secretly in love with him within the virtual world and also in the real world. The real life relationship between Kirito and Kirigaya Suguha (Sugu) is strained as Kirito is captured in SAO. When he awakes and reenters the virtual world in Alfheim online, he is distant toward Sugu. The void between them causes Sugu to yearn for his attention whilst within the virtual world it is again his admirable qualities which cause Sugu to fall for Kirito. The relationship is complicated but is later stabilized upon the completion of the game.

Although Kirito encounters and leaves an impression on many of the female characters he encounters, he remains true to Asuna whilst bringing all of the essential characters together as friends through their common experiences. Even Sinon, who has lost her only real life companion, becomes part of the gaming group to find a sense of belonging. The later and final episodes of Sword Art Online 2 see the band of friends clearing levels and venturing on quests within the virtual world across their school holidays. Through the trials faced in the virtual world, the players of each of the different gaming environments band together in the real world. 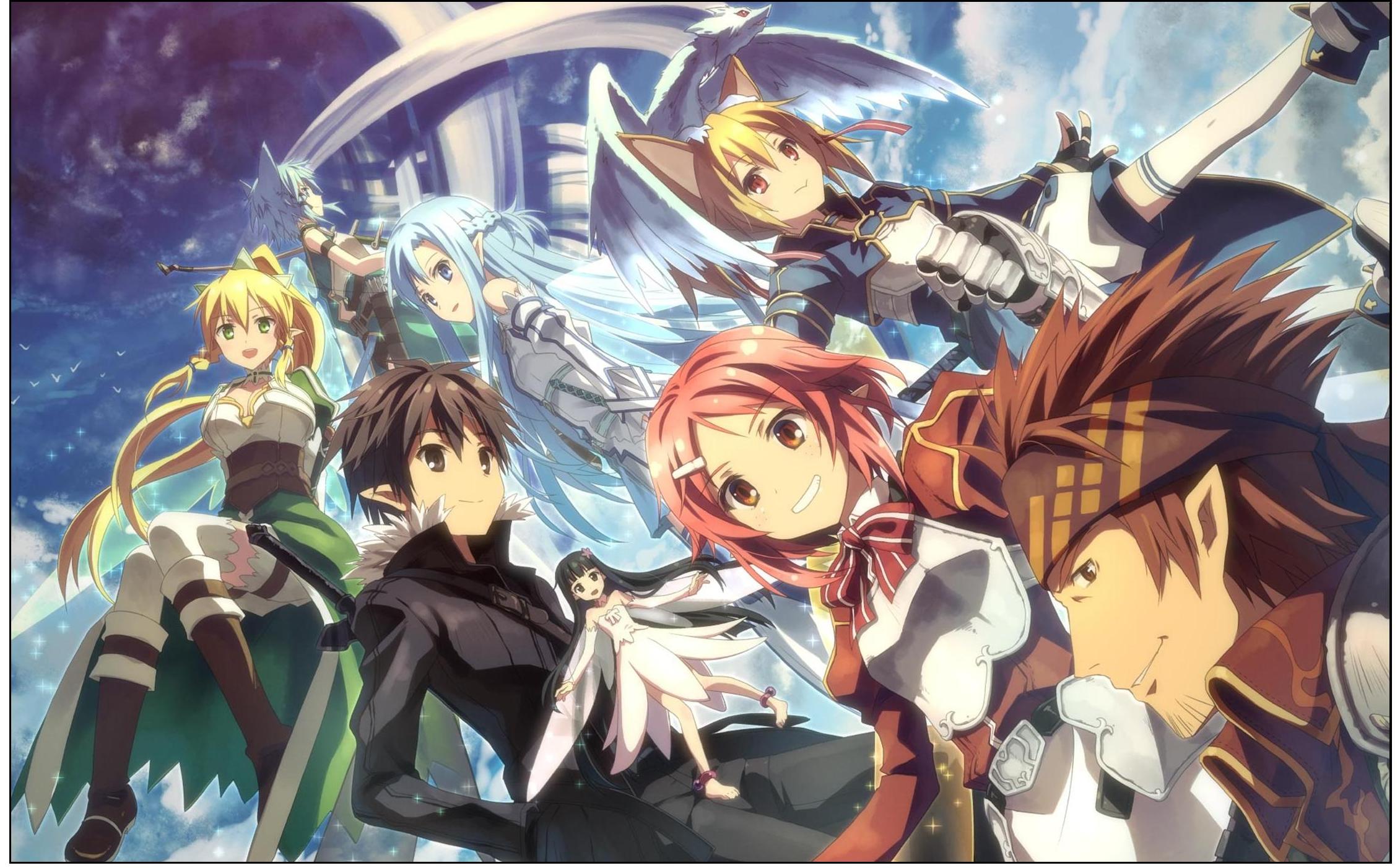 Being a more light hearted and romantic anime, SAO might not suit the tastes of all. However, if you like action and have played any online MMO/RPG before then you should definitely check out SAO as it makes use of tons of gaming jargon, structure and humor.