Tokyo Ghoul by Ishida Sui features powerful ghouls and some intense combat scenes. Here's our ranking of the most powerful characters in the series! Tokyo Ghoul is a beloved manga and anime series, featuring plot twists and strong characters who are constantly changing! In this article, we're only looking at the characters in the original Tokyo Ghoul anime. Some of these entries are speculative, based on what's been hinted at so far in the anime; there's definitely still a lot that's left to be uncovered and many character's true powers are shrouded in mystery. One thing's for sure though, you definitely don't want to bump into any of them in a dark alleyway! Don't let this cute ghoul's looks fool you! She's still young, but she has great promise as a fighter, having inherited both her father's offensive rinkaku and her mother's defensive koukaku kagune. While less useful for combat, her hearing and smelling are also very impressive, and she's able to differentiate minor changes in both. 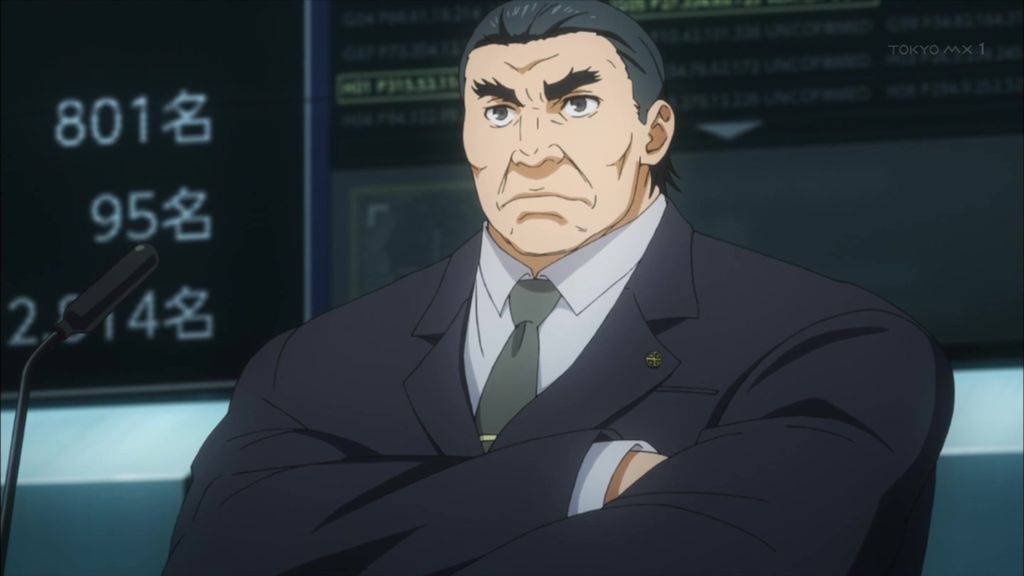 Kuroiwa belongs to CCG and is a special class ghoul investigator. He has high grip strength, recovery, and is an extremely capable fighter, and was one of the only humans able to wound one of the strongest ghouls. His son inherited his talent, and is a rank 1 investigator. 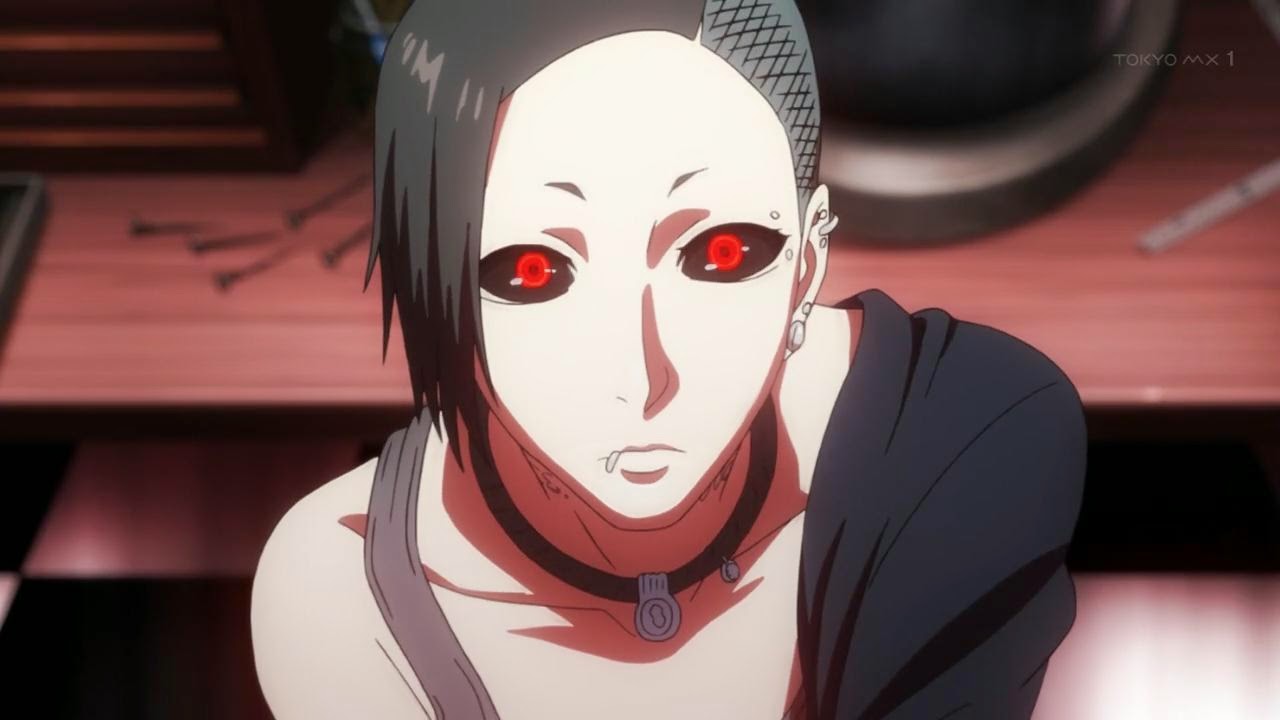 Uta used to be a leader of the 4th ward, but by the start of Tokyo Ghoul, has started a successful business selling masks to both humans and ghouls. Of course, just because he sells masks doesn't mean he lost the strength that made him leader. He can regenerate rapidly, and has never been seen fighting with his kagune, but he doesn't seem to need it as he can match strong combatants with his bare hands. We can only speculate how strong he would be fighting at full power. 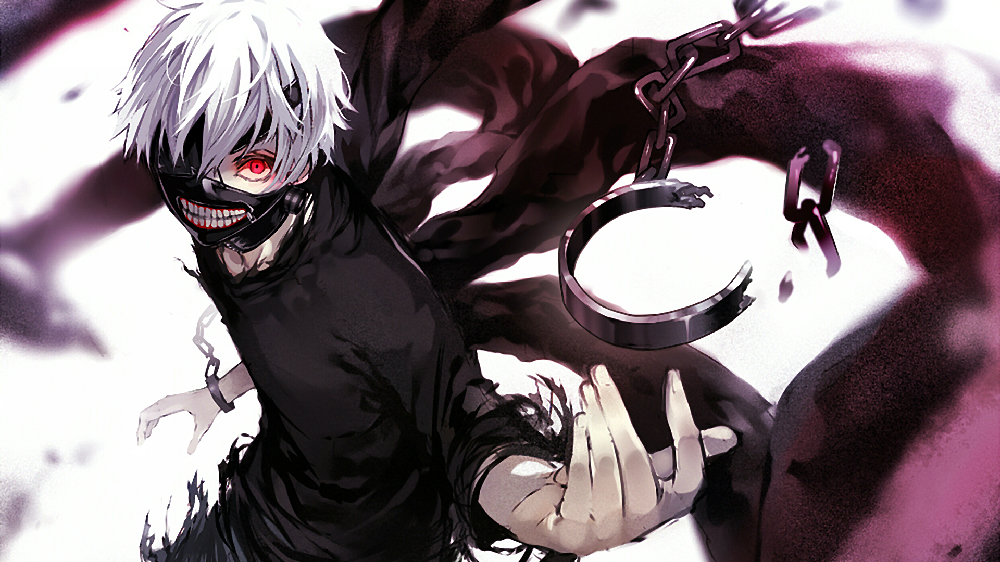 Kaneki Ken was born as a human. After being attacked by a female ghoul, he became half-human and ghoul, and learned to control his ghoul abilities. Ken awakens his kagune, becoming a kakuja, and gains the nickname of Centipede for his kagune's appearance.

Ken Kaneki' hybrid status makes him far more powerful than naturally born ghouls. His Rinkaku Kagune has evolved overtime producing more tentacles with greater reach. And he's also become adept in manipulating his Kagune with ease, even though he struggled with this initially.

Kaneki's also a great strategist who can think on his feet, while also being proficient with the Yukimura 1/3 Koukaku quinque. And if that doesn't make him a total badass already, he also possesses extraordinary superhuman strength, agility, endurance and regenerative abilities. 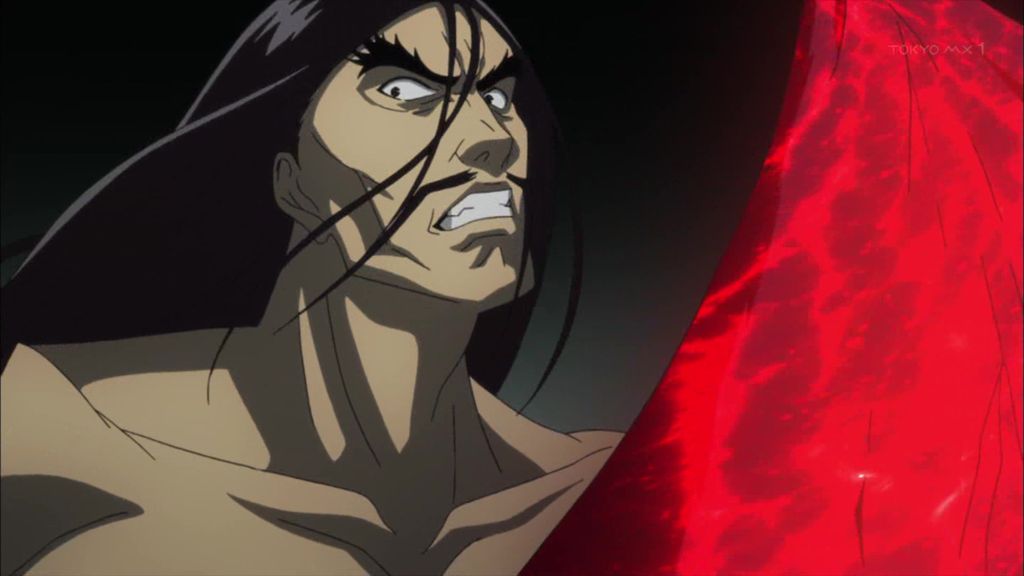 Shachi is the former leader of the 6th ward. Although he looks big and scary, and is indeed very strong, he's a gentle soul, and avoids killing unnecessarily. A rank SS bikaku, his ghoul powers are not the only things that make him one of the strongest characters, as he has mastered several different martial arts. 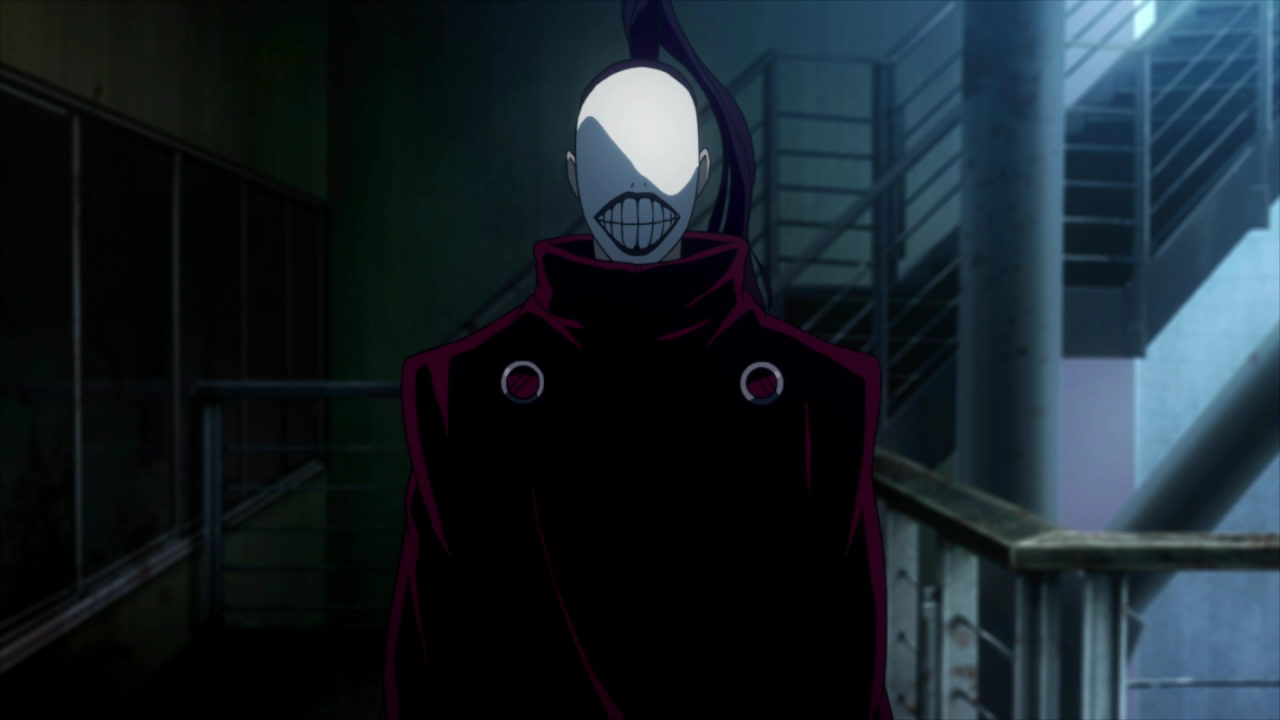 Noro is one of the direct subordinates of the One-Eyed King, who is the leader of the terrorist organization Aogiri Tree. Noro is strong not so much because of his combat strength or destructive power (which is nothing to scoff at). He's strong because he can win almost any fight simply by outhealing the opponent's damage! Like Tatara, there's a lot of mystery surrounding him, and could turn out to be much stronger than we know. 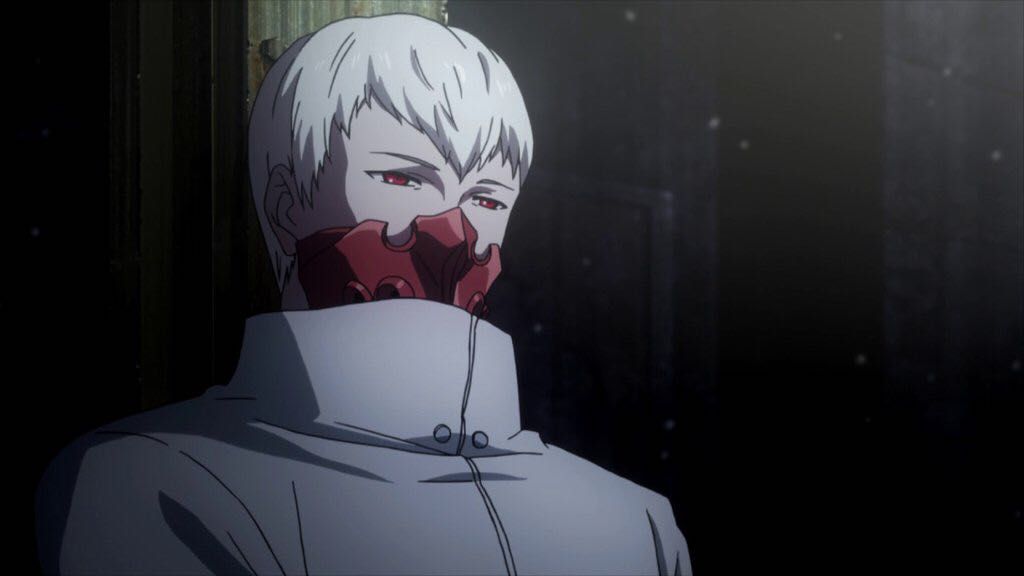 Originally from the Chinese Ghoul organization Chi She Lian, Tatara is the second in command of Aogiri Tree. Although the full extent of his abilities is unclear as of yet, being second in command and having so many ghoul subordinates surely means he is very powerful. Tatara can handle entire crowds of ghouls by himself, and seems to be able to withstand even strong direct hits as well. Because of how little we know about him, he's tentatively placed in 4th place. 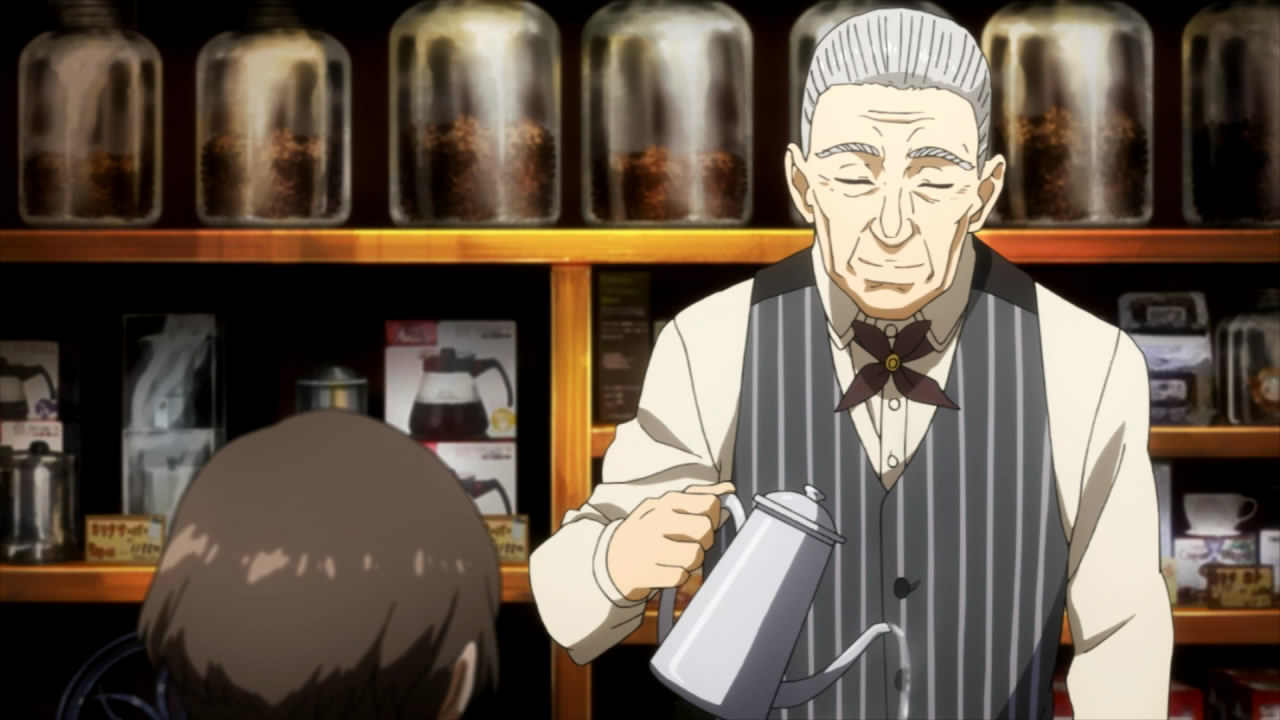 Kindhearted Yoshimura manages the 20th ward and owns a café. An SSS ranked ghoul, he was once known to the CCG as the One-Eyed Owl until later revelations made it necessary for them to change his name to the Non-Killing Owl. He's able to take on entire groups of attackers by himself, but only fights when it is absolutely necessary.

He is able to defeat his adversaries by utilizing both short and long-range attacks. In close range, he utilizes his Kakuja form which sports large scimitars protruding from his shoulders. And for long-range attacks, he shoots shards from his entire body, while his Kagune allows for various Kakuhous forms to shoot projectiles in more concentrated patterns. 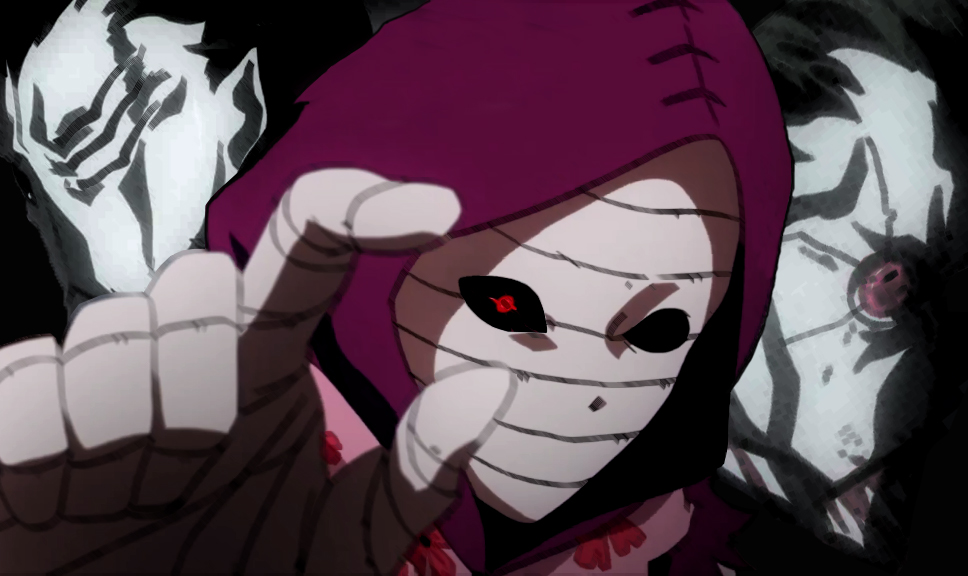 As the daughter of Yoshimura, it's not surprising that Eto would rank as one of the strongest Tokyo Ghoul characters as she's inherited her father's abilities and then some. In her human form, she goes by as the attractive Sen Takatsuki and is an accomplished horror novelist. But in her ghoul form, she's a One-Eyed Owl and founding member of Aogiri Tree.

Eto's Ukaku Kagune takes the form of freakish appendages shaped as arms, legs, eyes and mouths coming out of her back which are controlled by her thoughts. Her kagune can also be detached, thus embroiling her enemies. She's also capable of manipulating her Ukaku Kakuja in changing its form. Beyond that, she boasts tremendous agility and regenerative abilities. 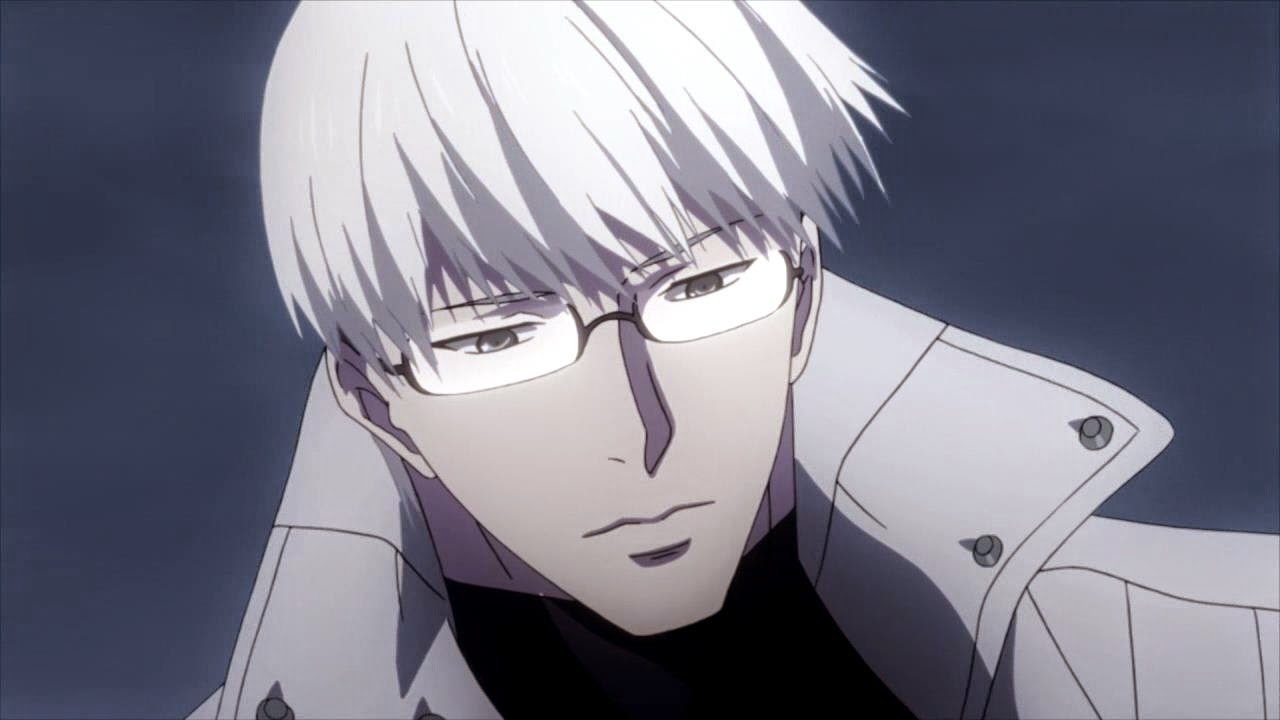 One of Kishou Arima's many traits is that he's calm and collected, even when the odds are stacked against him. As a half-ghoul, he possesses extraordinary physical abilities which surpass that of his peers.

His lightning quick reflexes leave his opponents scratching their heads, as he manages to block and dodge even their most lethal attacks. He ups the ante due to his exemplary skills with his quinque. Arima utilizes the offensive and defensive modes of the Yukimura 1/3, IXA, Narukami and Owl quinque depending on the situation he's in.