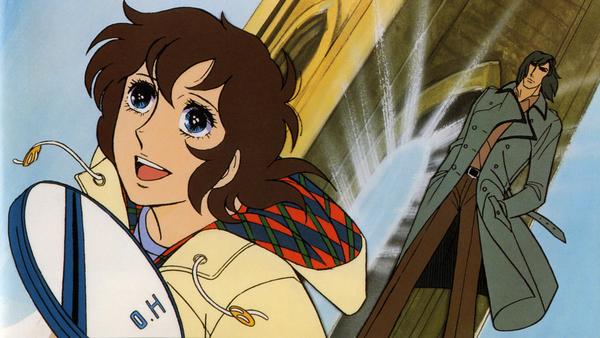 Before we get to stuff related to punching monsters in space, I believe it's a good idea to address a certain seventies title that couldn't seem to have less in common with the subject of this post beyond the title. For those of you who aren't aware of why this series is relevant to the discussion at hand, just bear with me for a moment as I'll explain everything once I get to Gunbuster. For now, let's discuss the adaptation of one of the best selling shoujo manga in history that is widely considered a classic in it's own right.

The actual story itself is about a high school girl's tennis club in which the new no-nonsense coach assembles a varsity team to represent the school; a team that happens to include a seemingly average beginner in our main character, Hiromi Oka. On the first day of practice, Oka briefly displays a modicum of unrefined talent, which catches the trained eye of the eccentric coach. From then on we witness not only her journey to silence her fellow teammates that heckle and bully her at every turn (under the assumption that she used underhanded tactics to gain favor with the coach) but also a journey that deepens her bond with both the sport itself and those willing to support her unconditionally.

To tell the truth, the reason why I'm bringing up Ace wo Nerae (Aim for the Ace! in English) has less to do with any connection to the Top wo Nerae! franchise and more to do with the fact that the show is pretty darn good on its own. It also seemed like a good opportunity to recommend it to those sports anime fans among you that can take a little oldies style melodrama. Hiromi is what really makes the series for me, as her development as a character isn't some upward, positive slope. It's full of large bumps and valleys in which she has to regularly fight against her bad habits to progress as an individual. She never becomes a tennis juggernaut by the end of the series despite making dramatic improvements to her game, so the fear of defeat is actually present every time she hits the court (it's actually more of a surprise to see her win).

This certainly isn't a technically impressive sports anime (need I remind you that it aired 1973?) but it thoroughly understands the role mental strength plays in competition as momentum often swings as a result of not having the proper state of mind. There's more to talk about with regards to Ace wo Nerae, from the supporting cast to the way in which the dated visuals combined with dramatic stylization creates a number of unintentionally funny moments, but I think I've made my point well enough here. Just be aware that in case you do choose to watch this series, that the sequels and remake - Shin Ace wo Nerae! - are as of yet unsubbed besides a few episodes of the second season. 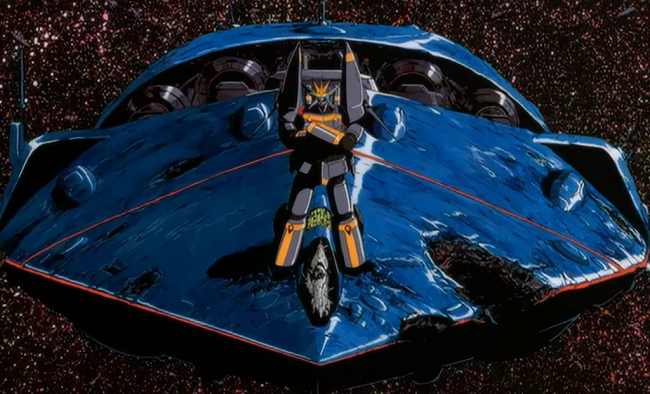 Although considered the "older sibling" of Neon Genesis Evangelion, that isn't quite the impression I got from Gunbuster when I began my recent rewatch of the OVA. Why is this? Well, the story is set in the year 2023 and begins with a training academy for young would-be female mech pilots in which a new no-nonsense coach selects a pair of candidates from the available prospects to put their skills to use in dangerous outer space missions. One of these candidates is Noriko the daughter of a now deceased space fleet Captain, that possesses no real aptitude as a pilot at first glance. From there one we witness her journey to...hold on, are you beginning to feel a sense of overlap here? Because you should. Yes, the initial set-up for Gunbuster essentially serves as one big homage to Ace wo Nerae! From the initial premise essentially being the same (albeit with giant robot training and conflict aliens as opposed to tennis), to certain parallels in character archetypes, and even the seiyuu performances of the main characters being nigh indistinguishable, Gunbuster takes the ideas present in the already good Ace wo Nerae! and pushes them in more of an epic direction.

Alright, so Gunbuster is about teenagers in robots fighting aliens in which the main character comes of age - not exactly new, even for the time it came out and certainly nothing special today right? Not quite. Gunbuster operates with a single idea that dramatically alters the relationship between the characters in a way I haven't seen before or since - time dilation (how traveling at incredible speeds in space dramatically slows down personal time in comparison to time on earth). This idea lends a sense of urgency to the missions, as not only do the pilots need to be prepared to deal with hostile forces in the cold vacuum of space, the more time spent on these missions means more that the world they were once a part of will move on without them. It's a duty that calls for sacrifice regardless of whether or not the pilots survive and return home. It is a compelling way to craft a story of what happens when humanity's will to craft a future for itself is met with both the unflinching laws of the universe and the dangers of the unknown. It's also about the idea of making compromises so as to make sure important bonds last as long as possible. Even after death, the appreciation we have for both heroes and close friends can continue existing - which is what makes the ending of Gunbuster especially powerful. 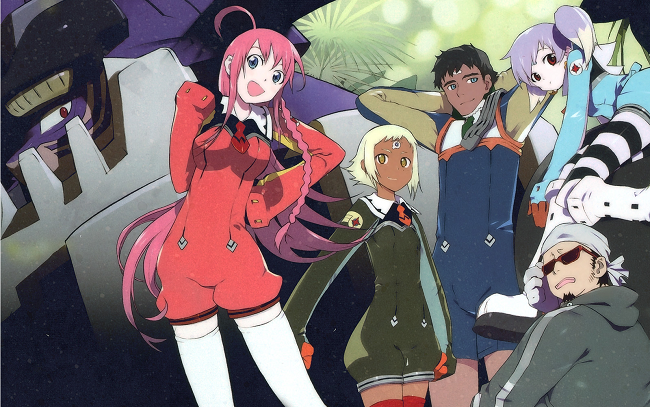 The important thing to keep in mind when moving from Gunbuster to Diebuster is to not expect more of the same. Not in terms of art style obviously, but also as far as overall themes go. Despite being a sequel to Gunbuster, comparing the two is a lot like comparing the relatively serious and mature Neon Genesis Evangelion to the far more boisterous Tengen Toppa Gurren Lagann. Diebuster feels somewhat incongruous with its predecessor for this reason. It doesn't seem natural to have a story in which giant robots can literally pick up and hurl planets like yoga balls as a sequel to Gunbuster (where nothing of the sort happens), but that's exactly what Diebuster turns out to be. Putting aside the sudden increase in the need for suspension of disbelief, Diebuster still is an excellent story in its own right.

Taking place nearly 12, 000 years after Gunbuster, Diebuster gives the battle between humanity and the space monsters a facelift. No longer do they rely solely on young military academy graduates to take on the monumental task of fighting the predators of man. Instead, humanities strongest line of defense lies in a faction of youths known as "TOPLESS", gifted with psychic abilities that allow them to command the rare and coveted "Buster Machines" at will.

Our main character is the lively rookie recruit Nono, who (despite being a robot) will do anything to ensure she can become worthy of one day piloting her very own Buster Machine to help give humanity the edge in their seemingly endless war with the space monsters. From there, we essentially get a 6 episode smorgasbord of what made Gainax's flagship titles as memorable as they were. From Gurren Lagann's energy to the story elements and callbacks to Gunbuster. More importantly, FLCL and Evangelion's themes regarding the tumultuous relationship between adults and youth, also manifest in Diebuster, albeit in a completely different way from both. These ideas are explored with the TOPLESS, whose unique powers fade upon entering adulthood. This drives a wedge in between them - with their incredible youthful potential - and the older, more jaded adults occupying the same world. The unique capabilities of the TOPLESS become an extremely on-the-nose metaphor for our need to seize the day before our dreams up and leave us behind. To the TOPLESS, whose work comes with much pride, such a transition means the death of everything they once knew, the fizzling out of all they could possibly offer to anyone.

Diebuster ultimately ends up being a story that questions this childish and simplified notion of self-worth and purports that youthful glory isn't just important for its own sake nor will it last. What matters more, in the long run, is really the lasting connections forged whilst aiming for the top. Between the fantastic visuals and well-realized ideas within the script, of course, I'd recommend Diebuster. Whilst it works well as a standalone overall, the ending will be lost on anyone who hasn't seen Gunbuster though, so make sure to get to that one first! 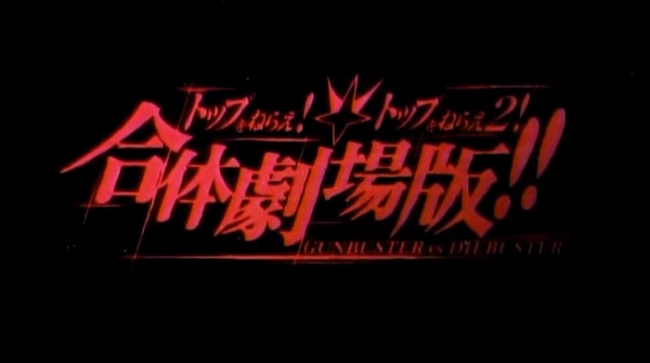 Not really much to say about this one besides the fact that it is not the awesome continuity-breaking crossover that the English title (Gunbuster vs. Diebuster) would have you believe. Instead, these are two film compilations of the Gunbuster and Diebuster OVAs, the former having no new content whatsoever, and the latter having a few altered scenes altered/added. Devious marketing aside, it's probably not worthwhile for anything besides a quick rewatch.

Though they may take different routes, both Gunbuster and Diebuster are similar stories at their core, both being about not only the grand struggle between man and the universe, but also how to overcome the interpersonal strains between people. As energetic melting pots of both past and future inspirations, and as respectable character pieces, it's remarkable just how well the two generations of Top wo Nerae! hold up to this day.