Ash Ketchum, the beloved Pokemon trainer, is fatherless. In the context of the show, he claims his Father is on a long Pokemon journey, one that started in Pallet town. However, his father has never once been shown in the entire run of the show. No one knows how long he has been gone, or even if Ash himself really knows who his father is. Of course, with information as barren as the fans have about his dad, they have created some pretty heavy theories as to who he might really be. 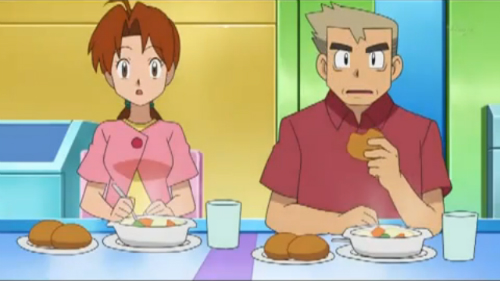 As small as Pallet town really is, it's no surprise that fans have theorized that Professor Oak is really Ash's father. He and Delilah, Ash's mother, spend their free time together, and seem to be very chummy while Ash is away. Of course, it can't be forgotten that Gary Oak isn't his son, but his grandson. If Ash is really Professor Oak's son, it would not be surprising that no one has told him. There must be a great age gap between Delilah and Professor Oak, something that is seen as scandalous in society. Perhaps Professor Oak even had himself a wife at the time Ash was conceived, which would make the theory even more of a smear on Delilah and Professor Oak's reputations. Giovanni is the head leader of Team Rocket and the gym leader of the Viridian City gym. Of course, being the head of a villainous incorporation, it would be no surprise that, if he was Ash's father, he would want to keep it hidden, like the rest of his life. Throughout the entire first season of the anime, any time Giovanni is shown, he is hidden in shadows, but when he is revealed, he is just this man. Of course, they did use the 'Evil Overlord is the Father' trope in the games, revealing that the rival character from Gold and Silver is actually his son, and they don't get along very well. There is a lead, however, when it comes to the American Pokemon Stage Musical. In the musical, it is revealed that Delilah and Giovanni once dated, when they were younger. It is also known that Delilah had Ash when she was eighteen years old. Perhaps she found out she was pregnant after they broke up, or perhaps Giovanni knew she was pregnant but wanted to keep it hidden because his occupation would endanger her and their son. Considering his mom is Madame Boss, Giovanni always knew that he would take over the Team Rocket Headquarters one day. Maybe that day came and Delilah refused to be with him any longer, and just wants to keep Ash from the burden of the truth. It would make sense, then, that he allows three of his agents to follow Ash around despite them losing every fight. He wants to keep an eye on his son and feel better knowing that his son is at least safe with three of his softest agents on his trail. Of course, this is only fan speculation, but it would make for a great reveal. They probably haven't even written him in yet. The producers of the show might just not know who Ash's father really is. They claimed in a commentary that there would be more information in season five, but they didn't hold to that promise. Of course, there are theories that perhaps Delilah was drunk, or maybe she just didn't know the father very well. There is also the theory that Ash's father just gets around. Of course, for a children's TV show, these probably wouldn't be the big reveal. If there even is a big reveal, that is.

What Makes for a Good Female Character in Anime?

What is it that makes some women better characters than others of their gender? Looking past the highly sexualised culture and industry of fanservice that is anime, this writer examines a sample of female characters who made a lasting impression on them.