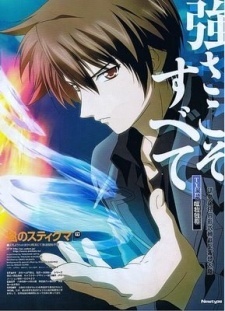 DivineTrinity Jul 24, 2019 6:55 PM
Yeah I had no choice since I didn't really like any of the alternate sites. When the site was down for who knows how long I just made sure to write what I completed.

belatkuro Jul 14, 2012 10:19 PM
Ohai.
Yeah, people nowadays really want to be spoonfed with details. Most of the things in the episode can be understood if you paid attention to the dialogues. Anything they don't understand, they call it a plothole. I really facepalm at times with the community nowadays. Ah well, we can't help it I guess.

BrandonFlowerz Jul 9, 2012 7:07 AM
Looks like your profile hasn't been updated in a while. How serious about Soul Calibur V are you? We should play! GT: vVAcid RainVv. Some more info on my page. Cheers!

We have a couple of new polls up now which we have the Character and Team of the Month for February 2012 which you can vote for by visiting the following links.

Character of the Month
http://myanimelist.net/forum/?topicid=383153

Team of the Month
http://myanimelist.net/forum/?topicid=383147

Also we started nominations to choose the best Naruto couples for Valentines day. To nominate your favorite couples please visit the following linK:

Newsletter Team – This is the area we need the most help. Job of being on the newsletter team is to send letters out to the members of the fan club. Were looking for at least 15 members or more to help us out with this task since sending letters to nearly 5000 members takes a long time for only one person alone.

Member Card Makers - If you have some graphic experience, we need your help with making Member ID Cards and sending them out to members that request for one.

Club Recruiters – Looking for a least a couple of members who are interested to help inviting members to the club that are interested in the Naruto series.

Again please PM me or one the other admins if you are interested in one of the positions above.

owell11 Jun 29, 2011 5:35 PM
fehfehfehfhe why dont u watch votoms and slayers you silly goose
All Comments