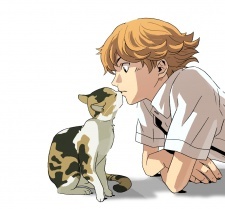 Valeria-chan May 19, 2016 12:12 AM
I can see the Mitani Yuuki but it doesnt look like Masaharu Miou to me but if u say it is then it is and it was the forum one that i was asking about but both works

i am referring to ur forum avatar can u plz tell me who it is?

If you wanna reply, just message me. I disabled my comments section

I see you like conan too, have you been keeping up on episodes?

Did you watch new prince of tennis?

link9us Mar 29, 2016 2:41 PM
Lets all hold hands, together we can DO THIS. Our light is brighter then anything and we will overcome the darkness. We can't stop now when we have come so far, lets all stand up.

lol trust me i know where your coming from.

lol this screams Fairy tail. Yeah i generally expect this when watching most shonen series and im quite used to it now as being a major trope of the genre, but fairy tail takes it to a whole new level.

Well where are you in the series currently? The arabasta arc starts on episode 92 to 130. It leads into a filler though that lasts bout 6 episodes, but its only the arc i know of that actually does this. Most arcs in one piece are either canon or filler, not a mix and match like naruto is.

link9us Mar 29, 2016 1:42 PM
One piece is at about the 72% mark right now, that means 28-30% left of the story. But you hear alot of fans say "This series is never ending, its just going to go on forever" well i can truly say to hell with all that because the story is heading towards what looks like the inclination of a "climax" approaching. Really the author is not playing around any more, its reached that stage where the story is moving ahead and many of the deeper mysteries and largest developments in the story are coming together.

So point being is now is a good as time as any to start watching :)

One of the things that you will probably enjoy bout the show, as you watch further and further, it starts to feel less episodic and more bout an overarching story line that ties everything together. It takes a while to get to that point, but eventually you will start seeing that. The early arcs focus on some pretty great characterization and development though. I usually tell people to watch at least till the alrong arc and focus on the characterization and if its something you don't like, then the series is probably not for you. Or you can watch the first large arc, the arabasta and get a true sense of one piece is really all bout.

If your a fan of shonen genre in general like naruto and fairy tail or Hxh, then i don't see why you would not gravitate towards this series.

link9us Mar 29, 2016 1:48 AM
Another one piece fan? Prepare your self, if your a fan of shonen, this is with out a doubt the greatest shonen series ever.

teajjeje May 12, 2015 12:00 PM
I love good comedy. It's definitely my favourite genre, whether in anime or film or drama or plain variety shows hahaa. Speaking of comedy, do check out Gintama if you ever have a lot of time on your hands :P

Atobe is so perfect and his thing with Tezuka like when he screamed Tezuka's name and Tezuka actually heard it asdgkljsd
Also his thing with Ryoma. Monkey King all the way

teajjeje May 11, 2015 10:43 PM
Season 2 was really surprisingly well done. I felt S1's Tokiya was a bit too dark and brooding but he lightened up for S2 and there was a lot more humour. That shounen glasses throwing scene during Natsuki's arc was such a highlight. Felt like a sports anime for a sec HAHAHA

I couldn't hold myself back after finishing season 2 with no more anime in sight for the time being, man. Sports == Cliffhangers Everywhere ;a; Actually when I was watching KnB I didn't notice how sexy his voice was (he wasn't my fav character so I didn't pay much attention woops), but he is Aomine. I was surprised when I found out after watching PoT and went to rewatch some clips of him, and he actually does sound like Atobe. =w= He's definitely cool though, and kind of a jerk, but so is Atobe lmao

Seee that's actually the main gripe I have with gates in basketball. With tennis, because while being a team game it's also very individual in a match, two players can activate their gates and play and it becomes a fair?? match where you get to see both players give there all, even though it's still really ridiculous. In basketball, basically only the aces can open the gates, and it quickly becomes ace vs ace with everyone else in the background so it loses some of the team aspect of it for me. it's not completely gamebreaking but it could have been done better.

Have you watched the 7 ep specials that take place right after ShinPoT TV anime yet? That was actually pretty good, way better than the Genius 10 ones ongoing right now. I'll try to find them again, hold on :D

teajjeje May 11, 2015 8:51 PM
Tbh i think the entire 3rd season so far has been a bit lackluster.. esp the ending song why the CG T____T i hope they fix it up for the final episode where they'll be incorporating it but they probably won't.. I'm hoping it'll pick up soon though. The Masato-Tokiya sub-cross-unit-thing ought to be good.

As for KnB, I haven't been following the 3rd season since I watched the first two and then read the manga all the way to the end, so.. I can say I did enjoy the first two seasons and the animation was pretty great. Lots of nice Production IG effects usage? If only Tenipuri was newer... And um you'll get to hear Atobe's voice. It's a nice voice ;u; I have to say that towards the end it got a bit carried away by the having 'gates' (like in PoT too) and it got ridiculous with gates and gates behind gates and gatekeepers but other than that it was fun? Hahahaa I guess it depends how much you've read of the manga, because the games do lose their intensity if you've read it beforehand. (Which is why I'm not watching the current season anymore)
All Comments