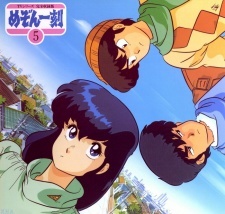 Xeu Jan 27, 2011 12:26 PM
That sucks about Yawara, I stumbled upon that one awhile back myself. Just the fact that it started in the late 80's for Urasawa has me pretty interested.

Still hoping for a 20th Century Boys anime. Reminds me I still need to get to Master Keaton sometime, lol.

Xeu Jan 20, 2011 2:06 PM
Yeah these last two years or so have been pretty terrible. These two have caught my eye though:

Is it nice I'm finally moving away from mecha? lol... more stuff to talk about now with you, Andrew, and others. It's like I've literally seen most of the mecha stuff out there. I think I can really get into sports anime, I love how they're so character focused and the sports elements I guess could be seen as a little action to spice things up.

Xeu Jan 18, 2011 12:03 PM
That sucks. Good money though? Also is your other job hiring at all? lol, I'm looking for full time now too, hope I can get something that pays decent.

Eve no Jikan looks cool, just downloaded that one a few days ago myself. Among tons of other stuff lol.

Xeu Jan 18, 2011 10:19 AM
It's basically a bad DBZ with 99% of the show being about fighting and no character development or adventure, the second arc is a 40-50 episode tournament that comes out of nowhere and goes on forever. The final fight on like 110 was worth it, but yeah not really recommended. People die and come back like nothing, has a Spirit Realm, etc, it really is a DBZ clone.

I think you'd like Dragon Ball or One Piece if you gave them a shot. I tend to enjoy shounen more like that stuff that have comedy/adventure thrown in.

I loved it, I think it was maybe actually a good thing to watch it so far apart from Maison for me. I can see why KOR might get brought up in Maison discussions but yeah I definitely liked it on its own right. It was definitely more episodic as you said though. I actually thought the first movie was the really depressing one. Another case of depicting younger people "growing up" and having to move on, Japan seems to be good at making that stuff depressing sometimes. From what I know the second movie was based off of novels that continued the anime line rather than the manga, pretty odd. It was a little off at first since it was from the late 90's, different character designs, etc, but it was cool and left a nicer taste in my mouth after watching the first movie. Much happier, lol.

Xeu Sep 25, 2010 8:26 PM
Ironically enough I've been watching Nobody's Boy Remi which sounds like what you just described. This is the second French novel based series I've seen directed by Dezaki (the other being Rose of Versailles) and again I'm just at a loss of words at how incredible this series is so far. It's adventurous and very somber, and uplifting when it needs to be. I definitely think it's something you'd probably enjoy along with RoV.

I'm definitely thinking Dezaki is one of my favorite directors. He also did Space Adventure Cobra which is nowhere near as deep as the other two shows mentioned, but yeah his directing style is so badass and excellent. I need to see everything he's touched!

I didn't know all that about Kemono, that's pretty awesome. I wonder if Moribito was longer in the novels though... I'm guessing so since the anime just kind of ended out of nowhere, but it was good stuff.

Xeu Aug 20, 2010 1:45 PM
How's Kemono? I've been wanting a good serious Production IG show since GITS and Moribito. I remember starting Sengoku Basara thinking I was in for some great adventurous historical feudal Japan series and got DBZ with swords.

Xeu Aug 14, 2010 2:30 AM
It was neat, though it's like an intro to the manga from what I've heard so I wouldn't expect too much. Created by the guy who worked with Tomino on L-Gaim, so I saw some similarities there, like lightsabers and the planet the OVA took place on was like Tatooine. The dudes character designs can be very questionable though (that's a guy). Lots of the classic voice actors in it though, Wakamoto played a funny drunken dude.

The manga really interests me though. I hear it spans over several thousands years and is really complex, I love the art as well so I'll probably get to it someday.

It was kind of a random watch though. I've had a ton of random OVA's downloaded for awhile, just trying to get through them all... someday I hope. lol