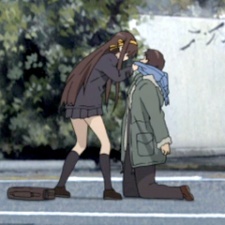 blob Nov 21, 2013 7:25 PM
I support you, my friend. I haven't read that book you guys have been talking about, but those three aren't looking at this from an overview and are too constrained in their being right to consider other options.

Hopefully Samurai Flamenco will keep being just as interesting! Great series so far.

pradarara Aug 29, 2013 8:39 PM
Yeah no problem. When I looked at your Gurren Lagann rating I just knew you would have liked it, and thanks!

5nanometers Aug 16, 2013 1:44 PM
When you say "tell me what to watch", I don't know if I could give you a proper answer, especially if you yourself don't know what you want to watch. So, I'm going to tell you what I think about titles in your ptw, only if I've watched them, of course.

Accel World (7) - think SAO or any MMORPG, but only less shitty. There's a lot of familiar seiyuu, and the music is well done. The plot will really frustrate you, but that's what makes it so great. Action. Maybe.

Aku no Hana (6) - I'm sure you've heard about this one. WHY is it even considered anime? I wouldn't normally recommend this one, but if you're into stories that require further analysis, you'll get a kick out of this. It's about a boy who feels like an outsider. Though I warn you, nothing much happens. No.

AnoHana (8) - AnoHana's about some delusional boy who mourns over the fact that his childhood friend died early in his life. Really, you'll only like it if you can relate to it. Similar to Clannad in a sense. The art is fine. Maybe.

Byousoku 5 Centimeter (9) - A masterpiece. Ever had someone you really, really loved, even when s/he's really far away? Yeah, well it's like that. The art is part of what makes it so special. The story moves really slow, as if it were a slice-of-life anime, but that's kind of what it is. YES.

Chuunibyou demo Koi ga Shitai! (9) or otherwise known as "Chu2koi". Man, I love this show. It's about a boy who used to have the disease "Chuunibyou" or rather, "8th grade syndrome". Remember how we used to think we had special powers as little kids? It's like that. I think we can /all/ relate to that. Read the synopsis if you want to read more. It's animated by KyoAni, so the art is top notch. Watch it in time for its film release this September! YES.

Denpa Onna to Seishun Otoko (6) - Yet ANOTHER slice-of-life/sci-fi animu from SHAFTTTTT. Really, nothing much to say. The art is fine. The denpa girl is insanely cute, but that's it. Slice of life. Maybe.

Hidan no Aria - I tried to watch this back when I first started watching anime. I couldn't. Too much boobs. EVERYWHERE (help!) It was something about going to an academy where you kill robots or something. I'm probably wrong. Proceed at your own risk.

Mirai Nikki Redial (7) - Why haven't you watched this? SERIOUSLY. Mirai Nikki's end was complete shit. THIS, this is what we wanted to see. It's only about half an hour, so definitely watch this when you get the chance. YES.

Mondaiji-tachi ga Isekai kara Kuru Sou Desu yo? (7) - This one isn't for everyone. If you like explosions and lots of fanservice, watch it. Maybe.

Sankarea (6) - Zombie fetish. Do you have a zombie fetish? Do you want to see a "normal" teenage boy try to deal with a seemingly normal girl who's called a zombie? If you answered yes, by all means give it a go, but I do not recommend this one. Maybe.

Shakugan no Shana - no

Toradora! (9) - YES. I love this show. It's animated by JC Staff, and it's cute as hell. Think about a delinquent boy and a seemingly always-angry girl. Now add two other characters with traits that reflect off one another. Okay, now add some love. Oh! You did it wrong! Now you have a love triangle! Definitely recommend this, but save it for winter. Trust me, you'll it. YES.

Other titles I recommend are Nichijou and Kotonoha no Niwa. If you have any questions, or if you want a more in-depth explanation, just ask. Cheers!

symbv Jul 12, 2013 8:50 AM
As far as I know, there are 3 main routes in the VN: Saber route, Rin route and Sakura route with names as Saber, Unlimited Blade Works and Heaven's Feel respectively. There is also an additional ending for the later supplement Réalta Nua apparently. But I don't know how the original anime is linked to those routes, and if there are other, more minor, routes in the VN.

symbv Jul 12, 2013 8:45 AM
My understanding is the TV is Saber route (plus some elements from other route) while the movie UBW is Rin route, but I am not too sure.

symbv Jul 12, 2013 8:43 AM
I have one question: In the original Fate/Stay Night anime, which route was animated? Fans from the event saw the PV for the new F/SN and said they think it will be Heaven's Feel / Sakura route.