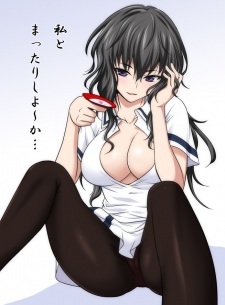 VaisuKaguya Dec 19, 2017 11:48 AM
Mine isn't that great either but I still enjoyed the hell out of it haha. By far my favorite Kiseki. Whatever you do def look forward to it, it's pretty amazing.

VaisuKaguya Nov 20, 2017 1:17 PM
Excellent 👌
Even after already playing them all myself I keep getting reasons to buy/play them again. Like I played the vanilla Sora games and then got the Evo versions or how I'll have gotten Sen 1+2 three different times with the Vita, PC and soon PS4 versions, etc.

Yeah, I remember reading how many people felt insulted by this game being the NA/EU exclusive title, while Japan got both Re:Digitize and Cyber Sleuth in the meantime. I can honestly see why, good thing that Namco has finally decided to pull their heads out of their asses and give us the other games as well instead of giving us trash like this and expecting people to buy lots of copies so they could deem the Western release of the better games worthwhile. I just want to scratch All-Star Rumble off my backlog, even if the Platinum takes over 100 hours to get because of the unnecessary grinding. Not looking forward to that, without a single doubt. As for Zestiria, I don't mind the combat being slower, I just hope that the story and characters aren't as stupid as they were in Graces. I definitely am not expecting to like it as much as I liked Xillia 1, but as long as it's playable, I should be fine, I guess. I'm definitely not going to buy Alisha's DLC, it's way too expensive - over 40 PLN for a single DLC? And you guys telling me that I can get Evangelion costume bundle for another 42 PLN as well? Holy shit Namco, you've gone insane.

VincentHarkonnen Jan 29, 2017 9:26 AM
Majikoi? Well, now that's something you don't see on people's avatars often. *laughs* Talk about a blast from the past.

By the way, I'll probably get Digimon All-Star Rumble this week, given that it's currently avaible for a discount. Too bad that it's the only PS3 Digimon game, because I'd honestly prefer an RPG over this, but I need my Digimon fix already. I'm pretty much set on buying Wolfenstein: The New Order and the "amazing" Godzilla game as well, with Tales of Zestiria being a title I'm thinking of, but given that every single one of my friends dropped it, I'll probably pass on this one.