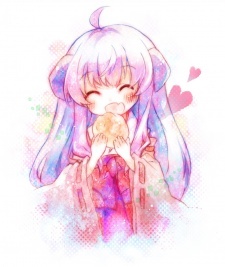 Hiya, it's been a while. I hope you've been doing well!

Nyron May 17, 2011 12:54 AM
How come you never post anymore? I miss those pretentious fences of text between you and those other guys

hoopla! its been about half a year since i was last one MAL! the path of a programmer is difficult an bloody...

Hopefully im here to stay for a good long time. So have you watched anything from the previous season?

Yosuga no Sora was not as good as an anime, the game did a much better job at portraying delicious twincest. Ore no Imouto wasn't bad as something to brighten up my week.

Gaidai Dec 9, 2010 6:24 AM
Heya. So far, I would say that it seems like Yosuga isn't going to go the Yandere route. The VN does say there's a "yandere heroine", but I'm getting the idea that the anime only has enough running time to focus on the various good endings with each girl. I keep thinking it's going to happen around every corner, and....it doesn't. Either they're waiting for just the right time to spring it, or the yandere aspect is just one of the bad endings they've chosen not to include in the anime. Don't know for sure yet.

See, I'm with you on the idea of a yandere character having some sort of "tell", if you examine them close enough. In Yosuga, the student council president, a girl named Kozue, would be my first choice for Yandere. I'm told by people who've played the VN that she's not enough of a key character for that, and I've been asked why I would deviate from the more "main" characters. I say it's because all of the main characters have a sort of high school romantic love for the leading man. This girl just...shows up early in the series, already completely infatuated with the leading man, and then she's conveniently thrown off to the sidelines, as if we're to forget she exists so the writers can attack us with her later. Her interest in him isn't just simple romance -- it seems to border on obsession. Those I think, are the types of characters likely to go that far, as far as disposition, and plot positioning.

Ironic, as I just started Planetarian maybe a week ago. I haven't gotten a chance to get back to it as I've been distracted by a yuri VN called Sono Hanabira...something something (forgot), and the anime Mitsudomoe. I have to say, Mitsudomoe surprised me. It's a slice of life middle school comedy. In and of itself, nothing exciting sounds like it resides there, but seriously....the comedy is fantastic. Yeah yeah, so many anime out there have comedy, but I'm constantly in stitches watching this show, and the main characters are triplet girls that are sooooo cute. I'm hooked ;)

Have you tried out the anime Yasuga no Sora, at all? I think this one bears closer review than I'd originally considered. It's only up to #4. At first, I was assuming it was going to be a lot like To Heart -- small town romance between a lot of girls that are all interested in a sweet, gentle guy who doesn't realize how attractive he is with his kindness.

Then, he started moving outside the stereotype. By the third episode, he's already beginning to act in a way that worried me enough to check out the vndb.org entry for this title. Sure enough, there sat the flag "Yandere Heroine".

You can't have a Yandere if somebody doesn't die, right? Then again, that wasn't one of the primary tags, so maybe that only happens if you reach a "bad end". Makoto Ito certainly reached a bad end. What, I wonder, will happen to this guy?

Aleaxyn Sep 25, 2010 8:16 PM
My target designator recently notified me that a massive quamtum singularity known as "Gaussian Myles" has begun its descent toward your position geocentriclly at a terminal rate of "almost there". Now that I have informed the Lord Marshal, I shall now commit dishonorable suicide by means of swallowing copies of Wuthering Heights until my body realizes that it cannot handle horrid literature of that magnitude.

YamateRailgun Sep 15, 2010 4:52 PM
Don't get me wrong, we greatly appreciate the services you provide to us. We just believe that you don't have the right set of skills to be raised to that position. However, I'm sure if you check the rest of the job openings on the higher level, you'll be able to find something better suited to your skill set.

Now, am I supposed to hit you with it, or the two peasants?

You could say that again. Settling lawsuits are always an annoyance. It usually requires settling it out of court. With money or bloodshed. Or both.

It was a nice day out that day. It's better to have gym outside when you can. :)
Hm, I suppose so.

YamateRailgun Sep 10, 2010 7:36 PM
Indeed. It is most unfortunate that you could not be promoted. However, other candidates just seemed better for the job of "Trained Sea Slug". You are welcome to apply again, when we are accepting applications.

Well, I suppose we'll find out if I can do it or not soon enough, now won't we?

Hm, okay then. You just saved us several million dollars. I shall use that funding for build other projects.

Eh, maybe. But the way I told you is how I thought of it. And with the graduation ceremony, that's probably because that area wasn't used to much, or something... That's probably why it was used as the entrance to the Guild. And lol, that would be an odd sequel. An OVA telling us how everyone that "graduated" from the school ended up would be pretty cool, though.