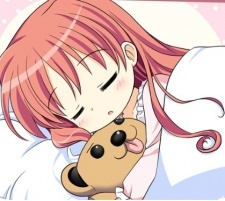 masterhoopla Dec 27, 2010 11:08 PM
Hello, Merry Christmas+++, and welcome back. The path of a programmer is also full of plenty of donuts, Mountain Dew, and sleepless nights.

I've watched a lot from the past season. Notably OreImo, Index II, Sora no Otoshimono Forte, MM!, Panty&Stocking, Motto To Love Ru, and Ika Musume. It's been quite a full load so I'll probably cut back next season. I haven't watched the final episode of Ore no Imouto yet so I'm still waiting to get my Kirino and Kuroneko fix in. There have been a lot of fun moments this past season.

So how have you been this holiday?

Gaidai Dec 24, 2010 6:53 PM
Well, I haven't really had the time to maintain the Ward, so it appears the fanbase has largely gone quiet. I suppose it had to happen at some point. It's still there though, so don't be a stranger, heh.

Good to hear from you. I don't really keep up with anime 'lineups', but recently I've watched Mitsudomoe and Yosuga no Sora. Loved them both. Good stories with memorable characters, at least for me. I'll digress on details for now, as it's Christmas Eve ^^:

It's good to see you back. C:
So yeah I haven't been watching that many things lately, I actually have to catch up on so many things as well, duh. But I'm as lazy as ever ahahaha.

What are you gonna watch? Ore no Imouto? :>

LovelongSought Aug 9, 2010 12:45 PM
Yeah I remember now because I was the one who claimed her in the spring

I have to place claims now or you'll beat me everywhere

But yeah, as for summer 2010 I guess I'll go with Highschool of the Dead (I LOVE zombies), Kuroshitsuji 2, Shiki, Occult Accademy, Sengoku Basara 2 and yeah Ookami-san but I guess I'll drop last oner because it's really lame and typical J.C. Staff nothing new. How about you?

Summer season begins next week. It came so soon.

That ending! What happened to my TK Beats? Why did they stop dancing?
Episode 13 was great and also wtf? It had a good setting, ambience, music and visual quality were top-notch. However, too many people disappeared between 12 and 13. They don't all need disappearance scenes, but I'd like at least some confirmation that they fulfilled their regrets and disappeared in the usual fashion rather than being eaten by shadows or disintegrating as a result of the world blowing up or some other strange event. I mean, with that many people disappearing at once, you can't help but think that there's some unseen force at work. Also, love.
When Yuri took down the system in episode 12, did all the NPCs die? The setting for graduation was unusually empty, and all the other cast had gone away. However, I'm bugged by the fact that there were a bunch of kids playing soccer or something in the background. Perhaps the NPCs didn't die, but then why were there none in the school or at the graduation? I want answers.