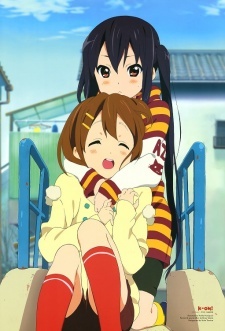 chirale Jun 29, 2013 12:01 PM
Hi code537. I've seen you have Canaan in your favorites. Would you like to join PA Works club to celebrate the studio behind this title?

Ctrl+F to find your card.

tehnominator Aug 14, 2011 2:13 PM
I'm really sad that Octave and Girl Friends ended. I feel like I only have Sasameki Koto and Aoi Hana left to look forward to and I'm not even that interested in SK any more.

And Morinaga's revival of Nana and Hitomi can't come any faster ;_;

tehnominator Aug 9, 2011 3:20 AM
Ah, I see. I hope K-ON might restore some good cheer to people; it was kind of really famous to the point that it was on regular mini-marts stores promoting them.

tehnominator Aug 4, 2011 2:54 AM
Haha, Funi's bonus contents are a LOT better than say Geneon who basically thought that trailers were a good enough bonus. But I love their cast commentaries and outtakes which are always funny. I am holding out that they continue making great dubs, but they need some new blood in their ranks, younger especially.

I don't know why people so hate Gonzo, herd hate, probably, but they've made, like most other studios, brilliant anime and their stinkers.

tehnominator Aug 2, 2011 3:08 AM
I don't know how we weren't friends here either-- how did I notice? I think I suddenly watched under your profile pic and saw "Send FR" and I thought, "Wait, we weren't already??"

QB was like sex to your ears, btw :D

tehnominator Aug 1, 2011 4:36 PM
Haha, you sure spent a lot of time on this series afterwards. I felt like my head was reeling after finishing it, and I definitely cried during the last episode when you realise what was going on.

As for the body types, I can appreciate the look on older women. I mean, not everyone is a stick, and I guess that's why I liked Queen's Blade too because everyone was a big-boobied, big-bummed, voluptuous goddess with reasonable proportions (somewhat, lol). And I think everyone was over the age of 18, hurrah!

I dislike whenever anyone asks me what anime character I think is hot because I usually have to say "None" considering that even though they are pictures and fictional, I am not attracted to teenagers on the whole. The hottest anime character for me anyway is Panty from Panty and Stocking :P And it's so funny-- she dresses like a stripper and I can't even be bothered even though I tend to like... clothed women.

I keep telling people not to misjudge that series because of the ridiculous service-y get-up. It was simply one of the most powerful stories of parental affection I've seen in anime and just because it wasn't made by KyoAni, is about a mother in particular (people always seem to go gaga when a dad is somehow fatherly; it's like society doesn't expect men to care about their children), and has enough fanservice in it to rival other grosser series. If they ditched the service, the series might have been even more excellent.

tehnominator Jul 24, 2011 4:22 AM
I've been meaning to watch that, I simply lack so much energy and interest for anime lately. I don't know why. Maybe I'm burned out? On life, maybe :P