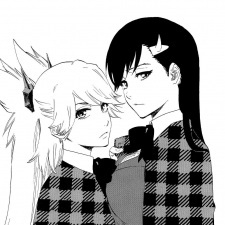 ErikaFurudo Sep 22, 6:51 PM
Oh yeah Jujutsu Kaisen is on my watch list too! If you say the manga is good I’ll definitely give it a watch. 🥳 Higurashi is good but if you’re squeamish some of the scenes are beyond brutal... there is more to the story than some of those scenes so we’ll see if they do it better or worse in the reboot. I thought Demon Slayer was good but I didn’t really care for the comedy in it, I think there was too much of that in some scenes and not enough plot. I think it will get better as it goes on hopefully as I feel like I was waiting for something really big to happen and nothing really happened. Hopefully the movie will follow on from that and give me a bit more action. ✌🏻✌🏻

ErikaFurudo Sep 22, 5:35 PM
I know I keep on finding myself coming on here for 5 minutes and then ending up getting stuck on the forum games page for half an hour. 😂 It reminds me of going to chat rooms etc back in like 2007/2008 lol. Ooo good question, really looking forward to the Higurashi reboot, Akudama Drive looks good and I want to watch the Demon Slayer movie when it comes out next month also as I just finished the series last week! What about you ? :)

ErikaFurudo Sep 22, 4:52 PM
Yeah I’ve always religiously used this site to lurk the anime boards for whatever series I’m watching and to update my list but I’ve rarely posted on forums. Hopefully I’m here to stay for now because I’m quite enjoying taking to random people. It’s fun. 😇

ErikaFurudo Sep 22, 4:19 PM
I know I’ve used this site for soooo long too but I’ve never had the confidence to post on forums or chat to people. 😬 Crazy to think we’ve been on here for ten years plus. 😧

Lria Aug 23, 1:27 PM
YOU'VE TO WATCH IT!!!! mhm mhm... I'm so excited and one of the main reasons why I decided to start watching it now is because the 4th season's poster looks STUNNING! it's rare to find an anime with no fillers + good story + amazing art, so I really recommend it but it's not for the faint-hearted people x3

Lria Aug 23, 11:00 AM
AoT <3 I couldn't watch it because of uni but thanks to corona I can watch all the seasons now before the release of the final season :3

-Rica- Jul 28, 8:01 PM
Good question! I think America is very influential in terms of its culture. I tend to find that whatever I see in America, politically or socially or culturally, tends to appear in my country a couple of years later. This pretty unfortunate political polarization has appeared here too now, but it's still not quite as mainstream and I think the backlash against it will happen quicker. So I think people are a bit more reasonable here, but it's probably more like it's America but in fast-forward? It tends to depend on who you hang out with, too. I find that gay men for example tend to be the group where I find the most individuals who are reasonable. But there are great people in every group if you keep looking. ^^

Peaceful_Critic Jul 28, 3:24 PM
Why is brotherhood more conclusive to you?

Tbh, I haven't seen the reboot. I only know the original 2001 version.

Peaceful_Critic Jul 28, 2:28 PM
It's interesting you use your favorites that way. I don't have any uses that my favorites are used for(any one of my favorites could be replaced) for nor do I place them on there because of impact. I think it's pretty unique you do so.

I used to when I had SAO in my favorites, but I don't see that treatment anymore. The series on my list are pretty critically acclaimed now(i.e death note or angel beats) and the ones that aren't are lesser-known stuff that has a mostly fanbase that loves it(i.e Princess Tutu or Anne). I can't imagine my opinion being dismissed based on any of my current favorites. Though, I did have someone unfriend me and block me for having Twilight from MLP as one of my favorite characters.

Which FMA did you prefer?

Peaceful_Critic Jul 28, 1:00 PM
I can understand that. If you are scoring something you have to think through as to why it deserves this score or why it is comparable to this anime in terms of quality. And that may lead to doubts about how you have scored the anime, so you might triple check it to make sure you scored the thing correctly.
I also understand, not wanting to be dismissed based on scores. Do you ever experience the same treatment for your favorite shows? Like has anyone ever said: "ha, you like Diana from Seven Deadly Sins, you must have garbage taste in characters" ?

Watame Jul 28, 12:25 PM
If only all reviews on MAL were like yours.
All Comments