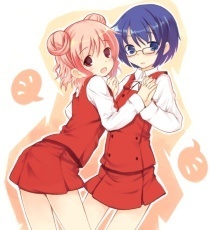 Faeron Apr 19, 7:03 PM
Wow, you hate "Umineko no Naku Koro ni" almost as much as I hate "Monster" hahaha xD Am curious, was it really that bad? Looking back now from when you watched it/wrote the review I mean.

mmstick Mar 11, 2018 12:58 PM
Yeah, the Umineko TV series was pretty bad. DEEN already crammed each Higurashi chapter into 4 clausterphobic episodes, and then they tried to do the same to Umineko, despite having 4x as much content per VN episode. It's like trying go through the entire Higurashi story with only 8 episodes. Much of the critical plot was left out, or otherwise simplified to the point of being a cheap parody. The music was also dull in comparison to the VN.

Dreadogastus_F Jul 16, 2017 9:41 PM
Thanks for the Battle Athletes review. I checked out the first ep. and was wondering whether to continue. Based on your review, I will continue.

Marooya Jun 28, 2017 5:38 PM
Hello :)
I've just read your review on Fate Stay Night and I must say I completely agree! I couldn't have said it better myself. Very well written and constructed review, thank you.
All Comments