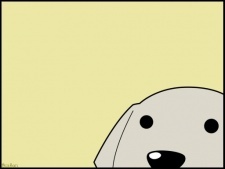 Don't know when your birthday actually is but I've resurrected two lost members in the last week doing this, so I'm just going for a hat trick.

I hope you come back some day.

HikaruIzumi, our new card maker, deserves the real thanks for the card. I just had her do all the work.

No major events planned for the immediate future, the last one really took it out of me but I was pretty proud of how it all turned out. I am working on something related for it right now, a voter registration system, you can read about it here. If you can believe it, we actually had people cheating on this thing, so unfortunately this might be a reality in the future but if it does, I'm going to make it as simple as I can.

The Non-Canon tournament was very popular with everyone though and the over whelming majority of people have voted to have another tournament of the same theme some time down the road, so it's definitely a topic we'll do again. I think there would be enough top tier couples who weren't even nominated to make up a whole second tournament.

If you wanted to get caught up on something, I would suggest Akuma no Riddle. It's been pretty interesting and it's only 3 episodes in, so you could get in on the live chat thread. You'll want to go with Kaitou or RandomRemux subs (I'm watching RandomRemux, Kaitou is more popular though). We had a scary situation where it looked like nobody was going to sub the show (competently) the first week but these two picked up the slack.

I'm thinking about shaking up the Spotlight format but I'm not sure how I want to do it yet, I'm just not quite happy with the way it is right now. So I'm not sure what I'm going to do about that segment for next month but I do want to do more live threads like the Saki, Sakura Trick and AnR ones from here on. At least one a season. Another show you might not have seen is Inugami-san to Nekoyama-san. It's a 3 minute short airing on Thursdays, very Yuri but I don't know much else about it.

I hope you can get back into things now too, we've had a lot of cool new members in the club but it's not the same without all the old good ones too. I felt bad that there were people missing out on things too.

I'm in a pretty good place right now. It's been a bit up and down but I've had at least a few stable weeks. Not much to say without digging up the past and right now I'm over all that, too much to look forward to right now.

Vilaplamas Apr 17, 2014 5:47 PM
We have a new card maker in the club and to commemorate winners of old contest, you've gotten a unique one from a set of 4.

Vilaplamas Jan 5, 2014 5:55 AM
Ah, I hate to hear that. Holiday stress is the worst. My days are just getting normalized her too.

Vilaplamas Nov 5, 2013 3:27 AM
Well, they could at least finish Legends and ZX with a third installment. that wraps up the story.

It is but it's not as if they didn't milk it dry when it was alive and Capcom makes me so mad these days I'm kind of glad they're not going to ruin it further. They would sell E-Tank DLC eventually.

But! have you seen Keiji Inafune's Mighty No. 9? It looks very promising to me.

And it's a bit older but the fan made Rokko Chan is a must play if you haven't already. It's an excellent inspired take on the NES originals but it has the far superior dash from the X series instead of slide. Even the soundtrack has the right feel. Plus you get to play as a cute MegaGirl. I'd honestly put it above a lot of the real games.

And regarding Vividred Operation: how is your first impression of the series?

Enjoyable enough, fun enough but not the least bit ambitious to do anything not by the numbers. Presentation is used to cover up lazy writing. More jokes fall very flat than not. Wish it were a Megaman game.

Vilaplamas Nov 2, 2013 7:08 AM
I played the first ZX a long time ago, I was actually going to make a bunch of comparisons to Vividred Operation. They're not really story spoilers but maybe mechanic spoilers if you're interested

Vivid Blue/Model LX (there's more convincing pictures out there of this one but I couldn't find it at the moment, where they're holding that trident the same way she's holding the hammer)

I've only played a little bit of the first Zero game and it didn't really wow me. X1 and X2 are two of my all time favorite games. 3 is a little bit of a mess, 4 is an improvement. 5 was conceptually interesting, at least. After that, I think it moves much more into the suffering category.

Vilaplamas Nov 2, 2013 5:11 AM
Are you familiar with the Megaman ZX series of games for the Nintendo DS?

Kind of brutal, but it wouldn't be Sasameki Koto if it didn't test our patience, would it?

Vilaplamas Oct 17, 2013 7:53 AM
It is indeed, still a great price. Slightly less than what I paid for each half of Girl Friends at nearly the same page count.

I sent a email to the publisher anyway, hoping they can provide me with some more info.
All Comments