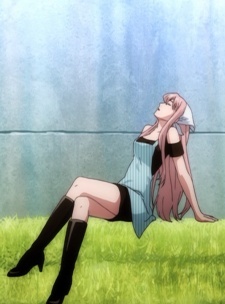 glassyeyes May 10, 2021 3:38 PM
Fair enough, you probably don't remember and the sources from then are probably dead now. It seems so cool, I'll just have to wait for someone to reupload.

Thanks for those recommendations by the way. :3
YAy for ending everything with an emoootttee. I'm so tired. e_e

ADayWithoutMe May 6, 2015 1:51 AM
I feel honored that you feel so honored to share anime taste with me.

ADayWithoutMe Apr 16, 2015 2:20 AM
Congrats, you are my MAL friend who has the highest compatibility with me. Sugoi to the max.

PleiadesRising Nov 22, 2014 9:29 PM
Even those little details in production made it better, like how Roboko would make a sound like a dial-up modem, haha. I want to watch the OVA, in which they form...an idol group!

PleiadesRising Nov 20, 2014 9:17 PM
May the Light of Zvezda shine throughout this world! Yeah, it is. What did you make of it? I liked how it gradually turned slightly more bizarre with each episode. I now have another reason to never smoke: it'll leave me soulless.