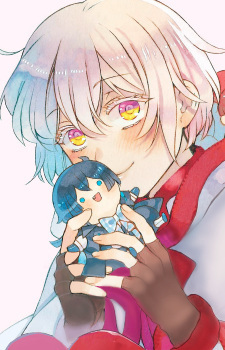 ac_eren Oct 17, 2019 2:57 AM
I buy a book but a grammar book (Shinkanzen Master) I already have PDF of Genki but it looks boring to me so I used apps and watch video instead.
Try this site https://www.aozora.gr.jp/ there's many novel there.. The popular novel I know is from みやざわ けんじ. You know him? Try to read this - http://aozora.binb.jp/reader/main.html?cid=43737 (Night on the Galactic Railway) classic novel. I haven't read it yet but I'm planning to.
and also The Tale of Genji - https://www.aozora.gr.jp/index_pages/person52.html

ac_eren Sep 30, 2019 5:32 PM
ah, I Want to Eat Your Pancreas? is it good? I haven't seen the movie of it.. it seems heavy drama.
Hmmm I don't know if you can call it study because I don't do proper study (?) or use proper books to learn, I'm just self study and used apps :D
you go to language school for it?

YukiChan3 Feb 8, 2018 12:11 PM
Oh, yeah! I have a link on Mega with a lot of books to study Japanese that I've downloaded.
Try to download it and take a look! There are a lot of parts and it may take a while to download all of them., but I'm sure it'll be helpful.
https://mega.nz/#F!kohGjRBT!x3F5zhR2vyheNiFGLmd8Hw

As you can see in my profile, I study Japanese at university, so uh, I'm always studying Japanese hahah So yeah, I think you can say I'm studying N2

marna Dec 22, 2017 3:32 PM
Hello there Haya senpai!! This is a 4 years and a half late reply lol sorry I was away... I'm not into anime/manga again now (I'm into another fandom that is kpop) but I'm taking recommendations to watch for this holiday! What's your recent favorite anime?

NemuriNezumi Jun 9, 2016 8:42 AM
guess who has graduated and has no more homeworks to do?? I would say no more exams too, but that wouldn't be true, as I'm going to try to earn university credits by doing alternative exams

apart from that uwah, such bad months... one of my two cats has been severly ill since the end of the year (and he needs constant attention because he wouldn't even eat alone) and well... it has only been getting worse and worse and worse, there was a point the vet thought he had a chance to survive but it got so much worse...I'm not sure he will last another month tbh...my poor little boy, I had him for almost 9-10 years :c (and what is probably worse.... it is contagious and I have another cat, so as you can imagine, I'm really worried about her as we can't separate them even if we wanted to....this is so stressfull, I'm starting to have a rather worrisome insomnia issue even)

but yeah, apart from that I guess things are doing okay? I mean, not everything is going bad, is just the thing with my cats which is taking quite the toll on me

and now replying.... see?? told ya! albeit a bit late, congratulation gurl! xD are you expecting a baby boy or baby girl? (or you don't know yet?)
I added you when I saw your request, wanted to reply but wasn't really feeling like socializing with all that was happening at that time, sorry :c (and then after that it felt it was too late to reply and I had to take care of my final project orz)
as you may have noted, apart from the occasional favorite videos that were published automatically (because my twitter is linked to my Youtube account) I'm not really active on twitter, the fact that we can't write a lot just makes me unable to enjoy using twitter (I created an account because a friend had one and he told me it was cool...not really my thing tho)

jap news well.... I almost finished the whole first season of BroCon novels like two months ago xD (after the first volume I started buying them one after another -from 2 to 4 volumes at a time-, up to the point I bought the whole first season), I only need to finish reading 1 and half books :x (but the whole Tsubaki and Azusa drama/dilemma annoyed me so much that now I can't find the strenght to finish it, ugh D: I hate Tsubaki so much, I can't stand him and the mere idea to read about him again pisses me off so much you have no idea... the hate is real xD)
so I thought about stopping Brother Conflict for a bit and I'll start buying Ao Haru ride novels instead (there's like 6 novels, not sure if the series is finished or not like the manga tho) and the Joker Game novels.... JG has become my new obsesion, since the beginning of the season I have been dying to buy and read the novels (given the context it's probably gonna be quite the difficult read because of the vocabulary from WWII/military/spy stuff like that but heck I don't care, I need to read them, I.need.it....!!!)

I think I know what code:realice is but tbh I have never played it and if it is what I think it is I'm not interested in the slightest, ain't gonna lie xD
you mean that blondie one with what seems to be two clips for the hair which look like cat ears?? (I'm not into long haired guys so to me long haired charas are a huge nope nope, quite the turn off tbh xD)

you gotta keep practising, it's the key of success(?), I'm sure you will be able to do it, believe in yourself :D I mean, if I -of all people- could do it you for sure will too

welp, I have really good news about that... my parents told me they will pay for chinese and german classes when the autumn season start! yeeyy :D (now they somehow understand the importance of asian languages, hence why they're more than ok with also chinese now!) when you add the fact that I will also learn finnish, swedish and probably some russian when I'll be in Finland for three years I feel kind of OP lol :B

in any case, apart from the occasional times when I'll have to go to Geneve for those exams (and when I have to study for those), I'm totally free~
oh freedom, how I missed ya'!
I'll probably start drawing again now that I got time xD

PD: yes, you can be a mom who watches anime (you can always introduce to your kid/kiddos some cute animes movies like totoro, sprited away, etc, they'll probably really like it, even if it's only for the visuals!)