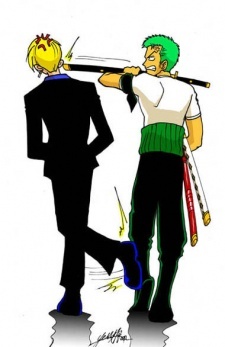 UnwantedLoli May 15, 8:24 PM
Really? I would think the manga would be harder to keep up with, but I guess I havent ever really attempted to find chapters of a Shounen manga online before. I always thought it would be too hard to find all of it lol. I do want to start reading some manga so maybe I’ll look into it. It’s sad to hear that One Piece’s quality has gone down, at least it’s not as bad as EVERY Black Clover episode.

Yeah I can kinda relate to that with Tower of God since I read the Webtoon before. I was estatic when watching the first two episodes since I was really happy to see it animated, but after that its gotten a little boring since I know what’s gonna happen. When it gets to the more intense fights I’ll probably gain more interest though. Oh, just a quick question if you don’t mind, where is the Haikyuu manga at in the story right now? I don’t need anything specific, just wondering if they are still in high school or graduated already.

I found it impressive that One Piece has been constantly airing since 1999. But like you said, there can be a lot of downsides to that as well haha. If it did the season format and only released a select number of episodes a year like My Hero Academia I think the quality would definitely rise. The number of fillers would also decrease, but I enjoy most of them anyway so I don’t mind too much. However, I think the number of episodes in One Piece would be way lower if it did do seasons; which could be a good thing or bad thing. Depends how you look at it :/

Ah thanks for replying! Don’t worry, I made a wordy response too xd

Maxine May 15, 11:27 AM
Updated my episodes watched on One Piece because I realized just how inaccurate it was, oops -- I watched through until after the timeskip back in the day, it wasn't until Fishman Island really that I started falling off...I think. I know I wasn't really interested in a lot of the Luffy only stuff before the timeskip, but I think I watched most of it. I will say that from Fishman Island and beyond, I definitely have not seen every episode. I jumped around, only tuned in sometimes (Fishman Island was not my favorite arc), and didn't really pay much attention again until Punk Hazard. But even Punk Hazard I didn't watch everything, so.

I did always mean to go back and watch the Sanji backstory / Big Mom stuff, so maybe I'll get around to that one day.

Maxine May 14, 9:40 PM
Just realized my reply to the comment below won't show up on my own page lol, so for those wondering why I'm not caught up on the One Piece anime or if I prefer the manga to the anime, this is what I said:

I do prefer the manga -- much more so, in fact. It's easier for me to keep up with, for one, but I also feel that the quality of the anime has dropped over the years.

But also, and this happens to me with a lot of series, I often find that if I start with the anime and then switch over to the manga once I've finished whatever episodes are available, then I automatically become less excited about the anime. Because the manga is always ahead, right? So I'm more interested and excited to see what's coming, rather than watching anything where I already know what's going to happen. If that makes sense. Don't get me wrong, sometimes stuff happens in manga that I'm like "oh shit I can't WAIT to see this animated!!" or for things like fights in One Piece or My Hero Academia, or the volleyball matches in Haikyuu, it might be easier to follow what's happening once it's animated, so I look forward to that. But in general, once I switch over to manga, it ends up being my preference.

Honestly, the problem with One Piece is that it's ALWAYS running. It's a long running series, like Naruto or Bleach or whatever, and when they have to have a new episode to air every single week then inevitably they have to drag it out. They have to add filler or include less actual content in every episode, and god forbid you run into those situations where you catch up to the manga completely and then have to veer off into an entirely different plot (One Piece will probably never have this problem THANK GOODNESS).

Nowadays it seems more common to break things up into seasons -- not that I have any proof if that's true or not. But for example My Hero Academia only airs like 20-something episodes per year. That gives the manga more time to tell its story and you don't have to worry about the anime catching up or needing to fill time with filler. I definitely prefer that format.

Anyway, that got wordy lol. Apparently you're the one lucky person who gets a reply out of me, so maybe others who have asked why I haven't kept up with the anime will see this. But I still love One Piece and always will!! It has such a stellar voice cast and those first 400 episodes or so will always have a special place in my heart.

UnwantedLoli May 13, 10:32 PM
I just read your One Piece review and noticed I’m on the EXACT same episode as you were when you wrote it xd, kinda creeped out. Good review though!

Also, I noticed you’re caught up with the manga and not the anime, do you just prefer the manga more?

Happy Birthday Maxine I hope your day was filled with thrills, chills and hopefully some relaxation XD but seriously I hope you are well and that you and your family are staying safe, healthy and in high spirits ^-^

Buttershooter Feb 9, 4:30 PM
Moment of silence for the one piece anime

myaanimelist Oct 19, 2019 5:51 AM
your name reminded me of max from LiS https://life-is-strange.fandom.com/wiki/Max_Caulfield haha
also still keeping up with one piece? i haven't seen it for an year now, i was sick of waiting for new episodes so now i can binge.
All Comments