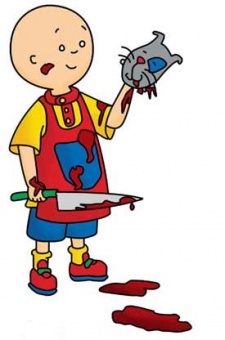 NeinGesicht Aug 6, 2014 4:31 PM
I'm just a kid who's four,
Each day I grow some more!
I like exploring, I'm Caillou
So many things to do,
Each day there's something new
I'll share them with you
I'm Caillou
My world is turning, changing each day!
With mommy and daddy and finding my way-
Growing up is not so tough
Except when I've had enough
But there's lots of fun stuff
I'm Caillou, Caillou, Caillou...

Kapodaco Jan 14, 2014 8:04 PM
Thanks a bunch! I appreciate the compliment, and enjoy Onidere! I thought it was quite the read, despite its flaws.

McRib Dec 21, 2013 2:40 PM
If you enjoyed that one, stay tuned for my Walkure Romanze review which will be finished shortly after the last episode is subbed.

"Classy" eroge adaptions are the best to review after all.

Angeldust7 Oct 1, 2013 8:45 PM
Eva 3.0 came out after Rahxephon, and the scenario presented in 3.33 is very similar to the scenario presented in Rahxephon. No one trusts Ayato Kamina, they think he's some sort of alien freak (and to some extent, he is). In Eva 3.33, everyone treats Shinji as a threat against their well-being, rather than a fellow human (and to some extent, he is). Also, RahXephon is not a ripoff of Evangelion. RahXephon borrows from Pre-Columbian American Culture while Evangelion uses Christian Iconography, and the characters and plot of both are vastly different. If you want a REAL ripoff of Evangelion, then I suggest you watch Pacific Rim.

RediceRyan May 15, 2013 11:22 AM
Go back and give ratings to all the anime you watched. Even if you just use this site to keep track of the anime and mange you watch and read.
All Comments