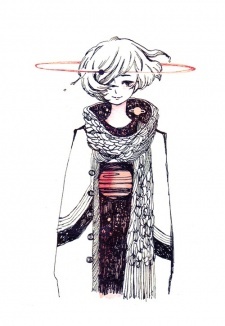 SheasonDuerulo Oct 1, 2016 5:24 PM
HELLO STOP IT'S BEEN A LONG TIME STOP I HAVE COME BACK FROM THE DEAD AS A REAL GHOST THIS TIME STOP LOL STOP ACTUALLY I WAS JUST AWAY FROM THE INTERWEBZ FOR FIVE MONTHS STOP TELEGRAM SPEAK IS A STILL AS FUN AS EVER STOP

Even if it isn't future Oscar winner Indiana Jones and the Muffin Vision, that film project sounds promising! Or it did...cuz for all I know it could be finished already. Are you done? How did it go??? OvO
#platinumendissomethingishouldcatchupon #doublesuicidespoilers #cuzihavenotreadthosechaptersyet

Choromatsu......not a bad choice, but possibly not my favorite. Because I am not sure who my favorite is....actually, wait, it might be Karamatsu! Stand taken! Uta no Prince-sama is another on my PTW :( I'll finish that list one day!!!!! Huzzah!!! Maybe........

I studied abroad in Japan! That's why I was away for so long! I didn't bring my laptop haha. This table with its clowns, ferrets, and hammer-holes is so nostalgic, clown tears come to my eyes! :') lol

Pssssh, was there ever any doubt that we weren't good at this moviemaking dealio? Hahaha but yes, insert the muffins! Go! Go! Go!*Cherokee tear slides down cheek as blueberry explosions are reminiscent of the late great Gene Wilder*

That is quite the revelation! I will comment on that as soon as I read those chapters...... :P

Sheason floats back to the docks after 5 months, arms filled with ghostfish. Whilst in search of a ghostfishery, Sheason got sidetracked by the alluring aroma of melon bread and became lost. After finding and obtaining ghostfish, Sheason finds the docks completely empty with the exception of a single melancholy, hungry-looking tanuki playing solitaire. Sheason Duerulo drops a single ghostfish, which is quickly scooped from the wooden planks by the emaciated tanuki, and as a result, Sheason accidentally befriends the small creature. His new adventure of finding his lost pirate crew in the company of a food-scavenging tanuki begins!

P.S. I can't help you with that, because if I find one, I will naturally and selfishly want to keep it for my the protection of my bookcases! It looks like we can only have a contest to find one of these rare puppies........ OvO

P.P.S. I will! Hopefully soon!

Orange is rather poetic in that sense - its tale is short, but it makes you think and ponder about it for a very long time.

jepifish Apr 4, 2016 2:57 AM
A lot of Naho's hesitation stems from her subconscious worry that her actions might end up painting her in a bad light. She's selfish in that sense, but since it isn't intentional and the situation she is in rather complex, her behaviour is understandable. It's that selfishness that paints her in a much more realistic light than if she was portrayed as some sort of selfless Messianic character who is capable of being purely selfless. I can't really relate to her since I was more of a Takako when I was 16 (still sort of am haha), but there is a lot to appreciate about her and how she handles the situation she is in.

HanaKana is a good fit. I like her a lot of her works, but I'm worried that she might try for something quite moe, which I don't think will work for Naho. Hopefully, the performance is more akin to the one she served in Psycho-Pass rather than in Steins;Gate (because whilst Mayuri Shiina was sweet, her voice had the tendency to make her sound like an annoying airhead).

SheasonDuerulo Mar 10, 2016 10:23 PM
HELLO STOP ALLOW ME TO BEGIN BY STATING THAT I AM ENJOYING MORSE CODE EVER SO MUCH STOP THEREFORE I HAVE ELECTED PRELUDE OUR NORMAL LETTERS WITH A REPLY TO YOUR OWN MORSE CODE MESSAGE AS AN EXCUSE TO CONTINUE THIS FORM OF COMMUNICATION THAT TICKLES ME A SHADE OF COLOR NO DARKER THAN THE BRIGHTEST OF PINKS STOP MOVING ON I WISH TO THANK YOU FOR THE WELL WISHES YOU SENT ME FOR MY BIRTHDAY STOP IF THAT SENTIMENT ALONE WAS NOT SUFFICIENT TO HEARTEN ME TO THE LEVEL OF A WEEK LONG GOOD MOOD THEN THE WONDEFUL SKETCH YOU SENT SERVED TO QUADRUPLE THE LENGTH OF MY MOOD TO THAT OF A MONTH STOP SERIOUSLY YO STOP I GIGGLED FOR A GOOD THIRTY SECONDS BEFORE PAUSING ONLY TO LAUGH AGAIN STOP THANK YOU VERY MUCH STOP

Ooooohhh!! I would absolutely love to hear about this semi-ambitious project! And I will absolutely use peer pressure as your BFF to ask you to tell me about it! Unless you don't want to, in which case I will not do so! But either way, that's cool. Busy is good. Even at the cost of *gasp* Platinum End. #gaspingforfun #doublesuicidesforfun

Trust me, I know that slope all too well >_> Even then, I agree, books are lifesavingsworth it! I also am in newwordagreeance about lifesavingsworth.
I am incredibly proud that my BFF is going to undergo the pleasure of watching Osomatsu-san! I desperately need to catch up, as I, too, have been very semi-ambitious and active lately. This relates to why it took me so long to write a reply. Actually, my endeavor is very exciting, and I don't know if I should tell you about it now, or wait until it comes to fruition OvO *panics at the sight of the clown-ferret table in danger and throws a hammer at the table and ends up with a clown-ferret table with a mysterious hammer-shaped hole*

What?!?!!! Who told you that!??! I don't know what you're talking about! What's your name, huh?! Who's that behind you?! *scurries out of the room when you look behind you*

I would be perfectly okay with making it a flashback film. I would still be the star, obviously, but I don't mind throwing a bone to mah boi Harry Ford........... *explodes from being too hip*

And so the pair would set about gathering a pirate crew. SheasonDuerulo would float a lot all ghost-like. Because he was a ghost. KaguyaSenshi would begin by interviewing potential crewmates, which would involve a lot of creeping up on people, interested in piracy or not. Despite a majority of candidates declining the offer or screaming and running scared before giving an official answer, Kaguya and Sheason would come across several apathetic teenage Internet pirates with a wealth of stolen digital media that would surely come in handy in a pinch one day. Kaguya also managed to coerce a few ferrets into joining through bribes of food. In addition, the pirate pair also gather a number a weasels mixed in with the ferrets, and did not have the heart to deny them food bribes of entry into their crew simply because they were of a separate species.

P.S. Hahahaha fire-breathing puppies are one of my better ideas for guard animals OvO

P.P.S. Hey wait! I was gonna be the one to list every scene in the series for being so great! Don't take this away from me, please! Like when I got chills from them playing that song one last time at the church in the end. *chills at the thought* I would rewatch, but I can't even find time to finish Trigun and start Cowboy Bebop haha :P

jepifish Mar 9, 2016 2:23 AM
I really appreciated chapter 19 because it helped me to understand Kakeru, and the source of his grief, to a greater extent. He was always quite a sympathetic figure, but it was sometimes difficult to completely empathise him when we only got to see him from Naho's perspective. Takano Ichigo is a very skilled writer.

One day I'm going to say that by accident and turn the entire swim team against me :b

palladia Mar 6, 2016 8:31 PM
I watch the pineapple video religiously. Every time we buy pineapples I wheeze a little bit xD

I definitely will ^^ We have baeball, baeblades [ Touken Ranbu ], now to think of something relevant to Free!...

jepifish Mar 5, 2016 1:50 PM
For a manga that is really quite short, Orange's story is incredibly deep and complex. It isn't a "feels" manga because characters are crying, but because it deals with its subject matter in a sensitive manner. I could relate to Kakeru's struggles on a personal level, and that's what almost brought me to tears for several pages. Orange manages to tell a story that is both fulfilling and touching, in just 22 chapters, whilst most manga will struggle to do that in over 100 chapters.

Yes! He's a wonderful character. A stand up guy who is willing to put his own feelings on the line for the greater good. He was also able to provide Kakeru with the strength and insight that Naho couldn't.

jepifish Mar 3, 2016 10:34 AM
I read your explanation about the time-travel in 'Orange' and I have to say that you absolutely hit the nail on the head with it. A lot of people seem to miss the point, when it comes down to how 'Orange' ended, as they don't realise that 'Orange' isn't about changing the past but about changing a person. Giving them that push they need in order to live. It's very poetic, in that sense. One thing that I really liked about the time-travel aspect of 'Orange' was the fact that the characters didn't understand how the time travel worked, to begin with, and their future selves didn't even believe it would work. I found that very realistic and human.

Oops, look at me harping on about something you've already explained. lol.

SheasonDuerulo Feb 26, 2016 10:15 PM
HELLO STOP ITS BEEN AWHILE HASNT IT STOP YOUR MOST RECENT LETTER WAS VERY NICE TO RECEIVE AFTER THE LONG GAP IN CORRESPONDENCE STOP IT IS WONDERFUL TO HEAR YOU ARE TOILING UNDER PLEASANT CONDITIONS ALBEIT AT THE COST OF A DELAYED READING OF THE EVER ENJOYABLE PLATINUM END STOP NEVERTHELESS SUCH A HEARTENING GESTURE COMPELS ME TO CONTINUE OUR EXCHANGE FROM WHERE WE LAST LEFT OFF STOP HOWEVER IT PAINS ME TO ANNOUNCE THAT I TOO FIND MYSELF IN FAIRLY BUSY TIMES STOP THEREFORE I TAKE IT UPON MYSELF TO CONVEY MY CONTINUED LOYALTY TO OUR FRIENDSHIP AS IN THE FATHERS VOW RENEWAL TO HIS CREATOR IN THE FACE OF GRAVE SIN STOP AFTER ALL WHILE THE FIRST TWO PILLARS OF THE TERM BFF NUMBER BEST AND FRIEND THE THIRD PROUDLY UPHOLDS AS FOREVER AND IT IS THIS SENTIMENT THAT BEST DESCRIBES THE EXPIRATION OF OUR FRIENDSHIP STOP WHAT I MEAN TO SAY IS SORRY FOR MAKING YOU WAIT FOR A REPLY STOP IT IS ON ITS WAY STOP SORRY FOR ALL THE CAPS HOMESLICE STOP DAMN I PROBABLY COULD HAVE JUST WRITTEN A REPLY WITH THIS LENGTH OF TEXT STOP OH WELL STOP MIMICKING MORSE CODE IS FUN STOP TALK TO YOU LATER STOP

Husbandos always make an anime worth it ;D I don't know much about baseball [ typed baeball, was it an accident or ], but I will give it a try! It seems to be highly praised.
Lol my friend has a Kuroko no Basuke body pillow. And Kuroko looks like such a cutie omg; superpowers thrown in must make it pretty interesting.
Hmmm my friends have been badgering me to watch Haikyuu so I'll start with that [ the Galileo Galilei song in the ED <3 ]
All Comments