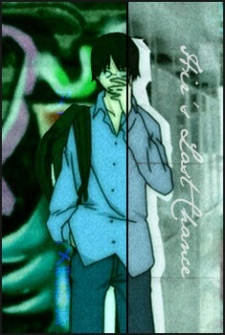 AIM: fire!
MSN: no one uses that
Yahoo: not this either

Blockbust Jan 1, 2017 5:01 PM
Oh my, sorry about the wait! I've been on and off with work, school, etc. and never noticed that there was a comments section down here. T_T

Some of my favorites are Baccano, FLCL, Mushishi, and Aria the Animation/Natural/Origination.

ezlord Apr 5, 2016 5:50 PM
Like that profile u have going on there
But happy birthday before I forget I know it's a few days before

Eizaki May 15, 2015 1:51 AM
Oh thank you, and also sorry for replying a year late hahaha. I haven't been really active in this website.

I don't give a damn if someone has the wrong number of episodes set for a series.

I also already know that you can't set the episode count higher than the total number of episodes*.

My intention was to make people aware of the fact that episode zero had its own entry rather than being the first episode of the series, so that people could add that entry to their list. MAL does not have, and can not have, any methods of dealing with this.**

What the hell would be the point of contacting a DB admin about this? It would just be a complete waste of my and their time.

And yes, I could have checked the ep. 0 entry watching list to see whether or not each individual user had set that entry to watching. But that really would not have been worth it. Far easier to just send the message out to more people than necessary - after all, there is no harm done in sending it to someone it doesn't apply to (other than the 15 seconds required between each message) and most normal people would acknowledge this and ignore or just delete the message rather than flying into a butthurt rage filled with misunderstanding, hilariously inaccurate assumptions, logical fallacies, excessive use of capital letters and irrelevant points and analogies, and hinted death threats.

*well technically you can, but it's bug abuse.
** again technically this could be done but it would just piss people off if every time they added something to their list a message popped up detailing all the related series with a message along the lines of "are you sure you don't want to add these as well?"

kuuderes_shadow Mar 29, 2015 12:33 AM
Oh and one last thing - what makes you think I'm in any way a fraud? Or was that just a part of the quote that you couldn't come up with anything to do with?
All Comments