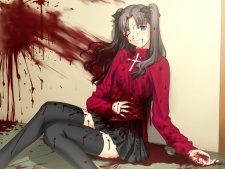 Potimas Oct 9, 3:26 PM
(Spoilers of Remember11) Yep, I really enjoyed the elements of the body-swapping and the main characters in general. Though unfortunately I didn't really understand the ending until I found a post talking about the underlying plot. Even so, it still blew my mind on what was actually going on in the background.

I agree the ending was brutal, but in a way, I kinda like how ending plays out, where the player themselves continues to try to find another ending, but they fail to realize that it's just a infinite loop.

Potimas Oct 9, 9:50 AM
Yeah, I'm a big fan of time travel stories as well, I really enjoyed Ever17.
I kinda wish that the other game they made which is Remember 11 was fully finished, it had some great potential.

Potimas Oct 8, 6:01 PM
oh wow, you played Root Double? First time I ever seen anyone who has played it on MAL.

Tsukumo_Yuuma Oct 1, 1:22 PM
(Spoilers for all of Higurashi arcs) Yeah i just said that most aren't solvable so no one come to me and say that something was actually solvable :0
I agree with you most of the mysteries can't be answered except like who kills tomitake (cuz of the Takano scene in Ch.3) and that Takano may be faking her death (the last scene in Ch.2 and Oishi saying it again in Ch.6), aside from those i don't think you can figure out anything about Rika or the Hinamizawa Syndrome from the question arcs at all, which was a shame cuz i really kept thinking hard about a lot of things thinking i might find the right answers (and that there's super natural stuff and Hanyuu and blah blah), so if the new anime will actually make the mystery solvable by making good hints like the last scene in ep1, it'll be great IMO.

Harlequina Apr 23, 2018 7:15 AM
All the mysteries haven't even been presented yet, because you haven't read the four questions arcs yet. So that's what you're meant to do. Obviously when the game first came out JP players didn't have access to all four yet, So they just theorized based on what they had. That' fine. You can do that too. I can't tell you though what's possible or not possible to solve already, because that would be spoilers.

There's more to be said about the arcs, but that's enough for now. 1-4 are questions arcs, they will present mysteries mostly, as you've already seen. 5-8 are "answer arcs". Personally I didn't spend a large amount of time to theorize. Some people do, but I just thought about things and made theories as the story went along. Sure more information comes up over time, and maybe some of it invalidates a theory you had, but that doesn't really matter. You're obviously attempting to solve things, that's what's important. You can just keep doing that as you continue reading. That's essentially what the JP players had to do anyway because of the staggered releases.

Also as far as Higurashi vs Umineko is concerned, it's not that rare that people prefer Higu over Umi. For westerners, especially on the VN subreddit, Umineko is favored. In others places it'll be Higurashi. I understand what you mean anyway. Personally I like Hinamizawa a great deal more as a setting.

It's great to see you're still here too, FlamepriesT

Harlequina Apr 13, 2018 5:24 AM
The delay for arc 6 and onwards has been longer than usual. I could be wrong, but 6-7-8 might be releasing much much closer to each other (and it won't be long before 6 is done and out). But yes it's possible to read the old version still. But that's a different translation entirely. Different style. Also no voice acting for that, and a worse resolution.

>Is there some sort of quick summary of each chapter for those who can't remember much?

There isn't some obvious quick summary to get, no. That's just how it is. When Higurashi and Umineko released in Japan there were also breaks between chapters. 6+ month long ones I think. To be honest with you, people who read it today are at a "disadvantage", because back then you were basically expected to reread chapters and/or talk with other people about the story and mysteries - before the next chapter comes out. But now most people will simply read through the whole thing in one go (I did too), because they CAN do that. Even people who play the steam version can decided to continue with the old version if they want to. In most cases they probably won't be discussing events in the story with other people who are reading it for the first time either. Not only that, but the anime is popular, so loads of people have seen that by now.

>Oh, and would you say it's important to remember these things in Higurashi as much as in Umineko?

Higurashi is not as hard to digest as Umineko, if that's what you're asking. But it's still a mystery story.

https://github.com/07th-mod/onikakushi/releases <- this. And that's just for the first arc. It doesn't come automatically with the game. As you can see they got lip syncing done for that one recently. These mods only work for the steam version.

>And one last thing, do you think there's any issue (maybe spoilers or something) if I were to read a chapter of Higurashi, then watch the episodes that adapt it before reading the next chapter?

You can watch episodes 1-4. Those are the first arc, Onikakushi. BUT! The start of the fifth episode (before the OP plays) is something that is NOT supposed to be shown at that point in Higurashi. Avoid that if you can. Basically they put that scene there mainly for shock value, and that's it.
I just realised the best way to describe the VN and anime is: The VN is subtle. The anime is not subtle in the least. I'm not just referring to that scene at the start of episode 5.

Harlequina Apr 11, 2018 3:13 AM
If you haven't been spoiled on anything big with Higurashi, it would be a huge waste to not experience it the best possible way. And the best possible way to experience it now in English is with a modded steam release of the game. The anime is "fine". But now it's not better in any way compared to the VN, because of all the mods and the steam versions that has come out. It doesn't have the advantage of having voice acting anymore, for example. It doesn't look good either, compared to the HD stuff you get through mods now for the game.

But besides that, it gets some things just wrong with the content. I don't wanna delve into it too much, but it places emphasis on the wrong things, pretty much just for shock value and becoming meme-tier to anime-only people. People even get the wrong impression of what Higurashi is supposed to be about and like because of the anime.

So... I guess it's not actually fine --- when you compare it with the VN (and manga). Compared to other anime though it's actually pretty good. I mean you do get the full story with it.

Maybe you'll watch the first few episodes and enjoy it, and continue. But if you ever decide to read the VN in full later on you'll see exactly what I mean. Maybe you'll regret not having experienced the mystery in the VN first.

EGOIST Sep 2, 2016 12:27 AM
Somewhat, I've seen some gampeplay of it but I'm don't like it that much since it kind of reminds me of Saw(movie) which I also don't really like but maybe when I'm bored one day I'll try it out :)

Harlequina Mar 17, 2016 1:24 PM
Well I'm glad you get some enjoyment out of the series at least. I don't really have anything to say about your complaints for it though, they don't resonate with me. But I understand why you particularly enjoyed EP5 anyway. It's an exciting one, one reason being the new (great) characters.

You'll have to put it on hold again if you were planning on reading Root Double immediately, since that's coming out soon. Unless you're close to finishin Umineko by now.