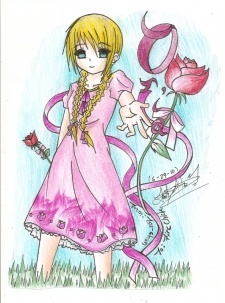 They're both war movies based on real life people that adapt their lives into movie format. Both are focused on young girls, their lives, and their families both before and after World War II, both girls have to grow up fast and deal with tragedy in their own way in order to survive, and they both lose their families. Admittedly though, Who's Left Behind is stronger because it's more subtle, has better character development, the characters are more engaging and three dimensional, and there's very little conflict, and when there's actual death, it isn't explicit, making the movie far more chilling. It also has a bit more heart to it than Glass Rabbit.

They both deal with issues such as slavery and friendship, though 07-Ghost is supernatural and fantasy (in a fictional religious setting) while Romeo is historical and slice of life (in 19th century Italy). Both anime have a brown-haired main character (Teito and Romeo) and a blond-haired best friend (Mikage and Alfredo) and both characters in those anime make a friendship oath. In 07-Ghost the issue of slavery is addressed very briefly while in Romeo's Blue Skies it's part of the main storyline. Both have great soundtracks, great stories, and wonderful characters! Both main characters have cute little animal companions too (but for 07-Ghost it's a pink bunny dragon while in Romeo it's a white ferret).