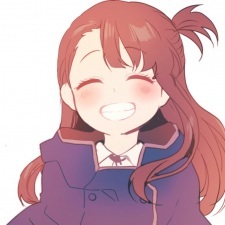 ya but even so the plot was not making any sense also the irregular highschool is coming to end .

I'm doing good, how bout you?~

AhegaoLoliCon 7 hours ago
Oh yeah that's the only downside to having an external but you could just archive the old things and then carry it just in case. That's what I do to keep my laptop storage free.
That's good SDD are way more expensive :P

You just buy the server from a company and then it's a monthly payment usually. I used ApexHosting to host the Minecraft server it was about $20 I think for 4gb of ram. There are other sites as well, I would just do some research on what's best for your area.

Wait whaaaat really I'm on week 3 and I took 5 tests and an Exam already with at least 50hrs of lectures. Maybe it's different over there?
I'm a little busy nowadays so I don't practice as often as I should but I will once I'm back on break. I haven't played anything too crazy just some older learned stuff to keep up my skills.

Yeah definitely if not I was going to read the manga. I prefer waiting for the anime if it is announced tho.
Oh you started Demon Slayer?
Ahhh same same lol
I see lol I might check it out I'm a okay with a little "culture" or controversial things.

Yup, one of my two friends who was at the party was telling us how he started working as a pest exterminator and he told us this funny/terrifying anecdote about this one time he was killing a pigeon, and it somehow managed to escape over the edge of the yard in which my friend was at
with its head almost snapped off completely and its guts exposed
, lol~!x'D

I was playing the first chapter: Onikakushi this morning.
First off, the original design for the character sprites are hilarious. Cute thick hands.

The anime has better music but that’s to be expected I guess.
+ Rena’s laugh just doesn’t have the same impact in the VN

The VN I think has better insight on the characters and their personalities which were sort of changed around or emphasized more in the anime. For example Mion. Mion in the anime is pretty clumsy, maybe childish is a good way to say it which wasn't highlighted as much in the vn.
^If that makes sense lol

I’ll check out the second chapter: Watanagashi-hen when I can but I’ve been pretty busy with school. Sigh 😔
But yes I really like it so far :)

J-Tea-Chugger Sep 21, 6:42 PM
I introduced someone else to Demon Slayer, I am truly amazing!!

Madotsuki_Zef Sep 21, 4:45 PM
It is something curious, I wonder why it is less common now.
The animes from before had a special and charming aesthetic, so I want to watch some more.

True, but I suppose that the authors fear having a closed ending that not everyone likes, that's why they opt for an ending open to everyone's imagination.

Of course! do you think anime is a good adaptation or do you think manga is better?
It would be easier and faster for me to watch the anime but probably the adaptation is not the best, what do you think? the manga is differentially better, just a little or are they of a similar quality?

I liked the first season of steins; gate from the beginning, because I expected a super serious anime and it turned out to be a pretty funny anime that progresse episode by episode jsjsjs

true, I realized that people judge quite quickly, when watched the comments of the first episode of koi kaze.
they already had a preconceived idea that it was a disgusting anime, they weren't interested in trying to give the story a chance.

What should be done about cheaters?
i think sekai at first helped makoto for fun, and when her feelings started to blossom she thought she could keep them in check, and finally she succumbed thinking that she too had the right to enjoy his love.
Makoto was also a good person in the first chapters, but he soon gave up his idealization of kotonoha, because he couldn't control his constantly increasing libido ._.xD
and kotonoha was always too innocent and pure for this rotten world lol

i see!
I wonder if the second season of clannad will make me cry, I already watched the first season again.
And I can only say that tomoyo is still great after so many years! owo

Do you plan to watch the third season of oregairu soon?
in the most recent chapter something great happened owo
who is your favorite oregairu character?

Well in this case we do not agree, I can't stand taiga, I think she is quite selfish. but it's good that we all have different preferences, that makes the world much more fun.
True, I also quite like Manami

HikariKeyyy Sep 21, 1:31 PM
well to be honest the story is not that good and all the main protags are soooo freaking boaring really,watching that show makes you wanna sleep for 10 hours lol

Klefki_of_Awsome Sep 21, 7:48 AM
Yeah, it doesn't suit him so bad it actually does suit him in the end, lol~^^
Yeah, two of my good friends from way back in Elementary and throughout HS and even now as well came and celebrated with me at my place yesterday so that was fun~!^v^

YoukaiFox Sep 21, 6:52 AM
yep ><!!
Welcome :) That's really nice of u to say that :)
i agree.I m pretty glad that most of my friends don't have a problem with it :)
Yes true...i would just feel like I m staring at my child and not a romantic partner ...
Ah makes sense.So the age gap isn't that huge in most cases.So ...ppl can fall for their siblings I guess...
Yes I agree!!! I think the same man.
Lgbt ppl r not hurting u so what 's ur problem man ?-That's what I wanna say to homophobic,transphobic etc ppl.
Glad u understand :)
Thank you!! :)

SteelBallGyro Sep 20, 4:18 AM
Oh yeah, I can understand that it can be a bit repetitive. Though I didn't mind it at all, for me all other aspects of the game, be it music, atmosphere etc. overshadowed any possible flaws. But personally I didn't see it as a flaw. It reminds me of RDR2 in a sense that is also a game which is criticized for its shooting/cover mechanics but heavily praised in other areas (map design, attention to detail, interactive open world, storytelling, acting etc. etc.) and those areas overshadow any flaws. I agree that with combat alone Nier Automata wouldn't be worth it. But same can be said about other games too, like I wouldn't be playing Borderlands for the story either :P

Those changes in Nier Replicant are probably because of Automata fans, the original game wasn't exactly praised for its gameplay but for other things. It was a failure sales-wise but it became a cult classic over time.

Regarding Mechromancer...that way of playing I described isn't exclusive to her character but she has skills which are extremely beneficial for this type of playing. With that gun which ricochets bullets she becomes very powerful. One of the more popular builds with her character is utilizing Anarchy skill, which over time both increases your damage but also lowers accuracy of your weapon. With that gun I mentioned and this Anarchy skill she can become very powerful. At the same time it also means that with this skill active you can no longer just aim and kill the enemy because your accuracy is so low. That requires you to use different strategies, such as using this gun that ricochets bullets. It's just another way to play the game, there is a huge variety in every character, and I believe it's the same in BL.

Elden Ring indeed has a lot of hype surrounding it, but that's not solely thanks to GRRM, it's a From Software game after all. I am definitely very excited to see a more story-based Souls game. Though I do want them to keep making traditional Souls games too, I really like those games because you have to figure out everything yourself. Not just the story, but also gameplay.

BTW I finally completed Pokémon Shield, I think putting Eternatus in my party in the last battle with Leon possibly made things too easy xD Nevertheless I really enjoyed it, I found out there is some post-ending stuff to do, so right now I am dealing with that Shieldbert guy and his brother. Do you recommend the DLCs too? Though I am not sure I am gonna buy them, I would much rather return to BOTW and get those DLCs instead. I miss that game a lot even though I finished it.

AhegaoLoliCon Sep 19, 11:12 PM
Oh that's good that they are affordable. Isn't it just a usb-c? That's what we have you don't really have to do anything but plug it in. Oh that really sucks. On the bright side you have the laptop still :D

Yeah that's the only way that it could be free if we left the computer on the entire time which we didn't really want to do. Some of my friends have a different time zone so they play at odd hours that's why we bought one.

LUCKY!!!!!!!!! I am being bombarded :P but I am pushing through XD
Yeah everyone starts out at a different level but everyone can be at the high level if they put enough effort into it.

Last time I checked I think it was confirmed or they jebaited me XD but I am pretty sure that it was.
It's a solid series even though it is over hyped.
Oh if you have any recommendation for short stories or manga in general lmk I have more time to read than watching anime so.

Kajiuran Sep 19, 5:41 PM
I agree. Some games have fun cheat codes, like the GTA games. There's the codes to make the civilians super-aggressive and have weapons, and then there's unintended fun, like the "Carmageddon" mod, which just tweaks some of the physics code to make cars fly around and act all crazy at the slightest touch! It's fun to wander around and see cars whipping around and then they hit you, lol.

I wanted to boycott Capcom for canceling Mega Man Legends 3, but then they made excellent games like Devil May Cry 5, so I ended up folding and buying their games, rofl. Oh well. One person boycotting them wouldn't have made a difference, anyway.

It'll likely take me longer to level because I read the quest descriptions and flavor text. It might speed up a bit when I start AoE (area of effect) grinding, where I do damage to multiple enemies at once, for really efficient leveling. I'm still waiting on getting my new PC, but I'm fairly sure I'll get it sometime this year.

I love it when people beat games in ways the developers probably didn't foresee. For example, some girl beat a hard optional boss from Kingdom Hearts while using a Dance Dance Revolution pad as her controller! I also saw someone beat Soul Calibur with a fishing rod controller.

The classic Doom games are also quite action-packed.

My other favorite Zelda games are Link's Awakening, Majora's Mask, and the Oracle games. I didn't hear about the new Zelda game yet. Got any details on it? :o

Will do! I’m downloading the Higurashi games right now. I’ll give you an update once I’ve finished reading the vn.
All Comments