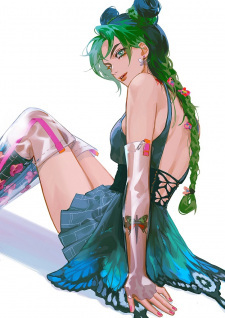 adnan_ Aug 15, 2021 11:10 PM
Yeah I agree with your theory, look at Your Lie in April and Code Geass R2. I don't think they would've been this high in ranking without their last episode.

Hahahaha MANGA Fandom is really something else, they are the reason I hate AoT Fandom bc its mostly the manga readers who are so overdramatic about everything

Hmm My first anime was Death Note as it was popular in India and then FMAB. Wbu?

Yeah I also saw some really small clips and Oh boy it does not look like a long running series at all.

Jojo is one of the most subjective anime I've seen. So I agree with this.

Actually I don't get why JJK S1 is so high rated. The plot wasn't really that good for the rating it have. Animation and execution played a huge role imo.

Oh, thanks. There was a thread someone made in the SnK s4 Forum asking how bad is the end and from the 100 responses [when I counted] around 40 said its bad and 60 said its good. So I think its definitely polarizing. Well manga readers always exaggerated things so I am not really surprised watching them shamelessly giving it a series they liked this much and thought was a masterpiece a 1 bc of the end.

Yeah I meant exactly those two.
My top picks would be-

I have to catchup to OP looking at the amount of arcs you have in your list.

JOJO was disappointing for me. Whole P3 was plain boring except some scenes like Dio VS Jotaro. P2 and P1 were good but nothing special. I've yet to finish P4 as its on hold for now.

I've read some Beginning Chapters of CSM but stopped after watching that Gorgeous PV and want to experience the story in its utmost potential. I agree that CSM gives the hybrid Shounen-Seinen vibes like SnK, JJK as they are not really appropriate for young audience between the age of 8-12 and they also won't be able to really appreciate the story as the plot's kinda complex.

Btw I wanted to ask you something as an anime-only, Is the end of SnK really bad? Like the GOT Level bad? What would you rate the end out of 10?

Masshiroi Jul 12, 2021 12:46 PM
Hi, sorry for late reply. I have only very little time for MAL in general, sadly, but what can you do. How are you? Everything good? I m feeling a bit better now. I wanted to recommend you a Witchercon, I found it on YT. There are interviews with actors from Netflix series, trailer for S2, talk with Henry Cavill and many many interesting facts not only from books and series, but also Witcher3 game, they talked specifically with game developers. I think it might interest you, it´s for free, of course.
I've seen a lot of anime recently, sadly only some of them are worth mentioning. I am watching Fumetsu no Anata e now (I read manga before so I know what I am going into, but it really is beatifully made so far), then I watched Jouran: The princess of blood and snow (let´s say opening was the best part), Wonder Egg (great and rare anime, but the butchered the end the evangelion way, so I wasn´t pleased), and A place further than the universe (if you like coming.of.age stories, you might want to chcek it out). I also binged up some Makoto Shinkai movies, and was really impressed by his animation, storytelling and characters.. In autumn, I return to work, but I hope I´ll have enough time for anime as I am looking forward to some other series (if I am mot wrong, KNY S2 should be coming out and also Magia Record - I am a sucker for any dark maou shoujo).
Looking forward to read from you again!

adnan_ Jul 8, 2021 11:08 AM
Well, 7-8 is still considered the beginning phase imo but as the way you are describing he enjoyed it enough to recommend it to you non-stop which is enough. I can't imagine he had to sit through 2 years of fillers to get to a canon one atlast💀💀💀. I also enjoyed Naruto very much but I couldn't give it more than an 8 bc of the plot holes it had.
Well I can't blame them as 4-5 of its serious arcs are so fking emotional that it can make a grown up man emotional among which 2 of them are kino arcs in shounen.

I too don't get this, why do thy discontinue an amazing anime but release 7 seasons of an average at best isekai, parody chibi anime is beyond me.(｀^´) and WHAT A MOVIE FOR A PARODY ANIME!!!! Come on Japan you know better than thisつ´Д`)つ

I hope they announce a S3 soon and don't mess it up as JC Staff is infamous for that.

adnan_ Jul 7, 2021 10:07 AM
Wow, it would be a completely different experience when you understand its lyrics. For eg., when I listen to YSBG or any AOT Soundtrack I go like ~A feel runded like it feeling that you can be runding ncsovsduvvndsnjdiajdj~ LMAOOOOOOOOOOO
Its kinda surprising his 1st anime was Gintama as Gintama sometimes heavily depend on the references and parody which can be only understood when you know a decent amount of anime and its community.

Spirited Away is the best example for the '6' in my rating system.

I laugh in literally every chapter of Grand Blue manga but I found some of the funny arcs of Gintama to be less funny that just put a smile on my face and nothing more. So bc Grand Blue has a 100% success rate of making me laugh but Gintama has a 85%-90% success rate Grand Blue is superior in the comedy aspect for me.

Actually Konosuba is my 3rd fav. comedy and my fav. isekai. I sooo much want a 3rd season >.<

adnan_ Jul 5, 2021 11:50 PM
Kira's and L's theme are legendary, anyone can grow a few braincells by just listening to those OSTs LMAO.

Yeah that's fine. Its better you concentrate only on Gintama whenever you plan to watch it. I am tellin' ya it will be one hell of a ride.
Lol if he had already watched Gintama, why is he not starting HxH its way shorter than Gintama.

Btw have you watched Gintama??

adnan_ Jul 4, 2021 10:27 AM
Yeah I remember you XDDDD
It was pretty clear OP has nothing to defend and he was just dragging the debate, so I thought let's just end it once and for all.
Btw thanks for reading it upto the end XDDDDDDD
Ahhhh Thanks for the compliment dude. You also have good taste!!
I hate Gurenn lagann bc its senseless imo but I understand its appeal and why people like it. So don't worry Iwon't shit on it hehe

kaiki_fan_boy Apr 18, 2021 3:02 PM
Yeah hopefully they'll have the time to animate everything proprerly. I know that it won't happen but imagine if chainsaw man got the jujutsu treatement. If they screw it up I'll just read the rest of the manga since the art is great but I would love to see chainsaw man animated well. But as you said it's going to be hard.

kaiki_fan_boy Apr 16, 2021 1:37 PM
Nothing in particualar. I am already chainsaw man and I am loving it so far. And yeah the fight scenes are great, it always feels so chaotic (in a good way). I am really interested by the plot and I like every character. I am also a power simp Xd.

asetrisk Apr 13, 2021 12:08 AM
Sorry for the late response, yeah I've seen the discussions on the ending and they are catastrophic

Idk how to feel about the ending, I'm personally not the biggest fan of the ending, it wasn't bad nor was it good imo. too many questions were unanswered and there were a few loose ends, but with time I think it will grow on all of us.

kaiki_fan_boy Apr 12, 2021 10:26 AM
I agree I don't think Eren's character got assasinated in any way, people are just mad that he is not a "chad" as they wanted. But yeah his love for Mikasa did feel out of place. I would probably give it a 7/10 too since it is still far from flawless.
All Comments