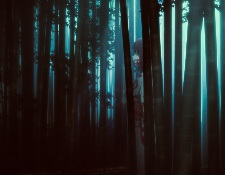 Rinarin Oct 3, 2019 5:51 AM
Of course it's fine! I'm actually pleasantly surprised someone clicked on it! (i thought those links go unnoticed most of the time) It's a song to match my theme (the avatar, the character is Edgar from Poe no Ichizoku) and the track is someone playing one of the insert songs of the Poe no Ichizoku stage play adaptation by Takarazuka revue.

Berry-Vodka Sep 27, 2019 11:36 PM
that's a standalone episode in samurai champloo, it's not involved in searchin for the stinky sunflower guy ;) it was strange...

sakura centric XD i'm sorry that is the only word that came to my mind at that moment to describe my frustration with the show. the first movie of xxxholic is cross down with the first MOVIE of tsb chronicles not the show: it's like watching the same thing but from diferent angles, u know? a pretty cool idea... but since i have the time i'll watch the series too.

i'm not reading any manga at the moment, and sakura is not a very eye catching story so far but thanks! as for xxxholic i only watched the first series, it's very good. well... the desproportional design of the characters turn me off a bit.

i'll say 5 or 7 eps per day for yu yu hakusho, it's what my computer can take anyway.
I like this guy. say hi when you see him!

ah, you can change also the score while you are watching! nobody is judging you. in my case, sometimes an episode lower the score down to one point because it feels bad or it's boring... otherwise it goes up until the very end if i think the episodes keep getting good.

about getbackrs; i don't know if it was a budget problem or the manga indeed did finish later than the series and the studio had to make its own ending with what they got (the unlimited fortress), because they really don't return to it in the manga lol!

yes, i love latin america dubs (venezuela, colombia, chile, mexico, argentina), the thing is that in this site you can't specify an score for dubs and subs like in anime news network dot com, my second listing site.
By the time i am watching subs! do u wanna know which ones?

>>yes, Eiji is funny also momoshiro + ryoma, sadayaru. but moon volley move?? xD i've no iidea who dat guy is. why aren't you playing anymore? (may i ask)

haikara-san ga tooru! it's true. the sub is not available yet!

i also like the "prince of tennis experience" i enjoy watching the fun interactions between the characters.

Berry-Vodka Sep 24, 2019 7:20 PM
Heh, not your fault for the long posting in fact, i just ask for too much :) So my assumptions were correct after all, you rate the shows when you completed them, that's great then!
In any case the shows i listed, i also watched them in the past. i agreed with what you said about them.

in getbackers, i guess you'll get some background for ginji (the blondie), but not as interesting as in the manga. when i was 12 i thought it was the greatest but now i think it's a great tragedy to end it like this, when the manga has more than the unlimited fortress arc :<

Initial D is a show i enjoyed, i just don't remember how it ends so, i leave it on hold, because i can't find the dub (same situation for s.cry.ed and hell girl)
Now, i remember that episode in samurai champloo it was well done but i liked better that episode about a meteorite collision, the suspense... <3

A total new series for me is Tubasa chronicles! 10 eps and i just don't feel it. Sakura is always annoying but not for how she looks imo, but because how the story is so sakura centric and how special she is :P (sakura is op in this one), i just have to go through this crap to watch xxxHolic the movie.

my favorite mk is togashi sensei , but his works differ form each other (hunterxhunter, yuu yuu hakusho, level E, etc.). yu yu is meh, the plot stretches af like a story of 8 eps length could be better told in 4 eps but the director was an incompetent by that time, my patience is over. i had to binge watch the thing. i like the design only, gosh! beautiful bishounen dudes. Something similar to HxH would be shaman king imho, i feel it has familiar airs of

What to expect from the dark tournament? well it's just the same as before but replacing Toguro with another dude... was it Sensui? imo i would prefer to watch the death match of Hisoka and Kuroro at the heaven's arena anytime <3 well, that is still in manga form.

Anyway, nice talking to you!

Berry-Vodka Sep 18, 2019 10:47 PM
Thanks for sending me a request! And it shows you're a good person while the majority wouldn't bother to tell me that my settings were all fucked up xD

About the reply: Yeah, i was curious if you rate shows after completing them or you couldn't decide :P It would make me happy if you tell me what score they deserve based on the few episodes you watched:

Trick or Treat Limited Edition
Click here for your cards.
They should be sorted alphabetically.
If there are any issues, feel free to PM.

WARNING: You may have more than 1 card; they're not in alphabetical order