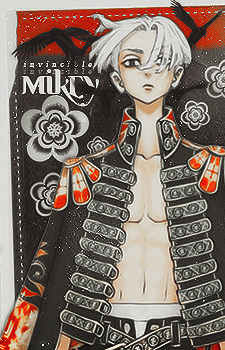 mutsukii 28 minutes ago
i think we def get some more games though only the ones with switch adaptions or PC games - rip all those beautiful ps vita/psp games, unless they make a port of them tho thats less likely

yeah they are safe til next month, then they get their vaccination aswell :)
i did enjoy it but i'm glad to be back since i had no wifi over there, just my phone data :^(

Araberu 7 hours ago
thank you so much once again for the forum set! thank you for taking the time to make it! (≧◡≦) ♡ i love it so much!!

uh i mean WHAT

healerblue Sep 14, 9:48 AM
It was my first time being in any kind of competition on MAL and I thought it would be nice to at least congratulate the people who won the first 5 places. In my opinion, it's nice or kind to commend (or congratulate) them for their efforts and skills.

I'm not a big fan of reading, which is kind of ironic since I finished reading that visual novel which was over 60+ hours (and now I need to wait for more chapters to get translated). I rarely read manga or light novels, I did read little bit of Classroom elite light novel and manga to see what happens after the anime but I usually read manga if anime ended in the middle of the story. An example would be Shield hero (although they did announce 2nd and 3rd season), Owari no Seraph and few more. If Tokyo revengers catches my interest, I would probably read the manga.
As for Pandora Hearts, I think I'll still watch the anime first because even if the anime isn't great, I could still enjoy it. If it ends on a cliffhanger or if I'm curious what happens next, I might read the manga although I do have 1 question. Are there any story elements that are changed in the anime compared to the manga? Like does it introduce new characters, new ending etc., since I know there are some anime with original characters or events that never happen in the manga.

This might sound ironic but let me explain.
I'm not sure if you mentioned collecting people due to my friend list but I agree with your perspective on it. I'm not big fan of adding people and never talking to them. I usually add people or comment on their profiles if I find something interesting on it or something that we can talk about. For example, the reason why I commented on your profile was because of Tokyo revengers and GFX actually, since I wanted to talk with you about it. I almost never add someone without sending a message or a comment. As for the friend requests that I get, I'm used to accepting most of them because when I was more active in few MAL clubs, I would write on forums and people would add me to chat more via messages or comments, after some time I stopped checking if they were in the same club so it just became a habit to accept the FR that people sent.

There are some people on my friend list that I was great friends with a few months ago or maybe even a year ago, but because our interest diverted, we haven't spoken since. I actually feel anxious about removing those friends because I don't want to seem rude so that might be why my friend list is the way it is. So yeah, it might be because I give people more benefit of the doubt that I'm more likely to add them or talk with them because I think anyone can be a great person and that they have something interesting to talk to, but if our interest or affinities are completely different or they are being toxic then yeah, there's no point in adding them in my opinion. If I'm good friends with someone or consider them close, I generally talk with them on discord or on DM/PM on MAL.

I'm sorry if this was a bit longer comment compared to the previous one but as you mentioned, you like to talk with the person first so I thought it might be better if I talked more about myself so you can see if you want to chat more or not. Hope you understand and I hope that you have a great day ^^

thanks for the delicious meal :pray:

My husband came up with the nickname 'Kuma-chan' back when he was still inside my belly. Now that my son has turned 1y3m old, we are still stuck with it whenever we are having a conversation between each other. We call him by his real name, however. Since I have seen news reports about how toddlers actually don't respond to their real names in school bc they got used to being addressed by nicknames at home orz Yeah, thanks to his super active personality during daytime, he doesn't really wake up at the middle of the night anymore. Hmm, that's probably because kids at such age are curious about things around them that's why they always have the tendency to touch or explore things which are unknown to them. :thinking: If anything, taking care of a child is certainly more tiring than just picking up an 8 hours long of job.

Things are pretty much the same here, we are required to scan QR code with an app developed by our government whenever we enter or leave a place we visited nowadays. The app will even shows whether you are 'not vaccinated', 'partially vaccinated' or 'fully vaccinated'. For now, I think Malaysia's government just doesn't give a fuck towards the numbers of people who are tested positive daily anymore. Most of the places are reopened and people who already took 2 doses of vaccines are basically free to go anywhere within the country now. I believe the reason they gave was because 'Delta is different from all these variants which they have encountered before since it is much easier to spread plus more deadly.' not to mention that people who caught the Delta variant will have a higher death rate as well... It certainly doesn't make me feel safe even when I am fully vaccinated now knowing that there are still chances for me to catch the virus, however I think the only good thing would be me suffering from only mild symptoms if I ever caught any other variants of the virus someday. *touchwood* So... Are you still waiting to be vaccinated? If the waiting list is crazy, does that means alot of people actually signed up for it as well?

Who would have predicted a pandemic would appear and mess up everyone's else life to begin with, right? /sighs/