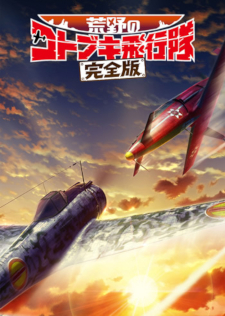 Production and distribution company Bandai Namco Arts announced on Saturday that the Kouya no Kotobuki Hikoutai (The Magnificent Kotobuki) series would be getting an anime compilation film. The theatrical version, titled Kouya no Kotobuki Hikoutai Kanzenban (The Magnificent Kotobuki Complete Edition), is set to premiere in Japan this coming fall with simultaneous screenings in MX4D. A new, unseen episode will be added to the omnibus reconstructed from all episodes of the TV anime.

Kouya no Kotobuki Hikoutai is an original military adventure anime by studios WAO World and GEMBA. The series premiered on January 13 last year, and subsequently aired 12 episodes which the film will compile content from. All cast and staff will reprise their respective roles from the series.

Bandai Namco Arts released the series on two Blu-ray volumes in Japan last year in May and July, respectively. Sentai Filmworks' home video distributor Section23 Films will release the series in the US on Blu-ray on February 4.

Hope it gets a second season after this.

I'd be better if they made a prequel explaining how their world came to be an oceanless hellhole.