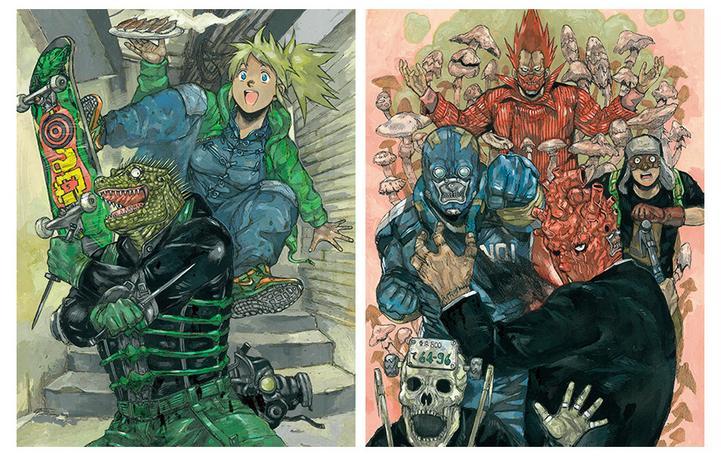 The official website of the Dorohedoro television anime announced on Sunday that the series will be released on Blu-ray in two volumes with a limited amount of special edition bundles available. The special edition of the second volume will include a 30-minute original video animation.

Volumes one and two will be released on May 20 and June 17, respectively. The limited editions will feature jacket illustrations (pictured above) drawn by the original manga creator, Q Hayashida, and digipak designs by the anime character designer, Tomohiro Kishi. The first volume will also include a bonus disc, a finger-sized replica of Nikaido's skateboard, and five stickers. Volume two will bundle a shoelace with a charm attached and the aforementioned OVA.

Dorohedoro is directed by Yuuichirou Hayashi at MAPPA. It premiered on January 13 at 12:00 a.m. on Tokyo MX and BS11, followed by MBS, and is planned for 12 episodes. Netflix is also streaming the show.

The action comedy is based on Q Hayashida's manga of the same name. Shogakukan published the 23rd and final compiled volume on November 12, 2018. VIZ Media licensed the series in English in 2009 and released the 23rd volume on September 17, 2019.

overkillsamurai said:
How do I buy this? is there an english portal to buy it through?

Amazon Japan can be switched to English and you can use the login information from your US account.

How do I buy this? is there an english portal to buy it through?