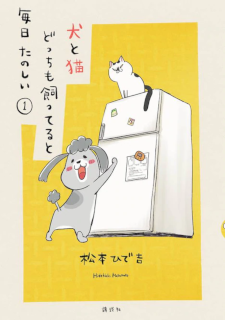 The official Twitter account for Hidekichi Matsumoto's Inu to Neko Docchi mo Katteru to Mainichi Tanoshii announced on Sunday that the series will receive an anime adaptation. The announcement displayed a manga panel showing an animation report and production meeting of the news. Broadcast and staff details will be revealed at a later date.

An encyclopedia about the ecology of dogs and cats based on this work called Inu to Neko Docchi mo Katteru to Mainichi Tanoshii Encyclopedia will go on sale on Thursday. Kodansha will release the fourth volume in the series on Friday.

Synopsis
Matsumoto-san owns an innocent dog and an adorably devious cat. Laughing and crying ensue as they all live daily life together.

The manga debuted in 2017 and is serialized on the manga app Palcy.