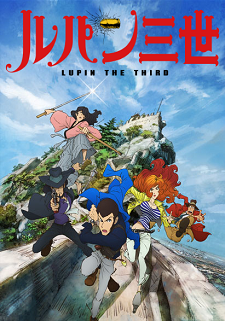 Lupin III (2015), the first series in the main Lupin III work in 30 years, will begin its Japan broadcast on October 2 at 1:29 am on NTV. The new series is set in San Marino, located within Italy.

A new preview video was launched on Wednesday and adds Rebecca Rossellini to the character line-up. Yuuji Oono, known for his musical scoring in previous Lupin III works, will return to compose for the new series. Popular enka singer Sayuri Ishikawa will perform the ending theme song, "Chanto Iwanakya Aisanai." The soundtrack and ending theme song will be released on October 21.

The new series begins airing in advance in Italy on August 30 on Mediaset's Italia 1 network.

imho part 1 - 3 are gettin' better with each part

part 4 optically takes a little getting used to. like every anime nowadays is drawn in Illustrator, imho resulting in less details, shadows, gradients, etc -_-'

Like the art style. Hope it's good. Need more LUPIN!!!!

Is there a particular reason why episode 1 was released in Italy first??

Next is Astro BOy.?!

It's a good time to be a spaghetti-fag, first 4 episodes will air tomorrow night.

Watch at least Part II and Castle of Cagliostro then your all good.

Do you know where I could watch the second part (and third part) subbed with all the episodes, besides Hulu? Or is that impossible?

finally! i will look forward. :D

I've only seen the dc and lupin crossover but I like what I'm seeing so far. Looking forward to this!

i already forgot the old lupin..
but i can still watch this.
nice art.

Watch at least Part II and Castle of Cagliostro then your all good.

I've always been curious about this franchise so I'm definitely gonna check this out.

Great news to finally have a concrete airing date.

I like how it looks, and especially the clips from the various Lupin features across time. But the theme sounds like an awkward blend of different music styles: jazz, funk, Italian music. I hope it turns out okay.

I've only seen castle of cagliostro but for some reason, I'm looking forward to this!