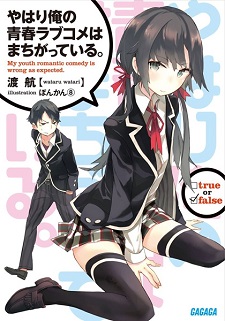 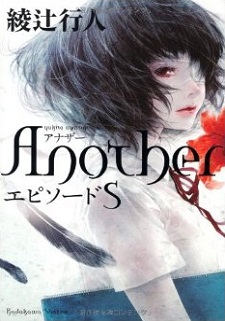 In addition to these works, the publishing company announced multiple manga licenses, including:

I was actually planning a Kickstarter to release the Baccano! light novels in English.
No wonder no one at Funimation wouldn't answer my questions. They already knew about the official release! :)

Can't wait to buy the read Oregairu. I love the anime series. I've heard great things about Baccano and I still need to get around to watching that series.

Orix said:
You can just change out "LNs" and "anime" and it doesn't change much.
Don't tell me that I have to edit what you can do mentally.
Anime is petite niche market compared to novels one, while at the same time being a lot more expensive to produce translations for. LNs need a lot less sales to become profitable to english publisher than anime. Especially nowadays when ebooks are doing crazy good and publishers don't have to worry about having books on the shelves.

Heck, most of those englihs LNs probably already sell a lot more than anime discs do in Japan.


Vindstot said:
Good news, but Yen Press will take forever to reach the Volumes Nanodesu & Kyakka covered so far. Will still collect them though.

Didn't they translate only first four volumnes? Yen is very agressive with their releases. They wiill catch up in about a year

Orix said:
You can just change out "LNs" and "anime" and it doesn't change much.
Don't tell me that I have to edit what you can do mentally.

Yes you do, because otherwise it looks like you're comparing one thing to another completely different thing. And no, that line didn't read as "light novel licensing firms" at all.

There's also the fact to consider that the market is very different now from back then - both the general book market and the fanbase.

The growth of online retail, for instance - yes online book retailers existed then and most people had internet access but it only made up a small portion of the market compared to what it does now. Series with a pre-existing but niche market gain more from this than any other, and light novels fit that bill perfectly. If you were buying at your local bookstore and for whatever reason they didn't happen to have a copy of the series or the next volume, you'd have to go up and ask them to get it in especially for you.
There's also advertising - nowadays companies can easily let thousands or tens of thousands of fans know of new licenses directly via twitter and facebook. Back then twitter didn't exist and facebook didn't have features to enable companies to use it (although many did have facebook pages anyway) - if a series was licensed it might be announced at a convention, and then fansites would post the news, which might stay visible for a couple of days before being forgotten. And of course, the conventions and the news sites haven't gone away.

Then there's the fanbase. Back in 2005/2006 the vast majority of anime fans had probably never even heard of light novels, and many of even the more hardcore fans had probably only watched a couple of light novel adaptations. The only series that was genuinely a big name was Slayers. Compare that to nowadays when there's SAO, DanMachi and No Game No Life (and series like Toradora, Durarara, Haruhi etc.) that have been watched by masses of even the more casual fans. The first stage of marketing, which was never really successful last time around, was to let the fans know that the entire medium even existed in the first place.

Then finally there's the companies releasing them - Seven Seas was a small and new manga publisher (less than 2 years old when they announced their imprint) with not much funds and somewhat eccentric licensing interests - and who, in all honesty, never really gave the industry a full chance (they probably couldn't afford to). Tokyopop was already well on the road of decline, and never showed any real love or care over their light novel releases (gaps greater than a year between one release and the next, with even people who had bought earlier volumes not realising often until years later that a later one had come out at all). Then there's Viz Media, of course, who do have the funding and position to have brought over successful series, and indeed did license some big names (Shana, for instance). Which also flopped - so I'm certainly not denying that the market back then basically failed. But there's all the factors above to think about too.

In short I guess what I'm trying to get across is that things are different now to how they were last time around.
And of course things won't always be as they are now. They could get better. Or they could get worse. There's certainly a possibility that things could yet collapse somewhere down the line.

So all that I can say for certain is that so far it has been a big success, not just for yen press but also for other companies that have released individual volumes (usually manga tie-ins), that I hope that this continues to be the case, and that I genuinely believe that it probably will be, at least for a few years yet.

All the signs are positive, so the default would be a positive (or at least existant) future. This is not guaranteed but is a more likely outcome than imminent collapse. And, of course, the more people buy the books, the more set in stone that positive future will be.

You can just change out "LNs" and "anime" and it doesn't change much.
Don't tell me that I have to edit what you can do mentally.

Orix said:
So short sighted it's saddening. You should see the bigger picture. The LN are being licenced and it's working, more and more licences are being successfully translated. Those last years are a real change in the situation of LN translation in the western countries, and Yen press is the most impressive contributor to this change. They deserve your praises, not your insults. If you're too much of a kid to see further away than the tip of your own nose, that's your own fault, not their.

Kudos to your optimism, but licensing LNs are never gonna work out in the long run.
They never did. Not in America, not globally.

If they do, then why have most anime licensing firms died out?

So short sighted it's saddening. You should see the bigger picture. The LN are being licenced and it's working, more and more licences are being successfully translated. Those last years are a real change in the situation of LN translation in the western countries, and Yen press is the most impressive contributor to this change. They deserve your praises, not your insults. If you're too much of a kid to see further away than the tip of your own nose, that's your own fault, not their.

Kudos to your optimism, but licensing LNs are never gonna work out in the long run.
They never did. Not in America, not globally.

If they do, then why have most anime licensing firms died out?

So goddamn hyped for this. Never thought I'd see the day both DRR and Baccano are licensed and officially translated.

ExscisTiC said:
I Think these things will never happen in my country.. unless when I will be very old and I still doubt about it :/

Maybe internet will save me.

I feel you...
lets hope for people having kind hearts to share what should be shared...

Oh man, I really hope they do the Baccano! light novels justice. I've gotten used to the fan translations' choices for verbal tics and names and hope they won't be too different in the official translations.

Things I hope stay the same:

That Nile's verbal tic will still be "I say this:" and not be different
That they call Tick Jefferson Tick and not Chick. I swear to God if they call him Chick I will be pissed. (I mean, his brother is called Tack (or Tock, depending on the translators) in the novels. What would they call him? Chac? Chock? Both of those are stupid. Don't fail me translators. Call them Tick and Tack. This has been a PSA.
I prefer the bartender/member of Jacuzzi's gang's name in the light novels than to the anime (John/Jon in the LNs, Ian in the anime). Please call him John...

The fan translators also did an impressive job translating Graham's lengthy monologues. Let's see how well the official translators can pull it off...

Omg im drowning in my own juices! Been waiting for english baccano books since 2010! Just take all my money Yen press!

Yay for Baccano, I'm going to collect them in the future because I'm currently collecting the novels of Durarara.

Thank you Yen press for licensing Sekirei super awesome news even if its digital its still good news, we might get it in print in the future, Baccano and Oregairu are definitely going on my shelf.

nitrohawk said:
Baccano! coming out in English. Who would of thought that this day would come.
I hope it sells well and brings with it a second season.

BeatzYou said:
kuuurt said:
Seiryuu2 said:
It will take forever to reach the Volumes Nanodesu & Kyakka covered so far.
Exactly why I'm surprised people are actually happy about this. You can read Yahari online RIGHT NOW instead of waiting 10 billion years for Yen Press to actually catch up to Volume 11. Now Spyro's gonna stop his translation (like what the DanMachi translator did) and we're stuck here looking at spoilers and amateurishly translated scenes.

Yes, you'll get a physical, translated copy of Yahari... in like 3 years. As if you'll be as hyped as you are right now about the series, amirite.

I just hope Kyakka continues translating, even if it's thru underground means.

I really couldn't agree more and this was literally my first and only reaction to this. We were so close to the conclusion and now this will probably kill the fan translation, leaving us with the cliffhanger of the second season and the choice of either waiting a few years for the translations catch up or the final to adapted into anime or read spoilers.
I wish I could say that this was good news to me, but with the above concerns, I simply can't.
But don't they speed up releases if its selling well? Cause Pandora Hearts came out pretty quickly the same with Kuroshitsuji.

kandiiyuutaamu said:
Were there other LN's they translated before or are they going to start with these two???

Were there other LN's they translated before or are they going to start with these two???