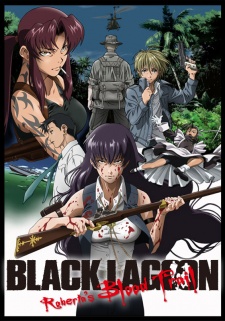 According to Monthly Sunday GX August issue, "Black Lagoon 3" was announced to be released as an OVA (or OVA series) in 2010. The original staff and the cast produce the OVA.

Black Lagoon first and second season will be released in Blu-ray. The extra manga chapters published at the end of the comic books will be animated and included in the Blu-ray as specials.

The volume 9 of the manga will be released on October 19th. The rest of the "El Baile de la muerte" chapters will be published in one volume.

yeah, one of the best animes I've seen for a long time. It's been nearly 2 years now that the OVAs have ended, is there anything new?

Has there been any other news concerning Black Lagoon recently?

where the hell are the manga chapters?!?!

these arnt just the "OMAKE" s are they ?

I am STOKED,
bring it on

This arc was amazing in the manga, and since it's gonna be and OVA the quality probably will be top-notch! Can't wait to start translating it!

Ya I can't wait for this to come out but people if you want to support Black Lagoon and give someone a reason to dub the new stuff in English then you really need to purchase the DVD's. You can currently get the first 2 seasons with extras for only $40. You can purchase it from the official website http://www.funimation.com/blacklagoon/
Also I highly recommend anyone to read this article "Why You're KILLING ANIME" an interesting Article from Toonzone forums! http://www.toonzone.net/blog/blogs/228/why-youre-killing-anime/

OH so there is the third season i thought it was just a fake info!!O_O

i haven't seen the series in the sequel list in black lagoon.
The youtube link is dead btw

I can hardly contain myself with the anticipation I'm feeling at the moment, July just isn't going to come fast enough.

Yep its out now,its on volume 8 of the blue-ray so we gotta wait for the torrent of it or for it to get on youtube.

here are some screenshots though

Can't wait for the BL OVA!

i dont have any problem with it being an ova, and if you look on the bright side, the animation will probably be even better than the other series. plus, no point creating a whole new 12 episode season for one arc. the manga has pretty much just started moving into another arc so its either a) take the ova or b) wait another who knows how long for a true 12 episode season. and considering the manga is published MONTHLY you guess how long it will take to for them to announce a new season. ya ova is looking pretty good now huh.

as for bluray, since i can get the dvd for both seasons without having to order online, ill just stick with that.

Lets hope the third is as cool as the first two seasons :>

Oké! Haha, I thought they would never get it finished...

Source: Scan of GX
Thats great news and the release date was actually a bit earlier than I was dreading it might be. I wonder how long each volume is going to be but I suppose 5 volumes is enough to cover the arch.