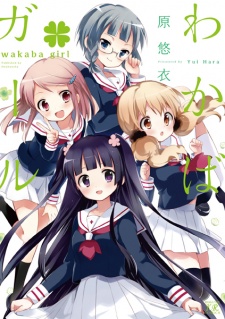 A scan made available of Manga Time Kirara Max magazine's May issue revealed that 4-koma manga Wakaba*Girl will be adapted to anime.

The short TV series will premiere as part of the new Ultra Super Anime Time programming block on Tokyo MX and BS11 in July. Thirty minutes in length, Ultra Super Anime Time will consist of 3 ten-minute shorts. The previously announced third season of Wooser no Sono Higurashi will also fill one of the three airing slots.

Three chapters of Yui Hara's Wakaba*Girl were serialized between 2010 and 2011 in the Otome Tsuushin anthology series by publisher Sousaku Koubou. In 2013, they were compiled by Houbunsha and published in a single volume, along with the fourth and final chapter.

The 4-koma series is about a young girl named Wakaba Kohashi, who has an elegant air befitting her given name, meaning "fresh leaves." Despite her looks, Wakaba is fascinated by the gyaru subculture, a label applied to fashion-conscious young women who typically have bleached hair, tanned skin, and heavy make-up. This story follows the daily life of Wakaba and her friends, and the time that they spend together.


Update March 21
The main staff list of Wakaba*Girl was announced at AnimeJapan.

What's there to promote???

Yep.
Well, I love slice of life Anime.
I can see that MAL is improving, huh. They have pictures now beside the announcement.

Oh more diabetes xD
But.. but I want Karen-desu! xD

Jaeger07 said:
Welp, I came here expecting to see that Azusa's band after K-On, Wakaba Girls, will have their own anime series. Guess it's not haha.
I didn't even think of that. Seeing K-ON! Highschool having an adaptation would be nice. Tbh I like it better than the original.

Welp, I came here expecting to see that Azusa's band after K-On, Wakaba Girls, will have their own anime series. Guess it's not haha.

Alright this will be a fun watch.

Will skip it for now, may watch it later
Kiniro Mosaic 2nd season is enough for now.

Looks so cute. Will definitely be watching :3

I don't see the point in it because it's so short...but it's still nice. If this manga can get an adaptation at only 1 volume, surely others can.

*still vaguely hoping for Alice Quartet Obbligato to get an adaptation*

Heart melting character designs, I need to read this manga real quick, also I will watch the anime despite it being only 3 episodes long.

Damn this looks kawaii as f*ck

It's unfortunate this anime will be a short one, but....

So the episodes will be 10 minutes long? Sounds like actually a pretty good lenght for that kind of simple anime...

I love Kinmosa so I'll surely watch this too. I'm also interested to see how they picture gyaru culture in moe anime xD

And now they have 5 upcoming anime, kirara is on a roll.

Kin'iro was kawaii, so definitely gonna check this out too.

What's there to promote???

Seems cute. Sure, I'll watch it.

Wakaba*Girl?? I didnt even heard of that Manga.....

I want 2nd season for Himegoto