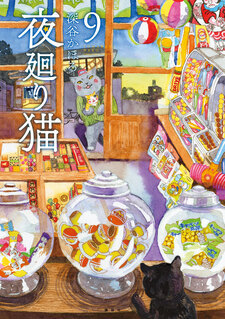 Manga author Kaoru Fukaya announced a television anime adaptation for her Yomawari Neko manga on her official Twitter on Tuesday.

Fukaya began drawing the short slice of life manga on her Twitter account in October 2015. The manga was later serialized in Kadokawa's ComicWalker from February 2016 to July 2016. Kodansha continued serializing the manga on their Moae platform from March 2017 until October 14 before moving to the blog of Comic Days on October 17. Kadokawa initially shipped the first volume in June 2016. Kodansha re-released the first volume in March 2017 and continued publishing the following volumes. The ninth volume shipped on November 22.

Yomawari Neko won the Short Work Prize at the 21st Tezuka Osamu Cultural Prize in 2017. The manga has over 630,000 cumulative copies in circulation.

Synopsis
The story of a cat who's drawn to the scent of tears and goes to those who are crying in an attempt to comfort or encourage them. (Source: MU)

#9
nnoraa123
Offline
Nov 2022
1
Because life is in the septic tank for everyone we need it.
One bad thing about this game is that it consumes more energy. Because gaming laptops use high watts.

Offline
Mar 2013
7145
yamiyugi101 said:
Tokoya said:
A lot of wholesome shows are being greenlit these days

You're absolutely right, and I approve 100%
#11
yamiyugi101
Offline
Jan 2016
306
Tokoya said:
yamiyugi101 said:
Tokoya said:
A lot of wholesome shows are being greenlit these days

You're absolutely right, and I approve 100%

Same plus I'm burned out by all of the nihilist shows out there I need some positiveity in my life
Tokoya said:
yamiyugi101 said:
Tokoya said:
A lot of wholesome shows are being greenlit these days

You're absolutely right, and I approve 100%